Gail Pettis is a remarkably original song stylist who does not bring to mind Billie or Ella or Sarah or any other vocalist, past or present. In jazz, she found an ideal outlet for expressing herself as an individual. “It feels like I’ve been looking for this all my life,” she explains. “Jazz invites you to be yourself, and that really appeals to me. You’re not required to sound like anyone else nor do you ever have to sing a song the same way twice. Jazz only asks that you live in the moment. That is tremendously freeing.”

Gail was born in Henderson, Kentucky, on May 30, 1958 and grew up in Gary, Indiana. As a child, Gail sang classical music and hymns at a local Presbyterian church and continued to perform in other school and church ensembles in later years, including several years of playing the french horn. She was surrounded by healthcare professionals, yet there was also music in the family tree. Grandfather Arthur Pettis was a blues singer and guitarist who recorded for Victor Records in Memphis in 1928 and for Brunswick in Chicago in 1930. Her grandmother, Ninevah Pettis, played piano in the Chicago area. A latecomer to jazz, Gail began singing jazz in 2001 but quickly made up for lost time. Seattle’s Earshot Jazz magazine named her “2007 Northwest Vocalist of the Year,” and her debut CD, May I Come In?, issued that year by Origin/OA2 Records, received a warm reception by XM Satellite Radio and Music Choice Television, stations across the United States and also in Germany and Portugal. She has also performed at the Gene Harris Jazz Festival in Boise, Idaho, the Amersfoort Jazz Festival in the Netherlands, and in Kobe, Japan, as winner of the Seattle-Kobe Sister City Association’s Female Jazz Vocal Audition in 2006.

Jazz in the Valley - This Weekend

Gail Pettis and Hadley Caliman Racing up the Chart

"Here in the Moment": 2nd CD from Seattle Singer Gail Pettis Due Jan.... 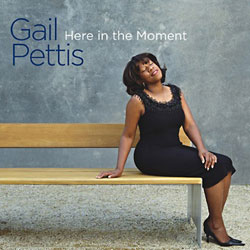 Here In the Moment

From: May I Come In?
By Gail Pettis

All About Jazz musician pages are maintained by musicians, publicists and trusted members like you. Interested? Tell us why you would like to improve the Gail Pettis musician page.