Vocalist Kellylee Evans continues to evolve her distinctive sound with her newest release Nina. This Juno and Gemini Award nominee received accolades for her first two albums, Fight or Flight and The Good Girl, which seamlessly fuse jazz and her own unique style of "soul pop". Nina, her new release, is a beautiful tribute to one of jazz's greatest vocalists and pianists, Nina Simone.

The Canadian singer was approached by French label Plus Loin Music, who had discovered her through her 2nd place win at the Thelonious Monk Jazz Vocals Competition. After several years of discussion, they invited her to France in November of 2009, where she spent two days in the studio. "They said I could do whatever I wanted as long as it was standards" Evans recalls. "I had always wanted to do a Nina Simone tribute. She was one of my mom's favourites, and my husband's, and I love her too. So I chose her and they were really gung ho."

Evans' love and respect for the original recordings of the music shines through, but, even in taking on some of Simone's most iconic repertoire, the twelve tracks on the album showcase Kelly's own versatility, creativity and innate musicality. She is reunited with guitarist Marvin Sewell (Jason Moran, Cassandra Wilson), who appeared on her first album, and joined by bassist François Moutin (Moutin Reunion Quartet, Rudresh Mahanthappa), and drummer André Ceccarelli (Dee Dee Bridgewater, Biréli Lagrène).

Singer Kellylee Evans Interviewed at All About Jazz 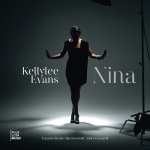 From: Nina
By Kellylee Evans

All About Jazz musician pages are maintained by musicians, publicists and trusted members like you. Interested? Tell us why you would like to improve the Kellylee Evans musician page.