Celia Chavez worked non-stop in both Seattle and New York as a session vocalist, a backup vocalist, a songwriter, a jingle writer, and a musician. She co-wrote and has vocals featured on European trance hits by Cosmic Culture as well as Swiss producer DJ Spoke. She sang with reggae legend Burning Spear on his Grammy-nominated album Our Music and is featured in the studio footage of the album's DVD. Celia recently sang backup with Julia Fordham and violinist Lili Haydn.

Celia penned the majority of the songs on Sailor's Daughter in her tiny Queens apartment. The album is a collection of jazz informed meditations on love, remoteness and longing partly inspired by the life and adventures of her father, a former merchant seaman. These retro-modern songs combine jazz roots with cabaret smarts, inviting rhythms, and engaging lyrics that showcase her warm voice.

Since her move to Los Angeles, Celia has already collaborated with producers and writers such as Robin Danar, Mark Goldenberg and Nick Mancini. She's made her entrance into the Los Angeles live performance scene with shows at the Hotel Café, the Edison, and Genghis Cohen.

"This album is equally appropriate to be listened to with your morning coffee as well as a late-night glass of heady red wine. The songwriting, singing and musicianship are all outstanding!" --LJ Murphy, singer/songwriter

"A truly attentive artist who colors the map of her imagination with nods to many musical styles. Her songwriting is irresistible...each song is its own wave of emotion." --Elizabeth Murphy, indie filmmaker 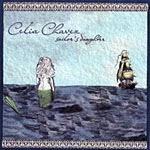 All About Jazz musician pages are maintained by musicians, publicists and trusted members like you. Interested? Tell us why you would like to improve the Celia Chavez musician page.