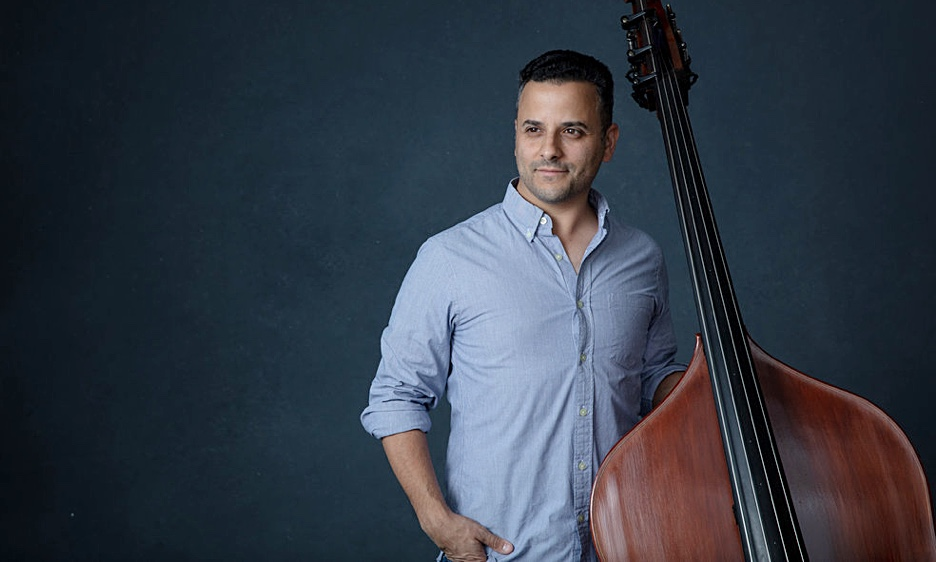 A mainstay on the New York jazz scene, bassist Pete Coco recently released his debut album as a leader, Lined with a Groove, featuring drummer Matt Wilson and pianist Sullivan Fortner. The LP is an homage to his mentors and influences, with fresh arrangements of tunes by bassists including Ron Carter, Milt Hinton, Ray Brown, Charlie Haden, Paul Chambers and more.

Pete holds a DMA in Classical Performance from Stony Brook University and a Masters in Jazz Studies from SUNY Purchase College. He is an adjunct professor at Hofstra University on Long Island, where he teaches bass lessons, lectures on American music, and directs the chamber music program. He is also director of the Music Academy of Garden City, a music school he founded in 2006, and an avid photographer who catalogs his fellow musicians both in the studio and live in concert.

Acoustic and electric bass. I am extremely blessed to play on a German bass circa 1850 which previously belonged to Milt Hinton. It is the "Chicago Bass" which was his first instrument and used extensively throughout his career. I also play on a Seth Kimmel bass which was built to my specifications in 2015.

My biggest influence is Ray Brown. When it comes to time, tone, and taste—I think he has had the greatest impact on me as a bassist and band leader. Ray's trio records are some of the best trio records, hands down. Each one is an education on how a bassist should run a band. Besides Ray, my current teacher Ron Carter has had the deepest effect on me. Studying with Ron has revolutionized my approach to music, and how I think about the role of the bass in my hands and in the band. Ron is also one of the most nurturing and kind souls I have encountered, and an example not only as a musician but as a person. Outside of the low end, Matt Wilson has been a mentor to me for many years, and is a constant encouragement to me. Living in New York, I have also had the great fortune to study with some of the best jazz and classical bassists in the world, including Todd Coolman, Doug Weiss, Rufus Reid, Harvie S, Kurt Muroki, and Carlos Castillo. Most important in my development was my first jazz bass teacher, Bob Bowen, who passed tragically and far too early.

...I heard Paul Chambers walking bass line on "If I Were A Bell!"

I have always regarded sound, meaning tone, as paramount. To paraphrase Ray Brown, our most important job as bassists is "not to play fast or play solos, but to get a good sound." Practically speaking, this means developing a warm, round tone with excellent intonation and sustain, and with a swinging beat. This is what the rest of the musicians want from the bassist, and I think it is even more crucial when working with a singer. My tone as the bassist should complement the sound of the human voice, not distract or take away from it.

My teaching philosophy can be summed up in two words: Go practice! Although I am being facetious, there is no substitute for putting in the hours. When I was younger, I thought that people were either talented or not, and there was nothing one could do about it. It took me many years of struggling in the practice room to develop the foresight to realize that I had accomplished every musical task I set my mind to, as long as I was willing to put in the work. One day it dawned on me that I had become a pretty darn good bassist, and early on I didn't think I had the talent to excel in jazz or at the double bass. It is sad that our society places such an emphasis on talent over hard work -so I try to instill this in all my students from their first lesson on.

I have a bunch of dream bands! I would love to play trio with Benny Green and Jeff Hamilton, since their records with Ray completely blow me away to this day. In my opinion, these are two of the most swinging cats on the planet! The band I assembled for my record was a dream band as well—Matt Wilson on drums and Sullivan Fortner on piano. It's impossible not to sound great with these two gentlemen, and their expertise is only eclipsed by their tastefulness as artists. It is a joy and honor to share the bandstand with them. I would also love to play with the Vanguard Jazz Orchestra someday, and playing a bass duo with Christian McBride is on my bucket list! But, Cecile McLorin Salvant is at the very top of my list—I would love the chance to play in her band. There is nothing more satisfying to me as a bassist than to accompany a wonderful singer.

I toured with a drummer who is a good friend but will remain nameless for the sake of this silly story. We always drove together, and he is one of the funniest guys I know, but, he loves heavy metal music. So, for hours on end, while driving through the endless flat plains of the USA, he would blast some of the heaviest bands you can imagine... whether it was day or night! You don't really know the road until you have experienced trying to sleep in the passenger seat of a car while the driver screams along to Slayer while simultaneously playing drums on the steering wheel at 3AM!

I had the opportunity to perform at the Teatro Olimpico in Vicenza, Italy, which was constructed in the 16th century. The theater has a Roman design, with majestic statues and columns in an elliptical pattern around the hall. The stage was designed with an optical illusion that simulates a long series of streets, so it seems as though you can walk right through the back of the stage. Any description fails to portray the grandeur of the theater and courtyard.

This is an easy one to answer since I recently released my debut album as a leader, Lined with a Groove. It was a labor of love into which I poured my heart and soul. I spent a great deal of time choosing tunes, writing arrangements, and trying to use all the lessons I learned from my mentors to create a cohesive statement. Since I decided to make a record of (mostly) tunes by bassists, this presented an additional challenge. I think it is more difficult for a bassist to release an album as a leader since people in and out of the jazz community do not necessarily regard bassists as frontmen in the same way we look at horn players or pianists. So, I although I wanted to pay tribute to my mentors and influences, I did not want a disc that was a niche album for bass players, nor did I want to record the same few (although great) tunes we bassists are known for playing, like "Tricotism"or "Visitation." Because of this, I purposely picked tunes I love that are lesser known, but demonstrate that bassists are some of the most prolific composers in jazz. I made sure to carefully arrange the tracks so that the album is a cohesive listening experience and complete statement, which I feel is becoming a lost art in our digital download world. I am thankful and pleased to say that I have received an overwhelmingly positive response to the record so far, and people have commented that they appreciate the tune selection and programming.

I am not sure that there is one "most important" contribution I am making to the music. I think that is for others to judge, as they see and hear me. I also feel that each time I pick up my bass, whether at a gig, recording session, or even in a lesson, it is an opportunity to contribute to the music. You never know who is listening, or what impact you will have on those around you. I think it was Elvin Jones who said that he plays every gig like it's the most important one, and I try to do the same.

I am an avid photographer, and when I am not playing my bass I am photographing other musicians either in the studio or on the bandstand. In a way I am trying to follow in Milt Hinton's footsteps. Besides being one of the baddest bassists in jazz, he took somewhere in the neighborhood of fifty-thousand photographs of other musicians! I have done quite a few promo shots for musician friends, and actually just did an album cover for my good friend (and monster tenor player) Sam Dillon. It was a true honor that he chose one of my photographs for the cover of his record. I am also a huge sci-fi nerd, and can tell you so much more than you ever wanted to know about Star Trek!

Cécile McLorin Savant's Dreams and Daggers has been at the top of my playlist for quite a long time. For me, her music represents the pinnacle of improvised jazz music. She has a healthy respect for and a deep knowledge of the art form, but she is constantly pushing it forward and making it new—making it her own.

I think that the easy answer is to say that jazz is in a state of decline. In the United States, it's hard to argue that art in general is not in a state of decline. But I also feel that there are many people who continue to push the music forward and preserve it for the next generation. The funny thing about jazz is that most people do in fact enjoy the music, even if they do not realize it.