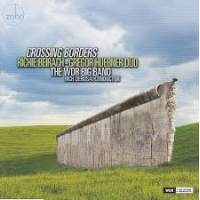 Richie Beirach, Gregor Huebner and the WDR Big Band. Now there's a triumvirate that speaks to enormity and nonconformity. On Crossing Borders, the revered pianist, the style-skirting violinist and the boundary-pushing large ensemble join forces for a program that's both crafty and dynamic, playing to past glories and present tense all at once. Tied to no single space or school, the album is wholly reflective of its title.

Highlighting the compositional strokes of two vastly different composers, the WDR Big Band proves to be a pliant force. Bierach's compositions, arranged by Rich DeRosa, come at intervals, opening the album, appearing at its center and serving as a one-two finish. A concise medley of "Rectilinear" and "Paradox" acts as a punchy and swinging greeting. The mid-album "Snow Leopard" is Beirach confronting Beirach, as the pianist addresses wild transcriptions / expansions of his own soloing from eons ago. The moving "Elm," looking four decades back, proves poignant in its passing of the torch—from a chorale introduction to John Goldsby's bass spot, and Huebner's meeting with guitarist Joachim Schoenecker to Beirach's ruminations. And the "Pendulum" closer hits and swings hard before bringing Huebner to the center for an eye-of-the-storm break and a rocking finish.

Separating those heady pronouncements are Huebner's contributions—a pair of three-movement works that artfully merge modern classical and jazz identities. "Concerto No. 3" showcases its composer and the ensemble in evolving emotional landscapes. "Kathmandu" kicks things off, sewing reflection, raw emotion and drive into a single patchwork piece; "The Grave" follows with a tightrope walk over tension and dissonance; and "Two Thousand 15," both resolute and uncertain, eventually rises skyward. The second of the large scale pieces— "Piano Concerto No. 3 The Code'"—operates on a different plane. Borrowing Bierach's nickname, the piece showcases the mystery behind the man. "Into The Quest" nods toward his most famous quartet gathering in title and spirit, "It's Enough" derives beauty and shapeliness from a German Lutheran Hymn, and "Born In Brooklyn" speaks to the pianist's origins in swinging fashion.

On one level, the takeaway here has everything to do with the majesty of three mighty entities. But on a larger scale Crossing Borders is an act of convergence. It's in the meeting(s) that the real magic comes to be.