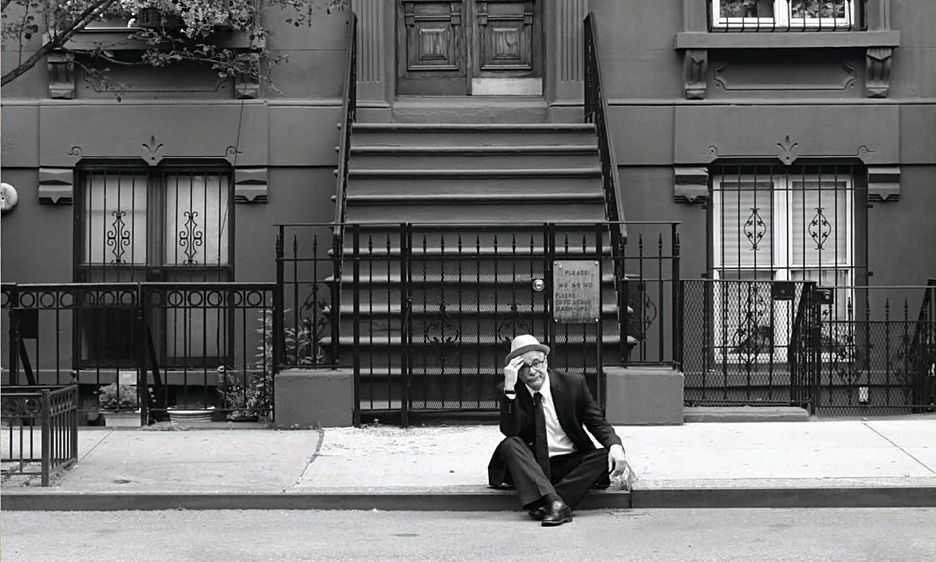 By EDWARD PALERMO
October 9, 2019
Sign in to view read count

Ed Palermo is an arranger, composer and alto saxophonist mostly known for his big band and their interpretations of the music of Ed's hero, Frank Zappa. Coming out of college in Chicago, his initial plan was to become a great jazz tenor saxophonist in the vein of Michael Brecker, Steve Grossman and Dave Liebman but reality reared its ugly head, at which point Ed realized he was more interested in composing and arranging.

Though completely self-taught in writing and improvisation, Ed has learned everything he knows about arranging by listening to the mastery of such people like Frank Zappa, Nelson Riddle, Bill Holman, Les Hooper, Bob Mintzer, Todd Rundgren, Brian Wilson, Dave Lalama, Neil Young, Thad Jones and Edgar Winter to name a few.

After putting his tenor sax away, he turned to his first love, the alto sax. Initially inspired by the stylings of Edgar Winter, Ed eventually fell in love with Edgar's alto heroes, Cannonball Adderley and Phil Woods. Jackie McLean was also a great influence on Ed's playing.

Through the years, The Ed Palermo Big Band has added many other artists' music to its repertoire. His albums cover the gamut from straight-ahead jazz to Chicago Blues to British Prog to Fusion to The Beach Boys, and many other genres in between. Just about every CD has earned a four start review in All About Jazz, Downbeat and other major jazz publications.

Commissioned by Christian McBride and Melissa Walker, Ed wrote a twenty minute suite of Wayne Shorter's music for the New Jersey Ballet. Ed and Christian also wrote arrangements for a concert at the Hollywood Bowl for one of James Brown's final shows.

I play a Selmer Mark 6 alto sax. It was born in 1972 and though it is quite war-torn lo these many years, it is my baby and I love her. My mouthpiece is a hard rubber Meyer with a 6 opening. Someday I plan to research exactly what that means. For years, I used Rico Jazz Select size 3 but in the last few years, my chops have been complaining, forcing me to go down to a 2.5.

For arranging, I use Sibelius for music printing and an Apple computer. You know, just like Beethoven.

As mentioned above, I am totally self-taught. The reason for this is quite simple. I learned early on, if you want to get your feelings hurt with harsh reality, get yourself a teacher. But if you prescribe to the "ignorance is bliss" theory, then teach yourself. This worked well for me until I started teaching. At that point I realized how much I COULD have learned if I wasn't such a big baby.

That said, there is something to be said for letting your heroes do all the teaching just by listening to their music. Frank Zappa (who I never met) is my main source of knowledge and inspiration but I was lucky to have people like Dave Lalama, Les Hooper, Bob Mintzer and Tim Ouimette (great trumpet player/arranger) to ask questions when I desperately needed help.

I knew I wanted to be a musician when The Beatles came into my life. It was 1964 and the two most exciting things happened that year—The Beatles and Cassius Clay. The Beatles on Ed Sullivan set me on my path of an eternal lust for music. I was in fourth grade, having just started clarinet lessons. My teacher hated the Beatles, preferring Richard Wagner. You know, Hitler's favorite composer. This lead me on a path of devoutly worshipping the Beatles while just as devoutly ignoring my teacher.

When I first saw Frank Zappa live in Philadelphia in 1969, that sealed the deal for me. I wanted to BE Frank Zappa.

As an alto player, I totally attribute my sound to Cannonball Adderley but I have to say that I have to give almost equal credit to Chuck WIlson. Chuck recently passed but he left a great legacy for me because HE sounded so much like Cannonball. So I not only listened to Adderley constantly but my lead alto player (Chuck) gave me a ton of live examples of how to sound like that. Just by listening to him at rehearsals.

When I play R+B, I find myself playing like David Sanborn a lot. And Edgar Winter.

As an arranger, if I'm writing a swing chart, say Sinatra type thing, I go for a Nelson Riddle style. I've transcribed a ton of that music for a society band (glorified wedding band) for many years, so I know the terrain. But when I'm doing a genre that is not known for a big band treatment, then I can approach it any way I want. THAT is the most fun and rewarding.

When I started teaching, it was to sub for my good friend (and amazing alto player) Laura Dreyer. It changed my life. At the age of 53, I realized that everything I taught myself through the decades, much of it being REALLY difficult and time consuming to figure out, I could teach someone else in SECONDS. I was soon teaching full time and loving every minute of it. I was even able to stop playing in wedding bands (glorified society bands).

My philosophy on teaching is pretty simple. Make the student laugh a lot. Make him or her WANT to come back the next week. I teach by example so I'm constantly playing for them, something my classical teacher in college NEVER did. I'm always taking apart scales and arpeggios and having the students play the notes in a different order. That's pretty much what improvisation is anyway, right? Knowing what notes are "legal" to play and switching around the order while playing a variety of rhythms.

This may sound gratuitous, but I already HAVE my dream band. Really. I cannot imagine my music played any better than what these musicians give me. I am truly blessed. But let's say I was going to do an album with a small band featuring me on alto. And I wasn't allowed to use my regular players. Hmmm. It would depend on the type of music I was going to record but I can definitely say Christian McBride on bass, Billy Drummond on drums, Dave Stryker on guitar, and Nicki Denner on piano. With Nicki (a GREAT jazz pianist), I could have her husband Anton Denner (an equally great alto saxophonist) erase then overdub my sax solos. Win-win.

My favorite stories are always the ones that are almost too embarrassing to tell. Like this one: I was playing sax in a band and before our next rehearsal, the leader of the band said it wasn't necessary for me to come to that particular rehearsal because they were just running vocal stuff. I showed up anyway. Big mistake. I got there a little late, so when the door to the rehearsal room opened, I hear this magnificent, thunderous tenor sax. I realized then I was being replaced. Thank God no one in the band saw me. That saxophonist, btw, became quite famous. His name is Tim Capella and he is really good. Good guy, too, I found out years later. He's the guy you see in the Tina Turner videos. Big muscular dude. Played with Peter Gabriel, too. Hmmm. Maybe I lost the gig because my muscles weren't big enough. Food for thought.

I only play two venues these days, so I'll say Iridium in NYC (once a month) and The Falcon in Marlboro, NY (once every two months). I love both venues. The Falcon is interesting because there I get to put on an actual show with dialogue, costume changes, and all sorts of insanity. Zappa did something like this in 1967 at the Garrick Theater in NYC. I feel like I'm carrying on a tradition.

The smart answer is the CD that's out NOW (ca-ching). It's hard to say because every CD is entirely different than the one before. My third Zappa CD, Eddy Loves Frank, is up there because I really went nuts with re-structuring Zappa's original conception.

Probably that I'm doing a lot of music that most people wouldn't expect out of a traditional big band setting. Zappa's music really lends itself to this instrumentation, so I wouldn't say that I've started anything new there conceptually, but Procol Harum, Jethro Tull, Yes, The Beach Boys, Emerson, Lake & Palmer, and King Crimson—it may serve to open up possibilities in some people's minds. Currently, I'm arranging a lot of Captain Beefheart's music. That's a REAL education for me!

That my favorite form of entertainment is hypocrisy. I can't get enough! The people running the government now supply TONS of first-rate entertainment.

The first JAZZY album I bought was Edgar Winter's first album, Entrance. It has a lot of jazz on it even though it wisely wasn't promoted as a jazz album (non-ca-ching). Zappa's early albums had some great jazz on them, too, but as I recall, my first real jazz album was probably a Riverside re-issue of Cannonball Adderley music.

I truly think jazz is in a GREAT state these days. I get bugged when I hear people say, "There aren't any John Coltranes anymore!" The players and writers out there now are SO great and SO passionate. Writers like Maria Schneider and Darcy James Argue are contributing amazingly beautiful and original music. And the players? WOW! I get to hear a lot of the young players when they sub in my big band. Some of these players are destined for greatness. Dan Glaude on alto sax, Drew Vandewinckel on tenor, and Bobby Spellman on trumpet. Fantastic players who know the radiation inside and out and are blazing new trails. And the players who have been around awhile are playing better than ever—Ralph Lalama (no relation to Dave Lalama), Richard Perry, Donny McCaslin. And I could name dozens more.

I have at least three CDs in the can right now. I have a third volume of British Prog (The Great Un-American Songbook Vol. 3), a CD of Edgar Winter tunes including the aforementioned "Entrance," and an album of my favorite fusion songs by Tony Williams, Chick Corea, and many more. For live shows, we're still playing Iridium once a month and Falcon every two months.

People not showing up. On either side of the stage.