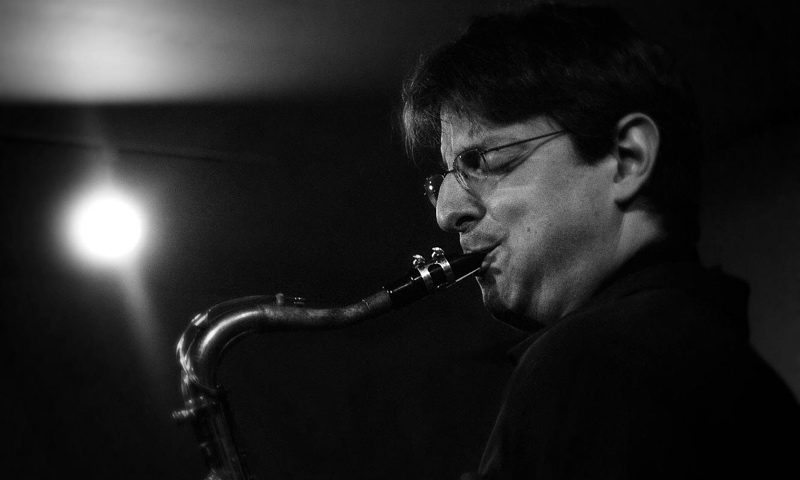 By ADAM SCHNEIT
January 4, 2017
Sign in to view read count
Meet Adam Schneit:
Saxophonist, clarinetist, and composer Adam Schneit grew up in Portland, Maine, and has made Brooklyn his home since 2006. He earned a Master's degree in Jazz Performance from the New England Conservatory of Music, where he studied with esteemed artists including Steve Lacy and Bob Brookmeyer. Since moving to New York, he has contributed to the work of performers in a range of genres, from jazz musicians to singer-songwriters. Among the creative artists he has made music with are Kenny Wollesen, Sean Moran, Eivind Opsvik, David Ambrosio, George Schuller, Jacob Sacks, Chris Lightcap, Vinnie Sperrazza, Devin Gray, Flin van Hemmen, Sunny Kim, Heather Masse and Sofia Koutsovitis. He leads the Adam Schneit Band, was a co-leader of Old Time Musketry, and regularly plays as a sideman in a number of groups, including the Anna Weber/Angela Morris Big Band and the Jesse Peterson Quartet. He also played on the soundtrack to the Oscar-nominated film, Beasts of the Southern Wild. The music of the Adam Schneit Band combines freewheeling, visceral improvisation with the melodic directness of rock and folk music. The band (featuring Sean Moran, guitar; Eivind Opsvik, bass; and Kenny Wollesen, drums) released its first album, Light Shines In, on Fresh Sound New Talent in December 2016.

Teachers and/or influences?
Keith Jarrett and Bill Frisell are huge for me, largely for their abilities to play lyrically and vocally in any context, from the most serene to the most chaotic and exploratory. All the members of Keith's American Quartet, Dewey Redman, Charlie Haden, and Paul Motian, showed me what it means to truly play with your own voice, fearlessly, without any filters or posturing or pretensions. I saw Frisell in high school with Kermit Driscoll and Joey Baron, and the joy that they expressed in playing with each other, as well as the way they seemed unfettered by genre (putting a Madonna song beside a Sonny Rollins tune), really opened my eyes to the essence and boundlessness of music. Neil Young, Lucinda Williams, Elliott Smith, Stevie Wonder have all strengthened my appreciation for the depth, mystery, and elusive magic of song. And of course, there are many saxophonists who have taught me about sound, lyricism, and passion, from Lester Young to Ben Webster, Sonny Rollins, Gene Ammons, Dewey, and Chris Speed.

I knew I wanted to be a musician when...
My teacher in middle school, Ray Morrow, gave me a tape of Phil Woods playing "Out of Nowhere" with a big band. I had never heard an alto saxophone played so passionately and expressively. It gave me chills and, if I'm being honest, the realization of a sense of spirituality that I hadn't been aware of before. I felt that if I could get anywhere close to making people feel how that solo made me feel, I'd be doing something good!

Your sound and approach to music:
My taste is super varied, and I love a lot of rock, singer-songwriters, country and folk, and other musics in addition to jazz. I know that's not unusual. But I think my writing is generally more informed by the kinds of melodies and harmonies you'd hear in a rock song than in a modern jazz tune. The harmony is largely triadic and I try to create melodies that are stripped down and have a vocal quality and (hopefully) an emotional resonance that stays with you. Some of the music is very song-structured, while some is more of a vehicle for open improvisation. But I try to make sure it all has a foundation in strong melody.

Your teaching approach:
I don't teach much these days. But when I have taught, the focus has always been on developing a strong and personal sound on the instrument, and training your ears as the primary way to approach improvisation. There is so much that can be learned just by singing and learning solos, playing tunes in all the keys by ear, practicing slowly, and honing your intuition rather than adhering to theoretical rules of what should "work."

Favorite venue:
I really like Threes Brewing, where I'm playing the release show for my album, Light Shines In. It sounds great acoustically and is small and intimate enough that it doesn't feel like there's a distance between performer and audience. It's based on the old basement of Sycamore, which is another one of my favorite rooms.

Your favorite recording in your discography and why?
I guess it would be the current one, Light Shines In. Maybe because it's the only one? (As a leader and not a co-leader or sideman) But seriously, I'm proud of how well the band brought the music, which is fairly simple in its structure, to life and imbued it with their own energy and voices. Sean Moran (guitar), Eivind Opsvik (bass), and Kenny Wollesen (drums) all have such rooted and personal sounds, and the way they listen and support makes it so easy to play. The album covers alot of breadth, from melodic rock tunes to things that are alot freer, but I think the way the band plays together makes it cohere and sound like a real album and not just a collection of songs.

What is in the near future?
Playing the album release for Light Shines In at Threes Brewing on Thursday, January 19th, and writing more music and playing shows with this band and others.