Vinnie Sperrazza is a Brooklyn-based jazz drummer. His first album as a bandleader and composer, Apocryphal, was released by Loyal Label on Tuesday, September 9, 2014. Originally from a small town south of Utica, New York, Vin moved to NYC a million years ago, just after the glaciers melted but before Tower Records closed. He's played lots and lots of good music with many amazing musicians, but he feels really self-conscious about dropping names and all that so he's just not going to do it, save mentioning the late great Mr. James Williams, pianist, with whom Vin played many memorable concerts. He feels incredibly lucky to have music in his life, to be able to work with great musicians, and to be able to present his music to an appreciative audience. He's in lots of bands, spent the summer of 2014 as an actor (he played a drummer- not much of a stretch), is on some cool records that have either just come out or will come out this year (Dana Lyn/Vincent D'Onofrio Slim Bone Head Volt, Jacob Garchik Ye Olde), and as of this writing, just got off the road with the band Hearing Things, led by Matt Bauder

It is mostly troublesome to make blanket assertions about jazz and the musicians that facilitate the art form. Such assertions are subjective at best, yet it would not seem unreasonable to assert that Caleb Wheeler Curtis is one of the more interesting alto saxophonists to emerge since 2000. His playing has a radiant, vocal quality to ... 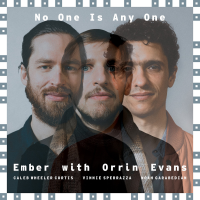 Ember with Orrin Evans: No One is Any One

To truly be in the headspace to appreciate the music of Ember, an understanding of the individuals making up the collective is paramount. The original compositions are not mind boggling, complex exercises brandishing the challenging dynamics of jazz composition in the 2020s. Refreshingly, the writing is open ended, containing melodies that come across as recitable mantras. ...

Another week devoted to new and upcoming releases with a special focus on the latest albums by Italian saxophonist Francesco Bearzatti and the members of his Tinissima 4et, trumpeter Giovanni Falzone, bassist Danilo Gallo and drummer Zeno De Rossi. To complete this all-European showcase, two quite different projects by British saxophonist Iain Ballamy, the resounding elegance ...

These days no one should be surprised at the quantity of highly talented women instrumentalists active in the current jazz and creative music scene. They come from all over the globe, and this episode casts the spotlight on some with current new releases: New York-based German saxophonist Charlotte Greve (The Choir Invisible), Belgian singer and keyboardist ...

The music on The Choir Invisible, presented by the musical equilateral triangle of saxophonist Charlotte Greve, drummer Vinnie Sperrazza and bassist Chris Tordini, presents the ear with a simple yet often intense beauty. Three strong sonic personalities exploring uncluttered territory. The trio, all of whom are busy members of the New York City jazz scene, formed ...

Second part of this week's exploration of new and upcoming releases [for the first part ]. Here we focus on the new works of drummers Chad Taylor, with his trio and in the duo with James Brandon Lewis and Matt Wilson, the global jazz of the cult band Aka Moon and South African pianist Nduduzo Makhathini... ...