By Patricia Myers
August 14, 2013
Sign in to view read count 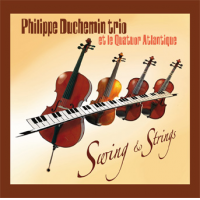 French pianist Philippe Duchemin's entry into the jazz-with-strings repertoire merges his classical roots with a love of modern jazz, blues and soul. His dual talents of composing and playing make this a strongly swinging album, with the string quartet adding a lovely luster.

Duchemin's crisp keyboard progressions contrast with the soaring and sizzling strings of the Atlantic String Quartet (Le Quatuor Atlantique, musicians from the Monte Carlo Orchestra). His longtime colleagues, twin brothers Christophe Le Van on bass and Philippe Le Van on drums, are fully integrated into the mix, making this a most delectable French treat.

The jazz charts include "It's All Right with Me," "Caravan" and "Who Can I Turn To?" plus a fresh rendition of Oscar Peterson's "L'Impossible." But the classical selections swing just as much, including Tchaikovsky's "Barcarolle Juin," Duchemin's contrapuntal "Take Bach" and a stunning interpretation of Michel Petrucciani's "Cantabile," a longtime European jazz favorite.

The sound is celebratory and vivacious, witty and powerful. The pianist-leader's agility and invention deliver the joyous swing of Peterson, his main influence, but distinctly memorable elements are solely his own. The 10 tracks reflect Duchemin's six years of classical training and then his shift at age 15 to studying the styles of his jazz piano idols Fats Waller, Erroll Garner and Peterson.

Through the decades, some critics and fans have maligned the strings-with-jazz sound, a concept dating back to the 1950s with albums by Charlie Parker, Clifford Brown, Ben Webster and Phineas Newborn, Jr.. They were followed in the '60s by Stan Getz, Bill Evans, Paul Desmond, Stan Kenton and Wes Montgomery. More recently, trumpeter Tom Harrell and guitarist Russell Malone have issued CDs with strings. This album, like its predecessors, is beautifully played music, not sentimental schmaltz or Muzak mush.

Duchemin is a regular at European jazz festivals and clubs, and performed in 2008 in Washington, D.C. The trio won the 2011 International Montauban Jazz Band Competition in France, the year the trio released Massilia (Black and Blue).

It’s All Right with Me; Barcarolle Juin; Take Bach; Que Reste T’il de Nos Amours; Cantabile; Caravan; Who Can I Turn To; There Is No Greater Love; Ballade en Pologne; L’Impossible.