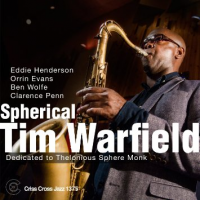 Thelonious Monk tribute albums are certainly nothing new in the jazz world. As early as 1961, Eddie "Lockjaw" Davis and Johnny Griffin recorded Lookin' at Monk and pianist Bud Powell recorded Portrait of Thelonious. Even while his career was still going strong, Monk's importance as a composer and influence on other jazz musicians was already clear. Today Monk's legendary status as one of jazz's most important figures is still clear. As far as I know, there is no hard data to back up the fact, but few jazz artists would argue with the claim that Monk is probably the most-covered jazz composer of all time.

On this most recent outing, Spherical, saxophonist Tim Warfield tackles music written and inspired by Monk. With seven previous releases on the Criss Cross label and multiple appearances as a sideman, Warfield returns to the label with a cast of familiar names for his dedication to Thelonious Sphere Monk. Joining Warfield on this album is trumpet legend Eddie Henderson, making his first re-appearance on the label since 1998. Ben Wolfe and Clarence Penn take the bass and drums chairs, respectively. The choice of pianist is obviously an important one on any work dedicated to Monk, and Warfield could not have filled the position with a better choice than Orrin Evans. Without ever sounding like he is trying to directly emulate Monk, Evans channels the spirit and humor of his idiosyncratic playing.

The album opens with Monk's slow swing blues "Bluehawk." Evans begins the soloing with a succinct but characteristic solo that centers around intervallic leaps and disjointed, crooked melodies. Warfield follows for an equally entertaining solo, creating an interesting sound between his full-bodied, Coltrane-esque tenor sound and his Monk-like stabs of melodic abstraction. Penn holds the band together, keeping constantly on top of Wolfe's rock-steady walking line while also keeping up a constant dialogue with the soloists.

The second track, "Oska T" is also a standout with the band hammering out Monk's simple, but memorable melody. Here Henderson takes the first solo and shines brilliantly with plenty of playful interplay with Evans. The band presents two takes of Monk's classic "Off Minor" which move freely in very different directions after the forceful statement of the melody. The second take morphs into a feel that almost seems to channel the classic Coltrane quartet during Warfield's intense solo.

Warfield switches over to soprano for a delicate re-working of "Ugly Beauty" in which the band shows off its restraint and lyricism. Also on the delicate side of things, is the album closer, a faithful reading of "Round Midnight" that lets Warfield take the spotlight with his soulful, meaty tone and intimate vibrato.

Though the idea is nothing new, the approach and treatment of this Monk tribute album is exceptional. Warfield and co. make the classic tunes their own and draw inspiration and attitude from the mentality of Monk. They approach the music with a sense of adventure and playfulness that draws the listener in and holds his attention. Fans of Monk won't be disappointed, nor will fans of any of the members of this band.

Blue Hawk; Oska T; That Old Man; Gallop's Gallop; Off Minor I; Ugly Beauty; Coming on the Hudson; Off Minor II; 'Round Midnight