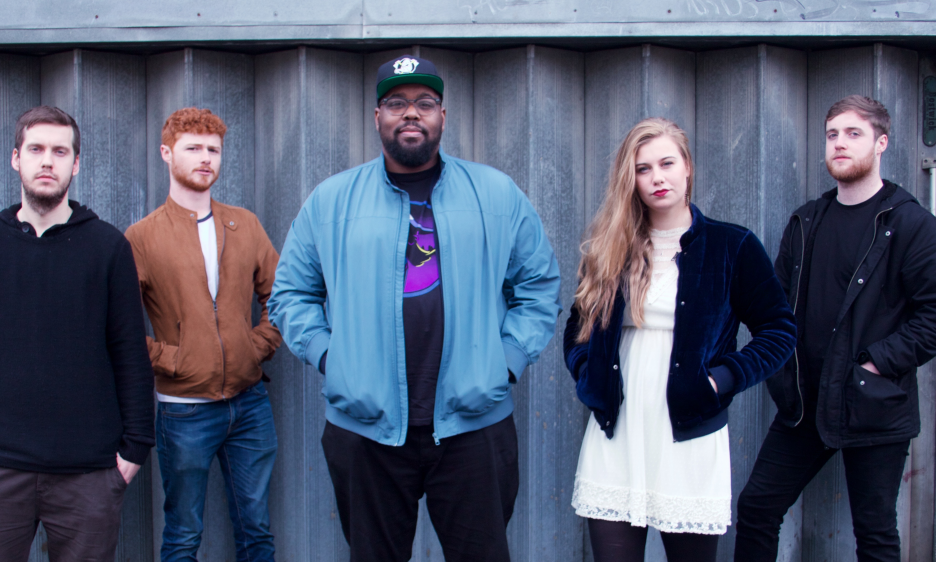 By JAMES FLEMING
January 25, 2019
Sign in to view read count

The bar is lit by dim neon bulbs. And the grey daylight streaming in from outside barely puts up a fight against their sickly colours. Shy Mascot sit at the back-four of their five members around two small tables tucked into a nook. The band's rapper, Jamel, is hunched over his knees on the left and beside him is drummer Andy O'Farrell. Vocalist Fiadh Rua Gregg sits in the centre with bassist Keith Tobin on the right. Keyboardist Éanna Ryder is absent. Wandering Galway's narrow streets perhaps. Enjoying the other musicians that they share Galway Jazz Festival 2018's bill with. A gig that brought them across Ireland from their home base of Dublin. And into this pub-venue. Where the air is packed with the disco blaring from hidden speakers and the floor is empty. Waiting on the nighttime crowd that will pile in to hear Shy Mascot's music.

Their sound is lean. A melding of rap and jazz that combines the murky, spare grooves of Wu-Tang Clan with the invention and harmony of fusion. Gregg's warm vocals dance around Jamel's raps, the pair bobbing and weaving over the rhythm section. Who syncopate the beat with the rhythmic creativity that is a trademark of both jazz and hip-hop. Two genres that are distinctly American. And that are twice as "by and for the people" as any congress could be.

They came out of the experiences of Black Americans. And it has been said that these musics belong to them. Jamel, however, believes music is universal. That it does not belong to any one people. But to anyone who treats it with due respect.

"I think music is something that should be enjoyed," he says. "Participated in by everyone." But there are many in his hometown of Miami, Florida, that disagree with him. "They kind of don't like when people who aren't black, who aren't American, kind of get into it," he says referring to hip-hop and RnB. "But for me, it just depends on people's enjoyment and appreciation of the style of music.

"Like if those people enjoy the music, and they have a love for the music, and they appreciate the history of the music, and stuff like that, I don't see why they shouldn't be able to come play the music." His bandmates are schooled jazz musicians. They came together in Dublin's Newpark Music Centre, where they studied the art. But Gregg says, despite that study, "we can only see it from our point of view. As Irish people we're still looking in on it," even though they have worked for proficiency in the genre.

Jamel maintains that "If people here are into that music, and they're making that music, and they're coming from an authentic place, it's fine." A genre does not define the musician. Rather, the musician works the genre. They come at it from their own angle—"from your own lens, from your own experience,"—as Jamel puts it. And that individual approach is how he defines "authenticity."

He mentions rapper "Kojaque, from Dublin. He raps about just his experience of being a young, twenty-something-year-old, Irish, man. And he does it well.

"Like, his music is really authentic. He's not talking about stuff that, y'know, guys in the States or London or wherever are talking about. He's talking about his Irish experience. And that's what I think authenticity is. It's being real. Being true to yourself."

"I always admired that with Jamel," Gregg says. "We're exploring what our sound is gonna be, where we want to bring the music. And Jamel's always super at ease. Like just to say 'that's not me, I wouldn't do that.' And I think that that's been really important as well.

"Because for us, because we're a band, it's like... Well, it's not just you by yourself thinking 'that's not my voice.' We have to speak as one. That's been really exciting as well because we get to find what that voice is. It kind of, brings us to new places that we kinda, explore together." Ireland has been notoriously resistant to "new places." Catholicism and fear made the unfamiliar a taboo and the original a threat. Anything that moved against that rigid word and way was hidden at the back of closets. Pushed to the dark corners of the mind and hidden from sight. For fear of what the village would think.

But in 2015 the gay marriage referendum was passed, winning 62% of the public's vote. In 2018, the abortion referendum was passed and was signed into law on 20 December. And at long last, Ireland is starting to nurture its artists and creators. Festivals, record labels, magazines, and art galleries are leading our creatives out into the light. We are moving away from the church and what the neighbours think. And becoming more open to new ideas. Ideas like Shy Mascot.

O'Farrell stirs from his silence to say that, in Dublin, "there's a lot of venues and promoters who are kind of up for getting original music out there y'know?" Shy Mascot's growing following, their very existence, proves bassist Keith Tobin right when he says "More people are willing to accept risks from bands nowadays than they were before." Ireland is conquering its fear of the individual. As it moves into the 21st century, it is leaving behind the ball and chain of its past. When secret shames were hidden away out of a supposed "decency." That was no more than fear in a mask.

Often these "shames" were people: Single mothers and their babies were locked away in "homes," the gay community was ostracised. Ireland is now taking steps towards improvement. Towards becoming a new country that is unafraid of the different. Frank Zappa said "without deviation from the norm, progress is impossible." As cultures change so will their musics. And Shy Mascot are a band for the new world. Where the different is lauded instead of destroyed.