By BRUCE LINDSAY
September 8, 2011
Sign in to view read count 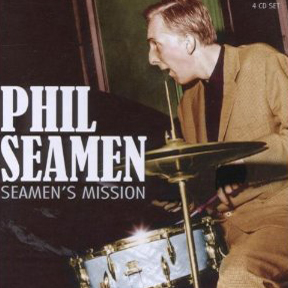 British jazz has produced many great players whose fame never came close to matching their talent. One such was the mercurial drummer Phil Seamen. Seamen's Mission a splendid 4-CD box set in the Proper Box series, is a great reminder of Seamen's skills across a range of ensembles from big bands to trios, from swing to bop.

Seamen began his professional career in 1944, working in the big bands of Nat Gonella and Joe Loss, among others. By 1949, he was playing bebop, while towards the end of his career he was briefly a member of Ginger Baker's Air Force. In the intervening years Seamen moved between phases of what seemed like incipient stardom and times when drug and alcohol problems threatened to end his career. At his best, he was the drummer on the UK scene: and the 56 tunes on this set are prime examples of Seamen at his best.

Seamen's Mission covers the period from October, 1952 to December, 1959, when Seamen was a member of some of the most popular British jazz groups, as well as some of the most innovative. Seamen led none of these combos: he seldom organized his own groups and recorded only one or two albums under his own name. But as a sideman, his playing on these recordings is always sympathetic and, at times, nothing short of spectacular.

For the most part, Seamen is in a supporting role, getting the occasional four-bar break on which to display his drumming. But there are occasions when he's given the time and space to demonstrate his abilities with rather more freedom. The 1954 recording of "Seamen's Mission," written by Victor Feldman as a showcase for the drummer, features Seamen with the Ronnie Scott Orchestra. The drummer is in top, hard-hitting form on a powerful extended solo that is stylistically closer to the big band era than to bebop, a reminder of Seamen's early professional career. But he could also bring some great ideas to more contemporary styles and smaller combos, as he shows to particularly good effect on two tunes from the Stan Tracey Trio, with Tracey on vibes, "Free" and "Boo Bah."

CD4 (Free), which features his work with groups led by Tracey, saxophonist Tubby Hayes and trumpeter Dizzy Reece, is the most consistently enjoyable disc. But it's the recordings with altoist Joe Harriott that showcase some of Seamen's best work. This is not his most creative, or explosive, or imaginative playing, but it does illustrate how sympathetic and supportive a sideman he could be—and also acts as a reminder of Harriott's own stylish work.

Seamen died in 1972, aged 46. He's remembered as much for his lifestyle and personality as he is for his playing, but Seamen's Mission is a terrific reminder that Seamen's talent as a drummer deserves to take center stage. This is a great value, well-packaged and informative box set, containing some of the best jazz from the British '50s and '60s scene.