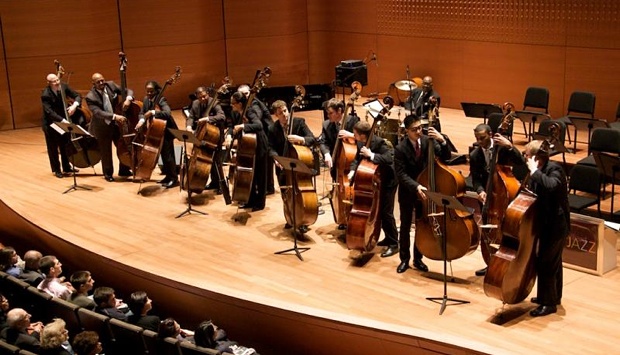 On the night of the Juilliard School's tribute to Ron Carter, electronic billboards lining 65th Street near Lincoln Center flashed bright pictures of the iconic jazz bassist. The event was a lot like the man and his music: there was an atmosphere of elegance and warmth, occasional touches of wry humor, some chamber music colorings mixed on a deep jazz palette, and masterful musical interplay throughout. The concert had been organized as a benefit to establish the Ron Carter Scholarship at Juilliard, where the bassist has been on the faculty since 2008, and featured a star-studded assemblage of Carter's colleagues and collaborators over the course of his career, along with top Juilliard students representing the future of jazz.

Kicking off the evening with the dramatic sight of 12 bassists walking in and lining up across the Alice Tully Hall stage, the group played "Mr. Bow-Tie," a light, bouncing Carter composition. Christian McBride led the ensemble on his arrangement of the tune, which included a round of four-bar improvisations by each member. Ben Williams and Ben Wolfe, who work alongside Carter on the Juilliard faculty, joined McBride in providing the main melody voice. Other notables in the group included longtime Carter collaborator Buster Williams and Juilliard student Clovis Nicolas, who was announced as the first recipient of the Ron Carter Scholarship later in the program.

Next up was another special treat: a variation on the Ron Carter Nonet, the group that features four cellos and a jazz rhythm section, which the bassist has presented on rare, treasured occasions since the late 1970s. In place of Carter's piccolo bass as the lead voice was flutist Hubert Laws, who has had a long association with the bassist, including several recordings together on the CTI label in the 1970s. Laws was joined by bassist Boots Maleson and drummer Lewis Nash, both of whom appeared on the Nonet's recording Eight Plus (Dreyfus, 2003). Rounding out the group were Samora Pinderhughes on piano and fellow Juilliard students on cello. The ensemble performed "A Song for You," the ballad by rocker Leon Russell, and the beautifully delicate Carter original "Little Waltz."

Actor Danny Glover, the M.C. for the event, announced that the next segment of the concert would feature Juilliard students in small ensembles and introduced the members of the first group. Glover coyly left out mention of the pianist in the band, Herbie Hancock, who entered the stage to a round of enthusiastic applause nonetheless. Hancock played in two different settings with Juilliard students, both quintets, performing compositions by Carter. The first was "Eighty- One," a tune recorded by the Miles Davis Quintet on E.S.P. (Columbia, 1965) during Carter and Hancock's tenure with the band. The second was "Third Plane," which Carter and Hancock recorded in a trio setting in 1977 with drummer Tony Williams, another Davis alumnus, on an album of the same title. The tunes were arranged by Juilliard students Joseph McDonough and Alphonse Horne, who also turned in outstanding solos on trombone and trumpet respectively.

Two more small groups featuring Juilliard students followed, each headed by tenor saxophonist Benny Golson, whose association with Carter dates back to the bassist's own student days. The two groupings also included bassist Buster Williams and drummer Carl Allen, artistic director of the Juilliard jazz program. They performed the Carter compositions "First Trip," inspired by the pioneering bebop-era bassist Oscar Pettiford, and "Blues for D.P.," written for pianist Duke Pearson, who played together with Carter on a number of his many Blue Note recordings in the 1960s. 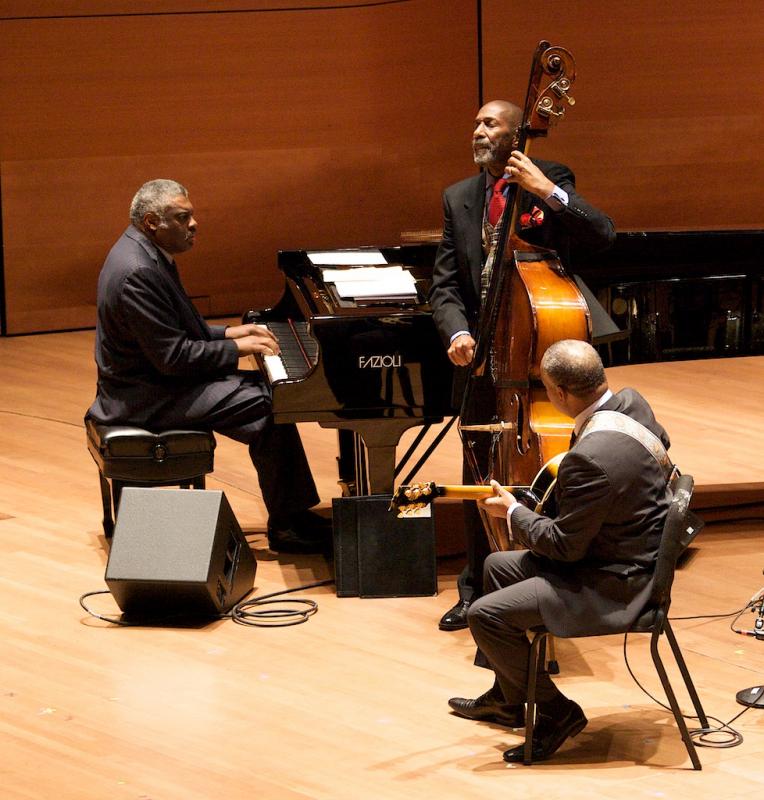 With all these inspired interpretations of Carter's music, the audience was primed for an appearance by the bassist himself. Joining him on stage was guitarist Jim Hall, and the two embarked on their patented telepathic interplay for two tunes from the extended repertoire they've developed in a duo setting over the years, "Alone Together," and "Baubles, Bangles, and Beads."

Carter remained in the spotlight for another coupling of songs, joined by pianist Mulgrew Miller and guitarist Russell Malone, who together make up The Golden Striker Trio, particularly notable among Carter's threesomes in recent years. Each of the musicians contributed deftly artistic solos on Fletcher Henderson's "Soft Winds" and Oscar Pettiford's waltz, "Laverne Walk," the latter tune featuring Carter's strong melody statement at the beginning and improvised out chorus, which concluded with a flourish of harmonics.

Carter left the stage to make way for one more small group setting, again featuring Hubert Laws, Russell Malone, Herbie Hancock, and Buster Williams, among others, performing Carter's "R.J.," written for one of his two sons. The trumpet solo by Juilliard student Matt Jodrell, who arranged the tune, was a particular standout.

The final ensemble featured in the concert was another very special one: a 17-piece group playing selections from Ron Carter's Great Big Band (Sunnyside, 2011). It's surprising to consider that in the bassist's entire career, he had never led a big band until this recording, which features arrangements by the Grammy-winning Bob Freedman, a contributor to a number of other Carter recordings over the years. The band included two-thirds of the original rhythm section from the recording, pianist Mulgrew and drummer Lewis Nash, with Buster Williams filling Carter's role on bass, and they were joined by other all-stars and Juilliard students featured in the concert. They played Freedman's "Pork Chop" and the John Lewis composition "Golden Striker," with Hubert Laws contributing an especially striking piccolo solo on the latter tune. 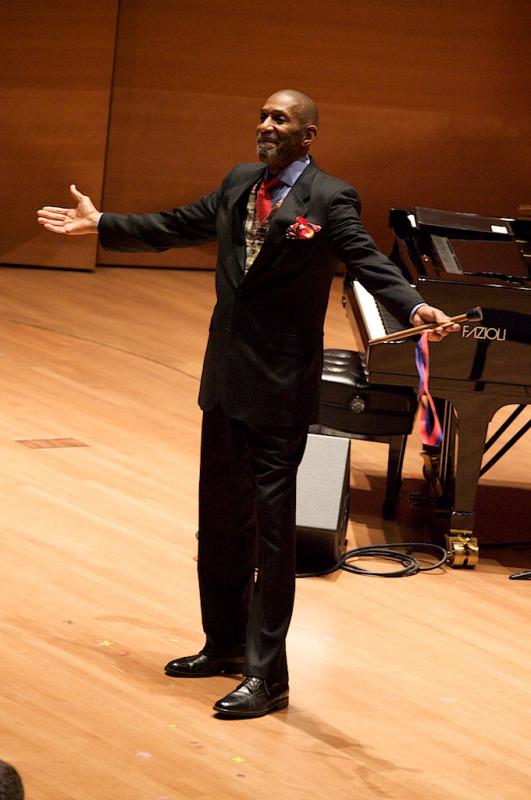 Following the big band, Juilliard President Joseph W. Polisi took the podium to recount some of the highlights of Carter's career, starting off by citing a quote from Stanley Clarke: "Even if a kid playing bass today hasn't heard of Ron, he'll be playing Ron—that's the extent of his influence." Polisi noted Carter's prolific output—some 2,000 recordings—and collaborations with Miles Davis, Herbie Hancock, Wayne Shorter, Freddie Hubbard, Horace Silver, and Sonny Rollins. He cited some of the awards Carter has garnered, such as the being named Distinguished Professor Emeritus of City College, where he served on the faculty for 18 years, and being named Commander of the Order of Arts and Letters by the French Ministry of Culture. To these, Polisi had one more to add: the Juilliard President's Medal, which he presented to Carter as a surprise.

The concert concluded with a tour-de-force solo performance by Carter playing "You Are My Sunshine," where the bassist beautifully showcased his singular jazz voice. He filled the hall with his clear and focused sound, simply stating the melody to start and then reassembling it in a range of elaborate variations, full of double stops, slides, glissandi, and many subtleties in intonation, plucking, strumming, and hammering down on his strings. The audience rose in ovation at the conclusion, and in a gesture that seemed somehow grandly humble, Carter stretched out his arms as he stood alone on the stage.