A tentet is a rather strange bird; too large to be labeled a small group, yet too small to be counted as a big band, it resides somewhere near the edges, mapping out its own musical profile. Some may rate that an asset, while others may deem it a mere hybrid, unworthy of their consideration. Wiser ...

Some vocalists excel at lyric interpretation. They know how to tell the story of a song with subtlety and nuance. Other singers have such beautiful voices that they’d be a pleasure to listen to if they sang the periodic table set to a Brahms lullaby. It’s not easy to say which is Shirley Crabbe's strength, since ... 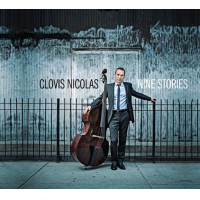 Label: Sunnyside Records
Released: 2014
Track listing: Pisces; None Shall Wander; Juggling; Mothers and Fathers; Thon's Tea; The Bridge; Tom's Number; You and the Night and the Music; Sweet Lorraine.

Ron Carter's judgment regarding the talent of a fellow double bassist can't be wrong. The acclaimed musician, who has recorded more than 2,500 albums and was a fundamental member of the Miles Davis Quintet, highly praises the sound and compositions of Clovis Nicolas. Carter wrote the liner notes to Nicolas' Nine Stories, the first ...

Meet Clovis Nicolas:After having established himself as a first-call bassist on the European scene (performances with Dee Dee Bridgewater, Brad Mehldau, Michel Legrand and others), jazz bassist Clovis Nicolas moved to New York in 2002. Since then, he has shared the stage in numerous venues (Jazz Standard, Smalls Jazz Club, Blue Note, 55 Bar, ...

Ron Carter at 75: A Life in MusicAlice Tully HallNew York, NYMarch 27, 2012On the night of the Juilliard School's tribute to Ron Carter, electronic billboards lining 65th Street near Lincoln Center flashed bright pictures of the iconic jazz bassist. The event was a lot like the man and his music: ...