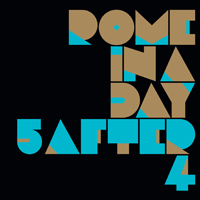 Rome In A Day is the sixth recording by 5 After 4. Led by drummer/composer Vito Rezza, the Canadian jazz-fusion quartet has an appealingly varied approach. Despite some 21st Century touches, such as Rezza's playful rhythmic displacements during its theme, "10,000 Days" has a down-home funky soul sound that recalls the Crusaders circa Chain Reaction (MCA, 1975). A lot of fusion bands would simply settle in with this sort of sound over the duration of the CD, and that would be fine.

Instead, 5 After 4 shifts gears and comes up with a Hammond B-3 fueled prog-rock sound on "Balena," sporting something of a Bill Bruford flavor. "Top Hat" is a complete surprise, its stop/start theme featuring a phalanx of overdubbed saxophones, with a popping, metallic Rhodes darting in and out of Rezza's thunderous drums. They follow this with "Lee's Mystery," a mellow ballad with a pensive edge—reedman Johnny Johnson carries this one with his Turrentine-esque tenor. The title track returns to a sort of highbrow jazz-funk, with Matt Horner's appealing Rhodes piano front and center. The way this tune plays out is really quite interesting—the theme is actually quite lengthy, with little spaces for brief solos. When the piece finally opens up into a jam, everyone trades phrases and shifts in and out of the foreground— much like Weather Report used to do. Johnson finally seizes the spotlight as a new rhythmic motif is introduced.

5 After 4 keeps changing up the groove in an appealing way throughout this fine CD, occasionally straying a bit too close to smooth jazz territory on "Mr. Govindas" and "A Changing of Seasons," but otherwise producing some truly imaginative, original fusion. The CD's high point, however, is the group-composed closer, "Animal Crackers." Ostensibly a collective jam, it sounds both spontaneous and tight, starting with Johnson's impressively big-toned soprano sax playing a vaguely Middle Eastern sounding improvisation over Horner's spooky Rhodes. Cardinali and Rezza ease in, playing very sparsely at first and building to a simmering rumble, as Horner and Johnson engage each other more directly. As Rezza and Cardinale continue to build, Horner adds some wah-wah, and the music begins to unfold into a minor-keyed funk direction that sounds a bit like something trumpeter Erik Truffaz would do.

Though not familiar to most US audiences, the four players in 5 After 4 are well-established and highly respected on the Canadian jazz scene. Bassist Peter Cardinale, who also produced the CD, has worked with Oscar Peterson, Ray Charles, the Brecker Brothers, and Michael Buble. Rezza has recorded with Joey DeFrancesco, Michael Brecker, and Richard Bona, in addition to playing with Big Mama Thornton and John Lee Hooker. Saxophonist Johnny Johnson has accompanied the likes of Aretha Franklin, Diana Krall, and Roberta Flack.

Capturing the group at the height of its powers, and in a dynamic setting, Rome In A Day is a memorable and soulful jazz fusion recording.