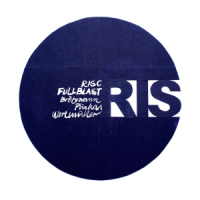 The Full Blast trio of saxophonist Peter Brötzmann, Marino Pliakas, and Michael Wertmüller get an injection of fervency with the electronics of Gerd Rische. As if they needed any more ferocity. Risc is the fifth official release by the trio, and follows the ambitious Sketches And Ballads (Trost, 2011).

Like Brötzmann's Last Exit recordings of the 1980s, Full Blast is a return to an electric interface between the great man and his cohorts. Here, the electric bass of Marino Pliakas fills the roles of both Bill Laswell and Sonny Sharrock and Michael Wertmüller's powerful drums do remind one of the late Ronald Shannon Jackson. But that was another century and Full Blast is its own band.

The inclusion here of live and post-production electronics finds Risc in similar orbits as Ken Vandermark's Made To Break with Christof Kurzmann. Where Made To Break pursues compositional structures mixing free improvisation with groove-based music, Full Blast stays loyal to the primeval push of free jazz. It's in his genes, Brotzmann was a DIY punk before there was punk rock.

Brotzmann exercises a favorite blues riff on "Schwarzspanier Street" with an opening solo that draws Pliakas and Wertmüller into a contemplative wandering before slowly turning up the intensity. "TTD" opens with Timothy Leary reciting his infamous "turn-on tune-in and drop out" quote. The agitation of the electronics and thunderous drums never deters the saxophonist. But what could. He has lived through World War II, the death of jazz, the end of the cold war, and the collapse of nations. He simply perseveres.