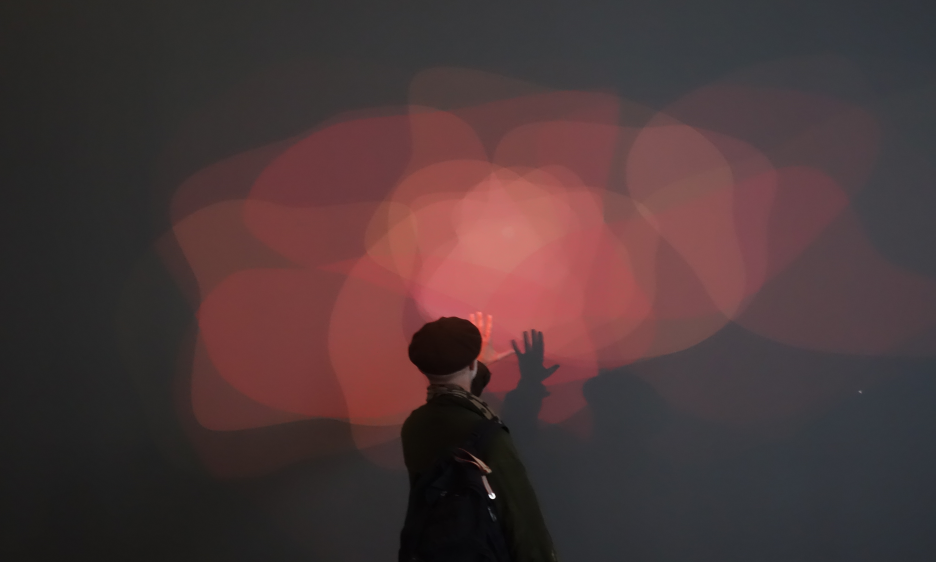 Punkt, with its 15th anniversary, is a quite young member among this year's prominent jubilees. It is still in the thrilling and promising future that has taken its course from 2005 on. Punkt then brought studio-technology to the stage, thereby establishing an extended form of improvisation, the live-remix of a concert as a whole, on the crossroads of other musicians' listening, their memory and recorded traces of that very music. After 15 years it has become a striking practice of an open form that has developed via felicitous moments of transformation, stunning highlights as well as productive failures.

The Punkt Projections at Sørlandet Art Museum with graphic work of Nina Birkelan and photography of Alf Solbakken floating on a mixtape of Punkt musical performances through the years compiled by Punkt-originators Jan Bang and Erik Honore offered a memory space to walk around and meditate sitting while the crossfading pictures triggered the spectator's own memory traces and associations. A strikingly clear and evocative iconography as a representation of and guide into Punkt's very own concept and aesthetics was presented there in a fabulous frugal way.

As a 2018-addendum and short exercise in recollection, a snapshot of last year's coherent opening night of Punkt with exclusively younger-generation-musicians is here called to mind. The five performances in the bare geometrical ambience of Kristiansand Kunsthall were revealed as a strikingly coherent, concentrated and exemplary sequence showing the range, variability and the possibilities of contemporary electro-acoustic music created by a new young generation. As such it served as an ideal and well-chosen basic stepping-stone into the wider landscape of live-remix work during the next two days.

Starting out with the hyper precision of Agnes Hvizdalek's vocal work on the sub-atomic level employing the entirety of the human vocalization apparatus the subsequent Skrap duo of Anna Lauvdal and Heida Mobeck went into an extreme opposite field with their rampant tumbling and sprawling conglomerations of utterly diverse snippets and threads of all kinds of collected music, sprouting in a glistering volcanic seething. The duo Glimt of Ingvild Sandstad and Ieva Praneviciute then brought another kind of precision in its subtle crossfading of acoustic and electronic sound. The Greek duo of Giorgos Varoutas and Anna Linardou took up the vocal thread of the beginning in a quite different way. From abstract vocalizations intertwined with masterful sophisticated electronics the music gradually grew into veiled and slightly distorted fragments of Greek and other Mediterranean folk songs. The force of these songs strongly permeated the electronic vapor time and time again and lent them a special touching emanation. In his performance at the end of the evening Matthew Collings broke it open again. His way of varying and expanding a strong basic pattern unleashed a layered dust-cloud of sound. With its special tension of stasis and turbulence, it manifested as a strong counterpart to Hvizdalek's initial solo-performance.

(1) from microtonal materiality into song-lines emerging from electronics noir
(2) angelic contrasts and sounding fringes
(3) from discoing out to rocking hailstorm, moving and uplifting the mountains
(4) all these combing, strumming, unraveling creative deeds

The performances took place at four locations in town: at Sørlandet Art Museum, at the Cathedral, at Club Kick Scene and at Kilden Music Hall.

Sequence 1: from microtonal materiality into songlines emerging from electronics noir

The sequence of the opening comprised Trio Azkadenya, Ensemble Modern + Jan Bang and brand-new quartet Dark Star Safari as a premiere. Azkadenya, a double bass-violin-vocal configuration of Inga Margrete Aas, Vilde Sandve Alnæs and Sidsel Endresen, was born in 2015 when former students Aas and Alnæs joined forces with their former teacher Sidsel Endresen. Its music breathed the materiality of the wooden string instruments and the core of vocality, that was intertwining in the abstract concreteness of the trio's music. About Sidsel Endresen's vocal art I gave a description on the occasion of her performance at Punkt Festival 2015:

"Generically speaking she is not just producing plosives and stuttering guttural sounds, playing around, nor is she imitating instruments. Her expression moves with basic vocalizations combined in a non-arbitrary way, to syllables freed of conventional meaning placed and articulated with great urge, driven by a deep musical intuition. She digs deep into the essence of the human voice and creates a strong visceral coherence. Melody is always in the air (or triggered vaguely in listeners' minds), sometimes touched upon or even fully articulated. She is one of the most extraordinary post-bop vocalists and the source for younger Norwegian jazz and improv singers."

Sandwiched between Azkadenya and Dark Star Safari a configuration of musicians from Germany's prestigious Ensemble Modern—Dietmar Wiesner (fl), Saar Berger (horn), Sava Stoianov (tp), Giorgos Panagiotidis (vln), Eva Böcker (vlc)—together with Jan Bang made its first astounding appearance in Norway. The group unfolded a highly sophisticated, fully improvised set. Was there a difference with so called free improvisers? Yes and no. The musicians of Ensemble Modern apparently can tap from other, quite sophisticated (re)sources that they implemented elegantly in their fluent collective improvisation. In this improvisational context they also played on greater distance (and maybe more deliberately) than hardcore improvisers. Another Norwegian premiere was the music of a new group Dark Star Safari, initiated around a year ago by drummer Samuel Rohrer comprising Jan Bang, Eivind Aarset, Erik Honore, which recently released its eponymous debut album on Rohrer's exquisite label Arjunamusic Records. The music has been emerging from an unusual process of inspecting, exploring and rebuilding free improvised instrumental material recorded at Berlin's renowned Candy Bomber studio by Tonmeister Ingo Krauss. In a creative chain reaction that very process then triggered Jan Bang, to his own and -at the Punkt night -also Kristiansand's audience's surprise, to resume his former musical practice as a vocalist. It became a new form of rebuilding, a not preplanned way of shaping songs from free improvised instrumental material. Now at its tertiary stage, the transition to straight performance of the songs live, a circle is closing. It was exciting to learn how it would unfold and evolve: the music manifested as a fascinating subtle passage noir into a new territory of song with a deep, wide and appealing performance of the group's "Child of Folly" as an outstanding and memorable example of this new thing. It happened to great acclaim of the audience and opened up a new chapter. This new semblance came into being particularly through the great shadings and coloring Eivind Aarset infused, and through Samuel Rohrer's sensitive and passionate drumming.

The second sequence brought us to Kristiansand's Cathedral just a few footsteps from Sørlandet Art Museum where Norway's eminent keyboardist Ståle Storløkken opened with a strong, competent and coherent solo recital on church organ. His exposition of different layers, interweaving and orchestrating them and letting them grow into a graceful sonority imbuing the church's space was masterfully enticing. It served as an upbeat to a new work, "Folklore" for the nine female Trondheim Voices, a piece composed by Ståle Storløkken and his fellow musician from Supersilent, Helge Sten aka Deathprod. Remarkably the third member of Supersilent, trumpeter/vocalist Arve Henriksen, sat in the live remix crew for this performance. The high standard of the carefully and elegantly choreographed, costumed and illuminated performance of the Trondheim Voices was—as always an immediate eye-and ear- catcher. The coalescing high-pitched voices lifted up into solemn space in a kind of modular, almost one-hour long opus in changing shapes of microtonal movements, at certain moments supported by light percussion flurries and highlighted by a staggering solo of singer Natali Abrahamsen Garner. The piece was based both on dazzling vocal skills and electronic amplification of the voices. A key factor also was the high-quality ensemble work which became apparent in the quick and apt way the ensemble compensated for the temporary outage of a singer during the performance. The openings, variations, transitions and transformations the ensemble can create are amazing, but the revolving creative urge also tends towards oversaturation and loss of the emotional narrative line. Through its cumulative length it couldn't keep the tension and hold the attention—a fly in the ointment. After that excursion extraordinaire it was not easy to take root in the sonic space of the cathedral and the listening minds of the audience. Guitarist Steve Tibbetts and percussionist Mark W Anderson entered on soft feet as a rippling fringe, indiscernibly gaining attention for their iridescent realm of arabesques. At that moment the urge of physical hunger to be satisfied became too strong to stay in that sonic realm. A heavy night program at Kick Scene club urgently needed a solid nutrition base! Later it became clear that the live-remix crew at the church comprising Eivind Aarset, Jan Bang, Arve Henriksen and Erik Honoré created a three-step live-remix response to the preceding performances of Ståle Storløkken, Trondheim Voices and Tibbets/Anderson, which according to witnesses became a masterful touching piece of music. Happily, during my writing I had the opportunity to listen to it at the BBC where it was part of Fiona Talkington's historical last episode of BBC's Late Junction program after 20 years. It indeed turned out as an endearing affair where all virtues of the punktish live remix blossomed, were shining brightly and deeply touching.

For me it remains wondrous how these musicians alertly and smoothly let arise a vaporous flow of music from their immediate choice and sonic manipulation of particles from just-heard music (Storløkken, Trondheim Voices, Tibbets/Anderson) in mutual exchange and division of labor. Every part of the just indicated process is a highly sophisticated thing not to mention the creation of such a rich and spraying flow of narrative significance. They enmesh fragments of the received music in a deep space, the twilight of a huge cave with lots of mysterious openings from which circulating melodic swathes ascend, levitating. Thereby they create an open, inviting form of improvised music that trustingly 'plays itself' at a high degree. There are a lot of possible fits in this kind of flow. It's a question of finding the most promising and surprising ones, arriving at the best fits in the immediate interaction of the live-remix crew. Despite lots of knowledge and routine this remains a highly intuitive process. When watching and listening to it, you can from time to time discern flurries of the original performance in surrealistic disguised forms such as a strangely muted sound of the percussive hang-bowls on the background. Happily, the speed and seductive force of the flow is such that it is mainly absorbed subconsciously by the listener. This may also trigger images of musical bats, moles, insects and birds causing vibrations and phantasmagoric figments—the bestiary of live-remixing.