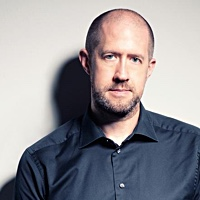 Ed Partyka is a bass trombonist/tubist, composer/arranger and conductor. Originally from Chicago Illinois, he received a BA degree from Northern Illinois University before moving to Germany in 1990. He completed a master’s degree in jazz trombone performance at the Conservatory of Music in Cologne, where he was also a member of the G.E.M.A. Jazz Composers Workshop, led by Bob Brookmeyer. He was recipient of the 2000 “A.S.C.A.P. / I.A.J.E. Commission Honouring the Centenary of Louis Armstrong”. He was 1st prize-winner of the 1998 “NDR Musikpreis” (Hamburg), 1st prize winner of the Jazz Composers Alliance 1998 Julius Hemphill Composition Awards (Boston) and finalist in the 1996 HR Emerging Composers Competition (Frankfurt).

As a recording musician Ed Partyka can be heard on over 60 albums, including 11 released under his own name. Most notable of these are the recordings of his Ed Partyka Jazz Orchestra, the Vienna Art Orchestra, WDR Big Band and Bob Brookmeyer’s New Art Orchestra.

Also very active in jazz education, he has presented workshops and masterclasses at universities and conservatories throughout Europe and has held teaching positions at the Johannes Gutenberg University in Germany, the Conservatory of Music in Vienna and was “Visiting Professor of Jazz Composition” at the Academy of Music in Katowice, Poland from 2008 – 2010.

Ed Partyka is currently Professor of Jazz Theory & Composition at the University of Music and Performing Arts (KUG) in Graz, Austria, where he was also Chairman of the Jazz Department from 2007-2020. He also teaches composition at the University of Applied Sciences and Arts (HSLU) in Lucerne, Switzerland. In addition to his career in Europe, Mr. Partyka has built a strong connection to the Australian jazz scene over the last 20 years with teaching engagements at Monash University in Melbourne and the Sydney Conservatorium of Music. He was “Artist in Residence” at the West Australian Academy of the Performing Arts (WAAPA) in 2006 and appeared as a guest artist/educator with the West Australian Youth Jazz Orchestra (WAYJO) in 2005, 2012, 2015 & 2017.

Ed Partyka is a board member of the International Association of Schools of Jazz. Show less

All About Jazz musician pages are maintained by musicians, publicists and trusted members like you. Interested? Tell us why you would like to improve the Edward Partyka musician page.