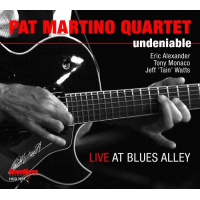 It is not a style Martino was born into. Brought up in Philadelphia, he was a child prodigy whose father would take him down the local barbershop to entertain the customers with note-perfect renditions of such finger-twisting performances as guitarist Johnny Smith's recording of "Moonlight In Vermont," made with tenor saxophonist Stan Getz in 1952. Smith, Martino says, "seemed to me, as a child, to understand everything about music," and his chordal dexterity still resonates in Martino's playing.

But from the start, Martino's professional career took him away from Smith's lush, downtown music towards a blacker, uptown sound, sparked by his discovery of guitarist Wes Montgomery, another continuing influence. Martino's first road gig, circa 1961, was with organist Charles Earland, and was followed by a stint with bar-walking tenor saxophonist Willis "Gator" Jackson. In order to immerse himself in soul-jazz, Martino relocated to Harlem, New York City in the early 1960s. In the confrontational racial atmosphere of that era, this took guts and determination—qualities Martino displayed again two decades later, when brain surgery left him without most of his memory and he spent four years relearning the guitar from scratch.

Martino has lived a life, and his music—including his ongoing forays into soul-jazz—is the richer for it.

Undeniable is Martino's first album since 2006's Remembering: A Tribute To Wes Montgomery (Blue Note), made with piano, bass, drums and percussion. Montgomery's round tone and signature parallel octaves are constants in Martino's style and remain evident in the new album. His lightning-fast, perfectly executed, single-note runs are, however, pretty much his own.

Martino is a virtuoso player, but, thankfully, one who never allows technique to overwhelm feeling. In this, he is well matched by his colleagues on Undeniable. Alexander is a robust tenor saxophonist whose lusty solos inhabit the crossroads where jazz and rhythm and blues meet. Ditto Monaco, whose walking bass lines retain their precision even when his hands are at their busiest. Watts is a groove drummer par excellence.

Most of the tunes, all but one of them written by Martino, are blues, with the exception of the opening "Lean Years," which leans towards straight-ahead mid 1960s hard bop (its publisher is listed as Prestige, the label for which Martino recorded his debut album, El Hombre in 1967, suggesting it may have been written in the late 1960s). A tender rumination on Thelonious Monk's "'Round Midnight" also steps outside the paradigm. The jaunty "Side Effect," which closes the album, is the most Montgomery-esque tune, a number that might have stepped right off Montgomery's Incredible Jazz Guitar (Riverside, 1960) or Full House (Riverside, 1962).

Undeniable was recorded over the Martino quartet's three nights at the Blues Alley, and it beggars belief that there was not enough material of the same caliber to fill out a double album. The seven tracks here are, presumably, the best of the best. Nobody, today, does soul-jazz better.

Tracks: Lean Years; Inside Out; Goin' To A Meeting; Double Play; Midnight Special; 'Round Midnight; Side Effect.

Lean Years; Inside Out; Goin’ to a Meeting; Double Play; Midnight Special; ‘Round Midnight; Side Effect.