Charles Earland came into his own at the tail end of the great 1960s wave of soul-jazz organists, gaining a large following and much airplay with a series of albums for the the Prestige label. While heavily indebted to Jimmy Smith and Jimmy McGriff, Earland came armed with his own swinging, technically agile, light-textured sound on the keyboard and one of the best walking-bass pedal techniques in the business. Though not an innovative player in his field, Earland burned with the best of them when he was on. Earland actually started his musical experiences surreptitiously on his father's alto sax as a kid, and when he was in high school, he played baritone in a band that also featured fellow Philadelphians Pat Martino on guitar, Lew Tabackin on tenor, and yes, Frankie Avalon on trumpet. After playing in the Temple University band, he toured as a tenor player with McGriff for three years, became infatuated with McGriff's organ playing, and started learning the Hammond B-3 at intermission breaks. When McGriff let him go, Earland switched to the organ permanently, forming a trio with Martino and drummer Bobby Durham. He made his first recordings for Choice in 1966, then joined Lou Donaldson for two years (1968-69) and two albums before being signed as a solo artist to Prestige. Earland's first album for Prestige, 'Black Talk!', became a best-selling classic of the soul-jazz genre; a surprisingly effective cover of the Spiral Starecase's pop / rock hit 'More Today Than Yesterday' from that LP received saturation airplay on jazz radio in 1969. He recorded eight more albums for Prestige, one of which featured a young unknown Philadelphian named Grover Washington, Jr, then switched to Muse before landing contracts with Mercury and Columbia. By this time, the organ trio genre had gone into eclipse, and in the spirit of the times, Earland acquired some synthesizers and converted to pop/disco in collaboration with his wife, singer / songwriter Sheryl Kendrick. There followed a succession of successful jazz / soul / funk albums including 'Odyssey' in 1976, featuring 'Intergalactic Love Song', 'The Great Pyramid', featuring 'Driftin' and perhaps his best remembered album from this period 'Revelation', featuring the Randy Muller (Brass Construction) produced 'Let The Music Play'. He moved into the Eighties with 'Coming To You Live' featuring 'The Woman In You' and the title track. There were further CBS outings with 'Street Themes' and 'Earland's Jam'. In 1983 he released an odd twelve inch single entitled 'It's A Doggie Boogie, Baby', popular on the UK dancefloors. Sheryl Kendrick's death from sickle-cell anaemia in 1985 left Earland desolate, and he stopped playing for a while, but a gig at the Chickrick House on Chicago's South Side in the late '80's brought him out of his grief and back to the Hammond B-3. Two excellent albums in the old soul-jazz groove for Milestone followed, and the '90's found him returning to the Muse label. Earland died of heart failure on December 11th, 1999, the morning after playing a gig in Kansas City, he was 58.

Maybe you're cooking today for the holiday weekend. Or perhaps you're driving a long distance to attend a family gathering or visit the house of a friend. Or you may just be going for a long bike ride or working over the long weekend. How does three hours of uninterrupted Charles Earland sound to you? I ... 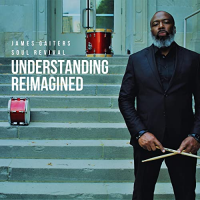 Anyone struck with a sense of deja vu by this recording, is not alone. Even without reference to John Patton's 1968 album Understanding , the feel of the late '60s and early '70s is overwhelming. Whether it is called Soul Jazz or funk, it has strong echoes of an era when the Hammond B-3 was king. ...

Joey DeFrancesco Quartet Live from Van Gelder Studio Englewood Cliffs, NJ May 15, 2021 Rudy Van Gelder (1924-2016) was a rarity among sound engineers in that his name was highlighted on many album covers and he achieved legendary status in the jazz world. He initially held recording ...

Many fans of organist Charles Earland favor his late 1960s and early '70s recordings, such as Black Talk!, Black Drops and Living Black! And rightfully so, since Earland's leadership albums from this period burnished his “Mighty Burner" moniker. But don't neglect his later period. Case in point, Front Burner. Recorded in June 1988 for Milestone and ...

Some African cultures preserved their history not by the written but by the spoken word, kept by oral cultural historians known as griots. On Was Out Jazz Zone Mad, vocalist Tony Adamo aspires to serve in this same role, as a verbal historian of both official and unofficial African-American jazz and blues culture. This type of ...

We celebrate the 50th anniversary of Blue Note sessions recorded in November, 1968 from Lou Donaldson (with Charles Earland, Blue Mitchell, Jimmy Ponder and Idris Muhammad), Bobby Hutcherson (with Stanley Cowell and Harold Land) and McCoy Tyner. Bien sur, there's more, including 78 rpm recordings of The Port Of Harlem Jazz Men from 1939--the ...