Alyssa Allgood: Out Of The Blue

By MARK SULLIVAN
October 15, 2016
Sign in to view read count 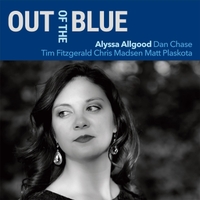 Chicago vocalist Alyssa Allgood devotes her first full length album to an unexpected source: the classic hard bop repertoire of Blue Note Records. The label is mainly known for instrumental jazz, and all of these selections were originally instrumental. This presents no problem for Allgood, who demonstrates equal facility scatting, singing wordless vocalise, and writing lyrics (which she does on four tracks). She has a crack band, too: organist Dan Chase, guitarist Tim Fitzgerald, saxophonist Chris Madsen and drummer Matt Plaskota provide all the swing and blues flavor the material calls for.

The program opens with an arrangement of saxophonist Hank Mobley's "Dig Dis" from the iconic album Soul Station (Blue Note, 1960) re-titled "Watch Me Walk Away" with Allgood's lyrics. The lyrics and bluesy bop lines recall Annie Ross, a great place to start. "Noticing the Moment (Moment's Notice)" ups the ante with John Coltrane's tune, a complex harmonic labyrinth which most instrumental soloists have difficulty negotiating. "It's Your Or No One" is a standard favored by Blue Note stalwart Dexter Gordon (as well as Art Blakey); there's no need to improve upon Sammy Cahn's lyric, but the singer adds scat and vocalese doubled by the guitar.

The remaining selections range widely through the Blue Note catalog. Some of them could be described as expected choices: Bobby Timmons' "Moanin'" (which already had lyrics, courtesy of the great Jon Hendricks); Horace Silver's "Peace;" and Lee Morgan's lovely bossa nova "Ceora" (this one also already had lyrics by Milton Suggs, with the title "Only a Memory"). Less expected tunes include Wayne Shorter's "Speak No Evil," Sam Rivers' "Beatrice," Joe Henderson's "If" (recorded on organist Larry Young's 1966 album Unity), and drummer Joe Chambers' "Mirrors," which was first recorded on trumpeter Freddie Hubbard's Breaking Point (Blue Note, 1964). The Larry Young session is the only one originally featuring the organ, so the organ group format (and Dan Chase's hand in some of the arrangements) is a major factor in the freshness of the sound.

In Allgood's brief career she has already won the coveted Downbeat Magazine Student Music Award for Best Collegiate Vocal Jazz Soloist in 2014, was named a 2016 Luminarts Jazz Fellow through the Luminarts Cultural Foundation in Chicago, won 2nd place in the 2016 Jazz Voice Competition held by the Mid-Atlantic Jazz Festival, and placed as a top ten semifinalist in the 2015 Shure Montreux Jazz Voice Competition. On the evidence of Out Of The Blue, expect to hear a lot more from her in the future.

Watch Me Walk Away (Dig Dis); Noticing The Moment (Moment's Notice); It's You Or No One; Speak No Evil; Beatrice; Peace; If; Only A Memory (Ceora); Moanin'; Mirrors.