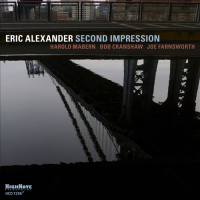 Not only has tenor saxophonist Eric Alexander recorded more than thirty-five albums as a leader since arriving in New York City some twenty years ago, he has appeared on almost as many others as a sideman. He's such an earnest blue-collar worker that one almost expects him to carry his saxophone in a lunch pail instead of the standard instrument case. Any Second Impression would mirror the first: Alexander is a tireless craftsman who loves to play and, more to the point, always shows up ready to play. Nothing seems to impede him, even the severe back pain he was suffering as this latest recording was being made.

As the premise behind Second Impression was bold spontaneity, Alexander gathered around him a trio of longtime friends and colleagues whose musical antennae reside on the same wavelength, thus assuring that whatever path he might choose would be firm and secure. Pianist Harold Mabern and drummer Joe Farnsworth have been mainstays on a number of Alexander's previous albums, while bassist Bob Cranshaw, the rhythm section's relative "newcomer" at age eighty-three, had worked alongside Mabern since their days in Chicago in the '50s and brought a wealth of experience to the task at hand. Needless to say, Alexander had no second thoughts about Cranshaw's inclusion on the team.

Once the group was intact and ready, tunes were chosen and arrangements worked out in the studio. Mabern suggested Jimmy Smith's juicy "T-Bone Steak" and Wes Montgomery's boppish "Full House" to complement three originals by Alexander, Sergio Mendez' seductive "So Many Stars" and the standards "Secret Love" and Matt Dennis / Tom Adair's ode to despair, "Everything Happens to Me" (to these ears, the session's apex). Farnsworth contributed the funky "Jennie's Dance," on which Mabern plays Fender Rhodes and Cranshaw electric bass, as they do on "Secret Love" and "Full House." Alexander wrote the title song, which raises the album's curtain, as well as the upbeat "Blues for Mo" and even snappier "Frenzy."

While Mabern, Cranshaw and Farnsworth play their roles with enthusiasm and assurance, and Mabern is an especially engaging and perceptive soloist, it's clear that they are essentially along for the ride, lending Alexander a broad canvas on which to paint his sharp and radiant sound-portraits. Alexander, for his part, is invariably eloquent and persuasive, reinforcing his stature as one of the jazz world's most astute and accomplished tenor saxophonists. And that's far more than a Second Impression.