BY DOUG COLLETTE
October 15, 2016
Sign in to view read count 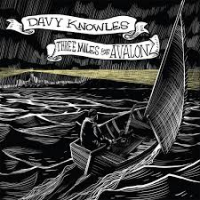 It's tempting to call Davy Knowles' Three Miles From Avalon a sequel to his first solo album The Outsider (Independent, 2014). But that misrepresents an artistic progression that goes back to the days this young native of the Isle of Man was fronting the blues-rock quartet Back Door Slam back in 2003. Fractured by the tragedy of one member's death, that group eventually gave birth to Knowles' decision to work solo under his own name with accompanying musicians, which is where we found the precious guitarist and songwriter on his previous release.

The insistent repetition of the bedrock riff of "Ain't Much of Nothin,'" combined with the prominence of organ in the arrangement, hearkens directly back to Knowles' previous album. But an immediate change of pace, to a more overtly auto-biographical mid-tempo tune in the form of "What You're Made Of," supports the precocious artist's decision to produce this album himself (in collaboration with Anthony Gravino who recorded and mixed) at studios in his adopted hometown of Chicago.

Alternating the bite of his electric guitar with the adorned with the soft sheen of female harmony background vocals is testament to his musical savvy and a knowledge of his roots: Knowles realizes full well the fundamental difference between live performance and studio recording. And while there is a scholarly aspect to the locale of these sessions-Chess Records, the literal home of electric blues in the American record business, was headquartered in this city-Davy sounds much too impassioned with his music to be classified as a mere academic.

Nonetheless, as he is often wont to do in concert, he includes a nod to his foundation in pure blues in the form of a cover of bassist Willie Dixon's "What In the World;" like most of the originals here, there's an ominous atmosphere to this slow blues and to an even greater degree, the chain-gang chant that is "Oxford MS; " that , shadowy air belies the generally upbeat demeanor of the artist himself and thereby broadens his artistic persona.

The artwork of Three Miles From Avalon, similar as it is to that of The Outsider, is another thread of continuity in Davy Knowles' work. And the very title of this album, its moody titletune and the presence of songs with an intrinsic recognition of the passage of time ("Never Gonna Be the Same"), suggest in no uncertain terms this precocious musician envisions his career from a long-term perspective.

Which is no doubt why he parses his solos, like the ones that pepper "Gov't Row,' with such well-formulated economy. As with such instrumental intervals and the unadorned but nevertheless clean production of this record overall, Davy Knowles takes his time to make his statements clear and to the point and this approximately forty-five minute album is a shining case in point.

Ain't Much Of Nothin'; What You're Made Of; Falling Apart; Never Gonna Be The Same; Government Row; Oxford, Mississippi; Three Miles From Avalon; What In The World.