Advertise
25
Catching Up With 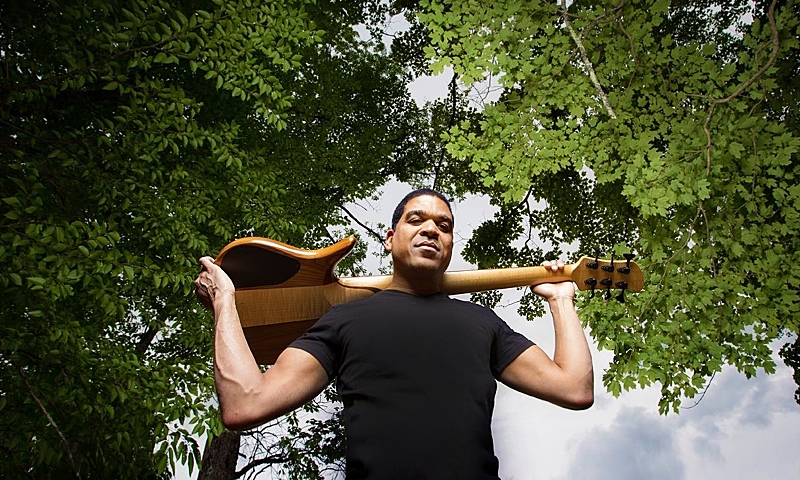 Jaco didn’t consider himself a jazz bassist, he was a punk jazzer. I think I’m a folk jazz player.
—Oteil Burbridge

Rarely does the opportunity to interview a touring musician arrive with much advance notice. Schedules tend to be dictated by airline departure times, hotel check-out policies and sound checks. If I am lucky, I'll know of an upcoming show in town a few weeks in advance and can plan accordingly. If the artist has a few minutes to chat post-gig, I usually attempt to prep them with a few questions and follow up via phone later. Sometimes however, an opportunity literally sits down in the back seat of your car and starts a conversation.

Like most generation x-ers, I grew up with a lionized version of the 70's and the music that grew out of the Vietnam war era. The myth that Jimi Hendrix and The Dead were household names in their respective heydays prevailed as we dug up our parents' old vinyl and declared that we had been born in the wrong decade. I received a copy of Allman Brothers Band' At Fillmore East when I was 17 and was surprised to learn that both Gregg Allman and Duane Allman had cut their teeth as session players before their big break. In the 00's, the band included bassist Oteil Burbridge, and guitarists Warren Haynes and Derek Trucks. This association led to Trucks' forming the Tedeschi Trucks Band with his wife Susan Tedeschi, and brothers Oteil and Kofi Burbridge. This past May, I was fortunate to connect with Oteil in between these projects the day after he performed with Oz Noy and Keith Carlock at Martyr's in Chicago.

A consummate artist in several styles of American Music, Oteil Burbridge is most famous for his fifteen year contribution with The Allman Brothers Band. A native of the D.C. area, Oteil and his brother Kofi relocated to Atlanta and have maintained a rigorous touring schedule for the past 10 years. This decision to move to the deep south had a significant impact on Oteil's musical perspective.

OB: It's probably why I'm so into folk music. I find it fascinating, cause it gives you the real story. The uncut...not the bullshit party-line story. It's the real story, it shows you somebody else's point of view and it can be enlightening. You can see where people are coming from, their motivation. I think that's why bluegrass kind of continues to capture my attention. Because, it's the music of poor people. Coal miners, and people who are getting shit on badly. They have it just as bad, in some cases worse, than people in the ghetto. We do this song called 'Coal Dust Revenge' about people having black lung, you know? Your job was gonna kill you, it was just a given."

While folk and bluegrass tend to dominate Appalachian music, the roots of southern music extend deep into the heart of America. From its conception in the delta to the migration north after the war, jazz has maintained a cultural significance through many iterations. As the music evolves, it tends to mirror popular trends while retaining a focus on improvisation. Styles such as "funk," "rock," and "gospel" are really just different branches of the family tree that grew out of the deep south.

OB: "No matter how far you dig down south, you never hit the bottom. Funk: Augusta Georgia, New Orleans. Right? And other places, but that's where that shit really starts. Blues, which gave birth to rock, and jazz. Again, New Orleans. I mean, how do you go any further back? Then you have country, bluegrass, and all kinds of gospel music. I mean Jesus, all that shit came out of there."

Often compared to Jaco Pastorius in his use of chords and harmonics in his solos, Oteil Burbridge has successfully synthesized elements of rock, folk, bluegrass, and gospel music into a highly personalized musical style. Whether seamlessly integrating scat solos ala Richard Bona, or fusing tight chops with Americana in the styles of Bela Fleck and Edgar Meyer, Oteil Burbridge has proven himself a musical chameleon of sorts. Nevertheless, his roots in folk and jazz music lend an artistic honesty that can be felt whenever he performs.

States Burbridge, "Jaco didn't consider himself a jazz bassist, he was a punk jazzer. I think I'm a folk jazz player."

Ben Scholz is a drummer/percussionist who lives and works in Chicago. He recently released his debut album "Shiny Metal Objects" with The Elec Tet