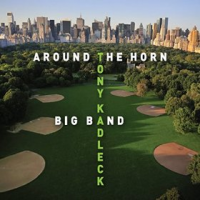 Trumpeter Tony Kadleck is one of those musicians that nearly everybody has heard, regardless of whether they know it. He's an unerring player with extraordinary chops, making him a first-call player for Broadway contractors, jazz musicians, and anybody looking for a never-miss trumpet player to add musicality to a studio session. His horn can be heard on the original cast recordings for shows like Beauty And The Beast (Disney, 1994) and The Producers (Sony Classical, 2001); he's been a mainstay on the big band scene, working with Maria Schneider, John Fedchock, John Hollenbeck, Bob Mintzer, and Jim McNeely, to name just a few; and he's shown up on recordings from a diverse assortment of high profile non-jazz acts like David Byrne, They Might Be Giants, Rosanne Cash, and Phillip Phillips. To say he knows his way around the horn would be a gross understatement.

Around The Horn is something of a double entendre, referencing both Kadleck's early-in-life love of baseball and his later-developed passion for trumpet in its name; the sport of music, however, is the only athletic pursuit that's showcased here. The man in charge gathered a team of his top-notch musician-friends, arranged ten tunes, and put the ball in play. The material is diverse, largely familiar, and wholly accessible. This isn't a throwback record, but it also can't be considered big band nouveau; it falls somewhere between those two poles. Kadleck's love for the contemporary shows up in his writing. He delves into the light-handed funk-meets-boogaloo of John Scofield ("Green Tea"), tackles the breathtaking work of the late Michael Brecker ("African Skies") with some help from guest trumpet soloist Randy Brecker, and delivers an awe-inspiring rewrite of "One Hand, One Heart," teasing other West Side Story themes, adding some oomph to the music, and painting with a great deal of harmonic color.

Elsewhere, Kadleck tips his cap to Cannonball Adderley with a somewhat Basie-esque look at "Wabash," references Stevie Wonder with a forgettable take on "Creepin'" and an unforgettable, metrically-revised arrangement of "Don't You Worry 'Bout A Thing," and adds a third dose of Motown via a pleasing take on Marvin Gaye's immortal "What's Going On. Kadleck wears his heart on his sleeve when he puts his flugelhorn front-and-center on "How Do You Keep The Music Playing?," and he delivers an appropriately light-textured take on Jobim with "Look To The Sky," but he doesn't let sedateness prevail; the aforementioned winning take on "Don't You Worry 'Bout A Thing" follows "How Do You Keep The Music Playing?," and what is, perhaps, the least sentimental version of "I'm Getting Sentimental Over You" in the world follows the Jobim tune, closing out the album.

Precision and passion have long been the hallmarks of Kadleck's work, and both come through loud and clear on this pleasing date.