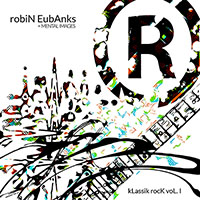 While jazz purists like to think that the artists they love have always been into jazz and nothing else, the truth is often more than a little different: not only have most jazz artists who grew up in the '60s and beyond been unalterably impacted by more than just the jazz music of their time, but they remain fans of music beyond the genre's broadest purview. Yes, there are purists, but most musicians—irrespective of the style of music upon which they focus as performers and writers—are not just jazz fans, they're music fans, plain and simple. So it's no particular surprise to find trombonist Robin Eubanks—longtime collaborator with bassist Dave Holland and the SFJAZZ Collective, amongst many other projects—writing, in his brief liner notes to kLassik rocK vol. 1, that this is a recording, "I've wanted to make for several years...it combines my musical roots with my musical present to create a direction I'd like to develop into the future."

That Eubanks' musical roots range from the soulful funk of Sly and the Family Stone to the psychedelic space-blues of guitar god Jimi Hendrix should be no surprise to any who've heard his experimentation with electric trombone, Eubanks clearly aiming to expand the possibilities of his instrument just as Hendrix did. Those familiar with Eubanks' Live Vol. 1 (RKM, 2007)—his EB3 trio creating sounds in performance that would seem unbelievable except that the included DVD made visible the trio's many uncanny achievements, including both Eubanks and drummer Kenwood Dennard playing their primary instruments and keyboards simultaneously—already know, from the heavily flanged, overdriven and delay-drenched trombone of "Blues for Jimi Hendrix," that Eubanks' roots extend far beyond even the furthest outer reaches of jazz. kLassik rocK vol. 1 simply renders the trombonist's roots even clearer, with a set that, in addition to five Eubanks originals, includes two Led Zeppelin tunes ("Kashmir" and "The Ocean"), one Sly and the Family Stone smash ("Thank You") and a Hendrix hit ("Fire").

Although the Mental Images group that performs this fiery 64-minute set of songs has released albums in the past, most recently more than a decade ago on Get to It (REM, 2001), it remains an ever-shifting group of collaborators, with Eubanks bringing back brothers Duane Eubanks (trumpet) and Kevin Eubanks (guitar) as guests on a couple tunes each, with the core group on all but three tracks consisting of keyboardist Mike King , fellow Holland collaborator/drummer Nate Smith and, perhaps the album's biggest surprise, bassist Boris Kozlov. Kozlov has emerged, over the past 15 years, as a fine acoustic bassist with artists including fellow Russian (and Holland alum) Alex Sipiagin, pianist Dave Kikoski and the Opus 5 collective, but none of these collaborations are preparation for the get-down electric bass playing he delivers on tracks like the 9/4 funk of "Thank You"; the trombonist's knotty "United Vision," where alongside guest (and yet another Holland alum) Billy Kilson Eubanks' Mutron-wah'd trombone is as dominant a voice as guest vocalist Kuumba Frank Lacy; and, in particular, Eubanks' irregularly metered instrumental "Between the Lines," which heads into serious M-Base territory and an impressive, heavily effected mid-section electric solo that's truly Kozlov's coming out party on the instrument.

Glover also sings on a polyrhythmic and percussion-heavy rework of Led Zeppelin's "The Ocean" that retains the thundering weight of the original while expanding it harmonically through King's piano work, opening up into one of Eubanks' most impressive electric trombone solos of the set. It also features, in a fading coda that's a feature for percussionist Daniel Sadownick, Glover drawing a clear line to Robert Plant as he makes a direct reference to the Zeppelin singer's closing line on "You Shook Me," from the group's eponymous 1969 Atlantic Records debut.

As much as kLassik rocK vol. 1 provides space for Eubanks to shed a light on the future of his instrument through a series of unfettered solos that are as psychedelically mind-bending as they are sophisticatedly virtuosic, its success is also predicated on the trombonist's writing and arrangement skills. Layered and looped instruments are a defining characteristic, as is the use of electronics to take a simple bridging section, like that between Eubanks' solo on "The Ocean" and Glover's final verse and chorus, and turn it into something bigger, as Eubanks broadens the simple horn line, supported only by Smith's hi-hat and Glover's stereo-panned voice, by harmonizing and filtering to create the impression of a spacey 'bone section.

But Eubanks doesn't just rely on electronics to demonstrate the inestimable virtuosity he's become known for through his largely acoustic work with Holland and SFJAZZ Collective the past several years (though, as he demonstrated during his 2011 SFJAZZ show in Ottawa, Canada, he's beginning to incorporate electronics into that band as well). His primary solo on "Between the Lines" is all-acoustic, the trombonist joining Kilson, after the drummer takes a set-defining solo over guest Kris Bowers's piano ostinato, for a trombone/drums duo that's about as incendiary as Eubanks has ever been.

Eubanks also finds a happy medium between electric and acoustic work on his instrumental look at Led Zeppelin's progressive-leaning "Kashmir," soloing acoustically over a bed of processed horns, percussion pads and King's surprisingly mainstream-centric piano support before switching to electric trombone for a searing solo pushed even harder by Smith's urban-oriented groove. But it's electric all the way on Hendrix's "Fire," the trombonist trading off with brother Kevin—overdriven to the extreme—before the two break off for individual solos that may possess the language of jazz but combined, as they are, with a hard-rocking rhythm section, point to the future Eubanks refers to in his liner notes; a future where boundaries no longer exist and it's not just possible, but allowable to incorporate all the things that lead to an artist being who he or she is.

Time and climate have, over the years, driven Eubanks to define himself as an acoustic player of considerable worth—and tracks like kLassik rocK's all-acoustic "Bahian Parade," also featuring percussionist David Silliman, make clear that Eubanks is far from looking to leave those years behind. But with the more eclectic and electrifying music that makes up most of kLassik rocK vol. 1, Eubanks is also making crystal clear that the broader background that's always been a part of him is now asserting itself in a way that, rather than neglecting the music that's come before, celebrates it by making it a part of a much greater whole. If we're still waiting for EB3's Live Vol. 2, Eubanks has, with the completely captivating and, hard to believe, even more thrilling kLassik rocK vol. 1, raised expectations for yet another second volume that will hopefully come sooner rather than later.