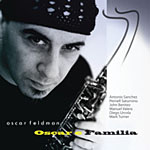 Oscar Feldman is ready, with Oscar e Familia, to put his own stamp on the alto saxophone. Not since the fire of Jackie McLean, the cool breeze of Lee Konitz, Eric Dolphy's rhythmic advances, Ornette Coleman's Harmolodic theories, and Steve Coleman's mBase concepts, has someone attempted to create a new language for that instrument. True, Charlie Parker presided over the advent of the most enduring revolution in music: bebop. Now, however, Feldman has, as an alto saxophonist, made a dramatic advance in the language and is enabling a new literature that will, in time, stand parallel with mBase and Harmolodic music. So, what has Feldman really done?

Firstly, he is steeped in the Afro-Caribbean tradition that is buzzing all over South America as it collides with the jazz idiom. Secondly, his grasp of classic and modern European music and dance traditions is complete. Finally, he is well-versed in the history of jazz and without being pedantic. He can swing and samba, meld Afro-Caribbean clave with 3/2 Cuban clave, gracefully sliding from one to the other, building a whole new library of music in the bargain. Then, there is the small matter of his voice: Feldman is a master of the intricacies of tone and color, and an array of inventive rhythmic patterns. He is also a fine writer. He writes for sound: as with tenor saxophonist Mark Turner dry, harmonically erudite runs on "So Tenderlee," a celebration of the towering contributions of Lee Konitz.

Feldman switches to a suave modal counterpoint as he preps Xavier Perez to play tenor across his own breathless alto in Hermeto Pascoal masterpiece, "Oscar e Familia," specially composed for this record. Feldman's broad, elegant vibrato recalls Sidney Bechet in the soprano introduction to the piece playing opposite bassist, Pablo Aslan, who makes his entry with con arco and sagacity.

Throughout the record, Oscar Feldman can be heard probing the wall of sound he aims to build with muscular authority, steeped in the adrenaline that floods his various emotions. He matches the elemental longing in "New Tango," playing ahead with great feeling, and like a whirlwind bow across the Cuartetango String Quartet, so masterfully arranged by Carlos Franzetti on "Coco da Bahia" and "New Tango." Feldman's "Coco da Bahia" is a beautiful samba written for his father, while "New Tango" is an exquisitely crafted standard that does the tango tradition proud.

Feldman is wildly intrepid in interpretation on Astor Piazzolla "Triunfal," while playing labyrinthine lines around percussionist Saturnino's cajon on Guillermo Klein "El Minotauro," in the style of a Peruvian lando. Feldman plays Wayne Shorter's "Children of the Night," with singularly individual authority, in another challenging rhythmic extravaganza. "Peace to Find" heralds a return to calmness, working in funky counterpoint to the beginning of the record.

It has been a decade since Feldman's first record. The result is a proverbially important document by a musician of considerable repute.