BY KARL ACKERMANN
December 8, 2019
Sign in to view read count 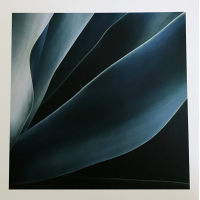 Diethelm teamed up Newvelle Records to capture six live 2018 performances at Muri. The exclusively-vinyl label has released the concerts in a six-LP box set called Newvelle Muri. The set is an eclectic mix of musical styles from well-known artists and rising stars. The talent spans generations with Charles Lloyd drummer Eric Harland, in a solo effort, and pianist Gadi Lehavi, who has been performing globally for more than a decade and hasn't yet reached his mid-twenties. In the assortment is also Australian Nadje Noordhuis (Darcy James Argue's Secret Society), an Australian trumpeter/composer on the verge of more serious solo recognition.

The sequence of the six albums is relevant only for non-musical reasons to be discussed later. Guitarist Gilad Hekselman's Eyes of the World features a bass-less trio with Aaron Parks on piano, Fender Rhodes and keyboards, and Kendrick Scott on drums. They perform under the name ZuperOctave. Hekselman is a regular performer at top New York clubs such as the Blue Note, The Jazz Standard, Dizzy's Club, and Smalls. He has shared stages with Chris Potter, Anat Cohen, Esperanza Spalding, Avishai Cohen, Becca Stevens, Terri Lyne Carrington, Danilo Pérez, and many others. Hekselman's style is smooth and bright and in the of company Parks' pure, elegiac tones and Scott's insistent drumming. Hekselman offers the listener a full range of moods. "Eyes of the World," "The Way There," and "Lullaby to Myself" have a leisurely— sometimes pensive—appeal. There is also the charming quirkiness of "Tokyo Cookie," a hesitant "Stumble," and the rattling pace of "VBlues." The interactions are compelling and the trio skillfully avoids typical fusion formulas.

The unusual make-up of the Nadje Noordhuis Quintet plays no small part in its broad appeal. Though Noordhuis is not yet a household name, her credentials speak volumes. The brass artist has been part of projects with the above-mentioned Secret Society, the Maria Schneider Orchestra and Kyle Saulnier's Awakening Orchestra. Noordhuis and multi-instrumentalist James Shipp have performed as a duo for more than a half-decade and he a takes the drummers throne on Gullfoss. Throughout, the music here is captivating and Noordhuis has an extraordinarily wide range, sometimes disguised by her laid-back playing. "Migration" opens Side A in a dream-like trance and that meditative air carries over to "Indian Pacific," where Maeve Gilchrist's harp plays a prominent role in coloring the mood. Gilchrist lends a very different feel to "Killarney" where, along with Noordhuis, the musicians create a lyrical drone. "Silverpoint" and a stately "Seven Miles" offer a quietly cinematic quality to the program.

Eric Harland's Supa Nova is the drummer/percussionist's first solo album in a career that has seen his virtuosity displayed with Edward Simon, John Patitucci, Terence Blanchard, Joshua Redman, McCoy Tyner and others. He accompanies his drumming/percussion with unspecified electronics which he programmed prior to this live performance. In that context, we hear computer-generated sounds that mimic nature, convey mild yelps and whines, and, occasionally, straightforward melodies that mimic strings. Given Harland's status as a first-call drummer, it would have been nice to hear more of his percussion work unmodified by synthesizers.

FORQ is a quartet that features Henry Hey on keyboards, guitarist Chris McQueen, bassist Kevin Scott, and Jason Thomas on drums. Hey has worked with Donny McCaslin, Theo Bleckmann, Jeff "Tain" Watts, and Seamus Blake. McQueen and Thomas are both three-time Grammy winners by virtue of their parts in the Brooklyn-based jam collective Snarky Puppy. Scott has a broad cross-genre resume. He too has worked with McCaslin as well as John McLaughlin and guitarist Wayne Krantz. Aargau is FORQ's fifth album dating to their self-titled 2014 debut. While falling under the general jazz-rock tag, the emphasis here is on rock and funk. "Tazio" and "South" are not without a jazz fusion element but McQueen's electric guitar and Hey's organ on the latter track are pure rock energy. The more layered "Crush" builds slowly and dramatically to a screaming guitar solo.

Un Silencio Que Llegó de Lejos is the creation of the Marta Gómez & Andres Rotmistrovsky Duo. The title of the debut album from this pair, who have performed together for some time, roughly translates to "A silence that came from far away." Colombian songwriter Gómez, a two-time Latin Grammy winner, performs on vocals and guitar and Rotmistrovsky plays bass. Rotmistrovsky has played on more than fifty albums and has worked with a diverse roster of artists from Joan Baez to Rubén Blades. Stephan Diethelm occasionally joins the duo on his "glass bowls" percussion creation. While the music here is not jazz, pieces such as "Lucia" reflect a pop style with jazz influences. "Cancion En Sol" is a folksy ballad-like much of the material on the first side. Side B shifts the mood with the more upbeat "El Museo de las Distancias Rotas," "Esta Linda la Mar," "Soy Pan, Soy Paz, Soy Mas" and "Como un Secreto." Gómez' singing has a mysterious quality with a reassuring gentleness that makes Un Silencio Que Llegó de Lejos a pleasant listening experience.

Pianist Gadi Lehavi's Wishes finishes the box set in a most impressive manner. Lehavi is a prodigy who began performing at the age of ten. He appeared on saxophonist Eli Degibri's trio album Twelve (Plus Lion, 2013). His trio at Muri featured Romeu Tristão on bass and Daniel Dor on drums. Tristão debuted on Clean Feed Records in 2018 with the Ricardo Toscano Quartet. Dor has a pop background. He released a self-produced album in that genre in 2017. Lehavi paints from a broad palette; his classical "Intro," opening Side A blends well into the title track where the trio imparts a quirky Appalachian flavor that disappears into some sparkling melodic lines. "No Vowels Allowed" and "Mantra" feature some remarkably innovative and lyrical improvising from the young pianist.

The Newville label has never been one that dwells in darkness; tranquility, yes, but not gloom. In the label's brief history, it has offered listeners extraordinary recordings such as solo piano releases from Jack DeJohnette, Aruán Ortiz, and Noah Preminger's exploration of the Mississippi Delta Blues on Some Other Time (2016). Tied together only by a common venue, the six LPs in the Newvelle Muri box represent something of a multi-genre sampler, albeit at a substantial investment. The collection does not include liner notes for the six albums, instead offering a short story— unrelated to the music—for each album. A Swiss writer and musician, Michel Mettler, is the author of those pieces. As has been the case since Newvelle's inception, visual art is an appealing part of the package. The outer box and the individual albums feature the striking abstract photography of Marilyn Clark.