By Robert Bush
July 22, 2010
Sign in to view read count
Mundell Lowe Quartet
Saville Theater, San Diego City College
San Diego CA
July 13, 2010
Tuesday night's affair was standing-room-only for the rare appearance by Mundell Lowe, an iconic figure in the annals of jazz history. Lowe cut his teeth as an improviser in the Roosevelt administration—that he continues to perform with such vitality two years into the Obama era is nothing short of amazing. Lowe has the rare distinction of gigging with the legendary Charlie Parker, and in addition, his resume also lists work with such disparate icons as Benny Goodman, Charles Mingus, and Helen Humes, to name just a few. He also spent 17 years as a staff guitarist in the NBC orchestra, appearing on the original Today show with host Dave Garroway. 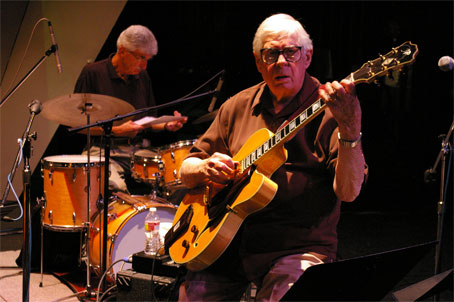