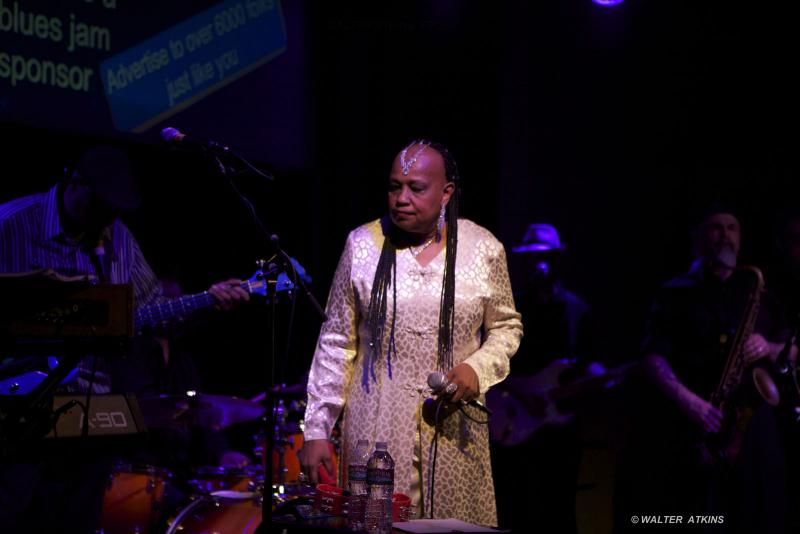 Seasoned San Francisco Bay Area blues vocalist and bandleader Ms Taylor P Collins and the TPC band played an invigorating midweek set at the Club Fox. The intimate venue, part of the historic Fox Theater is located in the heart of Redwood City's downtown entertainment district. On Wednesday nights, the club was devoted to a standing blues jam session. Vince Caminiti booked the groups and also sat in on guitar. Taylor mentioned a mysterious but loved "Blues Lady" who was an anonymous sponsor for the thrilling blues session.

The spirited TPC band fired up the evening with the Neville Brothers' funky cover of "Congo Square," written by Sonny Landreth. Next up, they jumped into the rollicking "J & B" from the late guitarist Jeff Golub's 2013 album Train Keeps A Rolling (E1 Music), which featured British Hammond B3 specialist Brian Auger (Oblivion Express). Organist Pamela Charlles Arthur and the robust band seriously worked out on the track.

When asked about the inclusion of the Golub song on her play list, Taylor replied, "I heard "J&B" on a music channel on DirecTV. I love big band tunes like that, especially if you have the musicians who can make it happen." She definitely assembled an effective group of great musicians who made it happen on this tune and throughout the fantastic evening. The band's ground breaking foundation consisted of the skilled Richard Aguon in the drum chair (The Whispers); versatile bassist Jeff Chambers (McCoy Tyner, Jeffrey Osborne); deft guitarist Rich Cravalho (Ray McCoy Tribute Band); and proficient Hammond XK3 organist Arthur (JC Smith Band, Lady Bo). Taylor's screaming horn section consisted of: Michael Peloquin on tenor, alto and harp; Grammy nominee Mike Rinta on sax, and Mike Parykaza on trumpet.

After "J & B" finished and the house was warmed up, Taylor took center stage resplendent in a satin print tunic and matching pants in beige and champagne tones. With a comfortable and commanding stance, she opened with the Etta James classic "Whatever Gets You Through the Night." With textured powerful vocals and a lethal band supporting her, Taylor had the crowd ready to scream with the opening notes. For the next number, Taylor and Co. went into their rendition of Tracy Chapman's biggest 1995 hit "Give Me One Reason" and the floor was filled with dancers while the balcony rolled with appreciative fans.

During the pleasurable night, customers used their ubiquitous smart phones to record the show. One admirer was holding up an iPhone 6+ in one hand while sharing the video with her Apple Watch on the other hand. Just cool.

Tonight's performance was dedicated to Taylor's brother, Gene Patterson, currently recovering from a stroke, and to guitarist Cravalho's sister Debbie, who's battling pancreatic cancer. The Bay Area blues treasure then introduced Otis Redding's stirring "Dreams to Remember" as ..."old folks funk." Then she proceeded to demonstrate why she is at the top of her craft. 'Dreams" was performed with smoldering energy and panache.

Blues paragon Riley "B B" King's signature "Rock Me Baby" was delivered in steamy fashion by Taylor and her killer band. "Baby" was originally written by blues guitarist Melvin "Li'l" Son Jackson as "Rockin' and Rollin" in 1950. The legendary King adapted the blues standard to his distinctive style and recorded it as "Rock Me Baby" in 1964. According to Taylor, "he [BB King] gave it notoriety." Other distinguished artists who covered this blues staple included the aforementioned Redding, Jimi Hendrix, Tina Turner, Jeff Beck, Muddy Waters, Johnny Winter, The Doors, Jefferson Airplane, and many more.

Taylor's original 2002 house rocker "Bluesified" had customers packing the dance floor and the balcony again. The soulful soprano encouraged her fans to "get up and hold hands" during the performance which included a wicked James Brown riff from guitarist Cravalho.

Ms. Taylor P. Collins and the TPC Band presented an enthralling evening of authentic blues music and shared life experiences at Club Fox, a hidden gem of a venue, on the San Francisco peninsula. This was this writer's first trip to the Fox and the beginning of more Wednesday night visits.