For over fifty years, Brian Auger has been a musician’s musician as Hammond B3 innovator, pianist, bandleader, session man and key player in the rise of jazz/rock fusion. Auger has incorporated jazz, early British pop, R&B, soul and rock into an incredible catalog that has won him legions of fans all over the world. Auger has played, toured, and recorded with many of the most influential musicians in modern times, including John McLaughlin, Jimi Hendrix, Paul McCartney, Steve Winwood, Tony Williams, Billy Cobham, Carlos Santana, Chaka Khan, Eddie Harris and Les McCann. Playing in clubs, Auger won the Melody Maker Reader's Poll in the "Jazz Piano" and "New Star" categories in 1964 and was a known commodity in swingin’ London’s burgeoning music scene 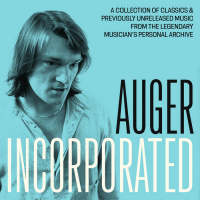 Duos galore in this set and an inter-generational array of artists, ranging from young up-and-comers in their early 20s to revered octogenarians delving into their vaults... or making their leader-debut! And much more... Happy listening! PlaylistBen Allison “Mondo Jazz Theme (feat. Ted Nash & Pyeng Threadgill)" 0:00 Natalie Cressman, Ian Faquini “Afoxé ...

I almost entitled this “A Vacation For Your Ears." Seemed a bit wordy, although surely accurate. An invitation to Studio1LA from owners and masters of immersive engineering Karma Auger (yes he is Brian Auger's son) and Erich Gobel (pictured left to right, respectively) was accepted with high expectations. Auger, the drummer, and Gobel, the guitarist, bring ...

In a 1977 magazine interview, New York Yankees Hall of Famer Reggie Jackson (in)famously referred to himself as “the straw that stirs the drink" for his team. On this trio set with organ player and composer Ron Oswanski and bassist-composer Christian Fabian (who also shaped the arrangements), the one and only original funky drummer Bernard Purdie ...