{{m: Jeff Golub = 7091}} initially made his name as an in-demand sideman during long-term gigs backing rock stars Rod Stewart and Billy Squire. Golub worked as a sideman for a diverse set of artists including Tina Turner, Dar Williams, Vanessa Williams, Rick Braun, Bill Evans, and Kirk Whalum. He released his solo debut in 1988 but then recorded several successful albums in the mid-1990s under his band name, Avenue Blue, which established him as a core artist in contemporary jazz. Golub returned to recording under his own name in 1999 and delivered twelve bluesy jazz albums until 2015

CurePSP provided seed funding for debut documentary by director Kyle I. Kelley The new film Train Keeps a Rolling, which dramatically documents the musical achievements and final years of the great jazz, blues, and rock guitarist Jeff Golub when he was battling progressive supranuclear palsy (PSP), will have its premiere in jny: New York City on ...

World-renowned guitarist Jeff Golub and his wife, Audrey were living a near-perfect life when Jeff suddenly lost his sight at the age of 56. What at first seemed a surmountable hurdle soon evolved into a much larger problem, as it became clear that Jeff had also developed a rare neurological disorder. Continue...
1
Article: Radio & Podcasts

Jazz Funk from Dean Brown and Lettuce, plus new releases from Oz Noy and Scott Jones. Playlist Dean Brown-Dennis Chambers “Breaksong" from D B 2 (BHM Productions) 00:00 Dennis Chambers “Plan B" from Outbreak (ESC Records) 07:59 Pickpocket “Bootstomp" from How 'Bout It (Self Produced) 15:57 Jeff Golub “Cold Sweat" from Do It Again ...

January 21 all-star concert planned to memorialize the guitarist and benefit his family sells out. New York, NY: When the newly blind guitarist Jeff Golub stumbled and fell onto New York City subway tracks where he was clipped and dragged by a train in 2012, New Yorkers came to his aid. When word spread throughout the ...

Guitarist Jeff Golub, a versatile contemporary jazz artist who also spent years as a sideman with rockers Billy Squier and Rod Stewart, died Thursday at 59, JazzTimes reported Monday. Though the exact cause of death has yet to be disclosed, Golub, a Copley Township native, had been suffering from a rare disease called progressive supranuclear palsy. ...

The Jazz Bridge First Wednesdays Neighborhood Concerts Series at the Cheltenham Center for the Arts, Ashbourne Road in Cheltenham—presents bassist Chico Huff on Wednesday, February 4. Showtime is 7:30 p.m., tickets are $10/$5 for students, and are only available at the door. For info: 215-517-8337 or visit jazzbridge.org/events/neighborhood-concerts. Originally a guitarist, Arlie “Chico” Huff has been ... 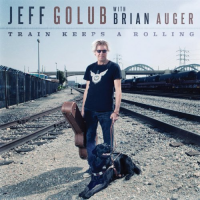 Label: eOne Music
Released: 2013
Track listing: The Cat; Isola Natale; Train Keeps A Rolling; I Love The Life I Live; Pusherman; How Long; J & B; Happiness Is Just Around The Bend; ; Shepherds Bush Market; Whenever You're Ready; Walking On The Moon.