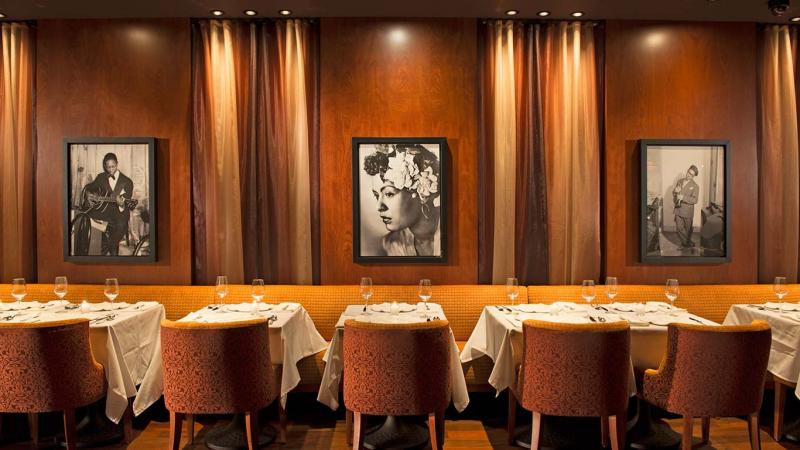 On the Saturday evening we were there, a smartly-dressed quintet of older musicians were playing what one might call “easy listening jazz.”

It's a name I don't think I've heard spoken of in many years. And so when I learned that after many years, "Minton's Playhouse" was re-opening at its original address at West 118th Street in Harlem on the ground floor of the old Cecil Hotel, I was really delighted. Delighted that the unassuming little nightclub where Bird and Diz' and Monk and the rest of the greats and near-greats all went to jam was back in business after a fire in 1974 had shut it down.

Although I grew up in the Bronx and lived in mid-town Manhattan for over ten years in the late '60's, I'd never gone to Minton's. Birdland, the Five Spot, The Jazz Gallery, The Blue Note, The Half Note, Slug's, Sweet Basil, and the Village Vanguard are all the great jazz venue's I was lucky to frequent. But never Minton's. It was not very highly publicized at the time and there was little if any music of note being played there.

But now as part of the ever-burgeoning Harlem Renaissance, Minton's Playhouse is back up and running. The space retains its original diminutive, intimate size with narrow tables on either side facing the wall (not the bandstand as with the original Minton's). The dark, film noir atmosphere is a lot more stylish and formal than what I imagine it probably was like back in the '40's and 50's. There are classic life-size black-and-white photo murals of the very greatest of the Jazz Greats—Miles and Ella and Dizzy, Lady Day and Monk, Prez, and of course, Bird. Behind the bandstand, the original colorful mural depicting a small bunch of Be-boppers lolling around in a cramped room has been carefully restored.

On the Saturday evening we were there, a smartly-dressed quintet of older musicians were playing what one might call "easy listening jazz." It was pretty, melodic and not very much like the high-intensity Bop tempos that Bird or Dizzy would have been playing. Nobody called "Cherokee" or "Salt Peanuts." The patrons this Saturday night were talking and eating and the music was quite literally background. Luckily though the acoustics and the sound system were both quite good and even though our table was a fair distance from the bandstand, it was possible, for the most part, to listen and appreciate the music that was being played.

For me, Bertha Hope's graceful solos were well worth the price of that evening's admission, and after the set I had a chance to speak briefly with her backstage. She seemed surprised that someone actually new the name "Hope" and associated it with some of jazz's finer piano playing moments. Elmo Hope was born in 1923 in New York City, where he grew up with musicians like Bud Powell, Johnny Griffin, Percy Heath and Philly Joe Jones, and later was a side man with Sonny Rollins, John Coltrane, Clifford Brown and Harold Land. Elmo's wife, Bertha, was born in California and began taking piano lessons at about the age of three. It was Bud Powell's playing that hooked her into the jazz idiom, and she was becoming a sought-after pianist in the '50's when she met Elmo. They did record two piano albums together, but Bertha put her own career on hold as the spotlight began to shine more brightly on her husband. He was one of the pianists just about everyone back then liked playing with.

Listening to Bertha Hope that night at Minton's reminded me what if feels like to just relax into the groove the way that the great players have always done. Her velvety touch on the keyboard is not unlike that of Hank Jones, and though it's easy to hear how much she was influenced by the whirlwind of originality surrounding her during the growth of Be-Bop, she maintains her own conception, her own sound, her own time feeling that really and truly swings. If anyone belongs at the new Minton's Playhouse today, it is the musically beautiful Bertha Hope.