In 1960 she married Elmo Hope, moved to the Bronx, and played with musicians including Jimmy Castor. She played workshops in the tri-state area with Dizzy Gillespie, Frank Foster, Philly Joe Jones and Nat Adderley who became a friend and mentor.

As co-founder of the all-women's quintet, Jazzberry Jam! she toured Europe and Japan.

and the second from Dr. Billy Taylorin 2005 at the Mary Lou Williams Jazz Festival in Washington, D.C.

In 2014, Bertha's three year oral history project was made available in the Library of Congress,

and she was celebrated as a Bronx Living Legend by the Bronx Music Heritage Center.

Since October, 2013 Bertha is in residency at Minton's Supper Club, Harlem. Show less 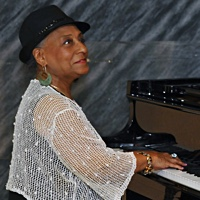 All About Jazz musician pages are maintained by musicians, publicists and trusted members like you. Interested? Tell us why you would like to improve the Bertha Hope musician page.