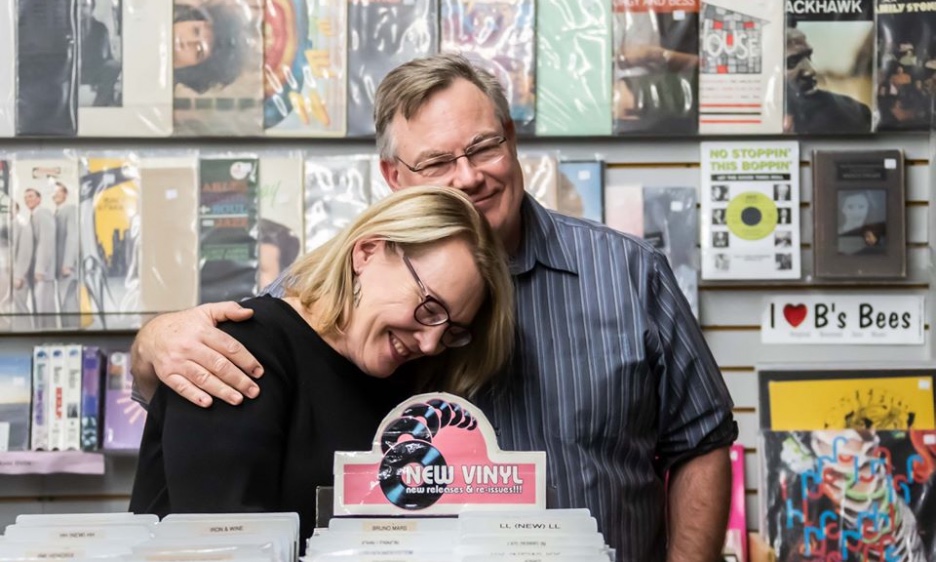 BY TESSA SOUTER AND ANDREA WOLPER
March 2, 2020
Sign in to view read count

My first job was in a record store in high school and by the time I was 20 I had probably 2,000 albums and was going to every concert I possibly could.

Like many of our Jazz Super Fans, Tom Kohn's passion for music started when he was a teen, with a job in a record store and a penchant for acquiring albums that would impress even the most dedicated adult collectors. He grew up into a music business day job but, after suffering a life-changing event, he decided to make a go of his first love: selling records. At the same time, the Rochester, New York native found what we think is a pretty creative solution to the problem of spending time and money traveling to New York City to attend concerts; read on to find out what it was.

Tell us a bit about yourself.

I was born and grew up in Rochester, New York, where I still live and own a record store, Bop Shop Records. I have a "regular irregular" schedule of live performances there. My first job was in a record store in high school and by the time I was 20 I had probably 2,000 albums (I had taken over my parent's basement) and was going to every concert I possibly could. After high school I worked for a guitar effects company, MXR, as a production tech doing in-house repairs and testing. I also worked for then-distributor Rounder Records doing sales in all the stores, where I learned so much about every genre. And then I lost my son and that changed my life. I decided to refocus my energies and start selling records.

I started out buying and selling used records in 1982 at a semi-permanent weekly flea market store (also called Bop Shop), which morphed into the physical record store by the mid-'80s. I've also been presenting jazz and other music there since around 1988. No artists were coming up to Rochester in those days and I was blowing $500 bucks to fly down to hear music in New York. So I thought why not invite people to come here and play and pay them the $500 instead.

Since then, the record business has been through many ups and downs. Rollercoaster is a mild way to put it. It's been through hell and back for a lot of different reasons but right now it's good. We're enjoying a really healthy resurgence of interest in vinyl. And there's a lot of great music out there at the moment—especially in jazz. In bad political climates the arts tend to flourish because people have more to say. Record stores are an important link between the people who create music and the people who listen to music, and it feels good to be a link in that chain.

We didn't listen to a lot of music at home. My parents had the Kingston Trio records and Tom Lehrer in their collection of about 20 records. Lehrer sang funny songs that worked my mind pretty early on. Then, by high school, I was listening to Pink Floyd and The Who and all that stuff. The Kinks were my first favorite band.

How old were you when you got your first record?

I was given a box of 45s from a relative when I was about 12, but I can't remember what they were. I mostly learned about bands like the The Beach Boys from my friends' older siblings. When I was a teenager a friend gave me his record collection—a crate of British Invasion records: Pretty Things and The Move—which I loved.

What was the first concert you ever attended?

Elton John. It was my first big concert and I was pretty high. I liked it but I didn't fall in love with his stuff. But there was a band called Family which opened for him, and I really liked them. They were kind of like psychedelic jazz. I liked the saxophone and the way Roger Chapman sang and wrote songs. It was so unusual. I immediately checked them out and bought their records. I actually met Roger Chapman in England years later. That was a thrill.

Was there one album or experience that was your doorway to jazz?

I loved Julie Driscoll's 'Wheels on Fire' and 'Tramp.' Then when I was working at the store in the early '70s I saw a Carla Bley record, Tropic Appetites, that had Driscoll on it when she was called Julie Tippets— after she married Keith Tippets. She had left pop and gone into singing more free jazz. And that was my introduction to the genre. My first jazz record that I specifically remember going "Holy shit, what's that about?" was Miles Davis' Jack Johnson. I was already into Soft Machine and that stuff, but after that, and the Carla Bley record, it was all out. And then I saw the Anthony Braxton Trio with Dave Holland and Barry Altschul. It just led on from there. By the time I was 20 I had 1,000 jazz records.

How long have you been going out to hear live music?

Emotion, spontaneity and passion! And sometimes a little humor. It's a connection you have with another human. As an artist does what he does, you look for that bridge that ties you up with whoever it is. It can come in different forms. You are at a concert and all of a sudden magic happens. My favorite example is Michael Blake at The Xerox Rochester International Jazz Festival. I went to the first set and it was killing. Then at the second set—it was at the Montage club—they really got going. They were so connected and did an encore that lasted 45 minutes and it was just this magical thing. I don't even know how they got back to the hotel. When I saw Ramsey Lewis, Anthony Braxton opened for him. Everyone hated it except about 15 of us in the front row who were all loving it. It's almost tribal in some way. It's why I like intimate venues and my store. You can hear a pin drop. You're in the same air and hearing the same breath.

A pure connection between the artist and the audience. >

What is the most trouble you've gone to or the farthest you've traveled to get to a jazz performance?

I drove 800 miles to Iowa City for The Iowa City Jazz Festival specifically to see Allison Miller's Boom Tick Boom. My wife and I are huge fans of all the band members. We got to the festival and Jan's phone rang and her dad had died. So we just sat down and watched Boom Tick Boom. It was therapeutic. The festival has a beautiful atmosphere.

Muddy Waters. One of those guys who was around a lot in the '70s and I feel I should have known better than to miss out on. I wish I was old enough to have seen Miles when he was at the Nugget, a local club, when I was about 15. I was still a rock kid then.

John Coltrane, Thelonious Monk, Charles Mingus and Miles Davis, not just because they move my soul, but because all of them were doing things that foreshadowed what was to come. They were the game-changers.

I went to see someone in a beautiful room recently. It was a really lovely venue. And of course this couple were talking. This inevitably happens when you go out to a club. But at my own venue—a space at the back of my store, BopShop Records—that never happens. It's a listening room. Talk between tunes, if you like, talk afterwards, but don't talk during the music.

Tell us more about the venue part of the shop.

I have drums, piano, amps, everything anyone needs. It seats 60 people and we charge a cover on the door—all of which goes to the musicians. Sometimes I have to supplement if I don't make the guarantee. But it's worth it. We have had so many people—the ICP Orchestra, Steve Lacy, Joe Farnsworth, Billy Bang, David Murray, Paul Smoker (who was a real champion of the store), Ralph Alessi and more. And almost everything is recorded.

Which club are you most regularly to be found at?

There are a couple of places in town I like. The Kilbourn Hall in the Eastman School. It's got good sound. People respect the place. There's a smaller room at the school that only seats 200, Hatch Hall. It's new and they use it for solo piano stuff. That's a great room too. Lovin' Cup can be a good room too, depending on the crowd.

There was a club in town called Red Creek. I saw Bonnie Raitt, King Sunny Ade, Stefan Grapelli, Gang of Four. The owner had a lot of great people there in the '70s and '80s.

How do you discover new artists?

If you were a professional musician, which instrument would you play, and why?

I attempted saxophone briefly. I like guitar music a lot. I think, though, I would choose saxophone. But any instrument. My parents stopped me playing the saxophone because they thought it would mess up my teeth. Weird. They were old fashioned.

Thinking people. There's such fresh stuff going on in jazz. It's not music of the masses and it never will be. But the kind of music I am hearing, and bringing up here, whether it's writing new arrangements of Sesame Street or whatever, it keeps people thinking. It keeps people alive. It's important stuff. Otherwise we would all stagnate, and that, to me, is death.