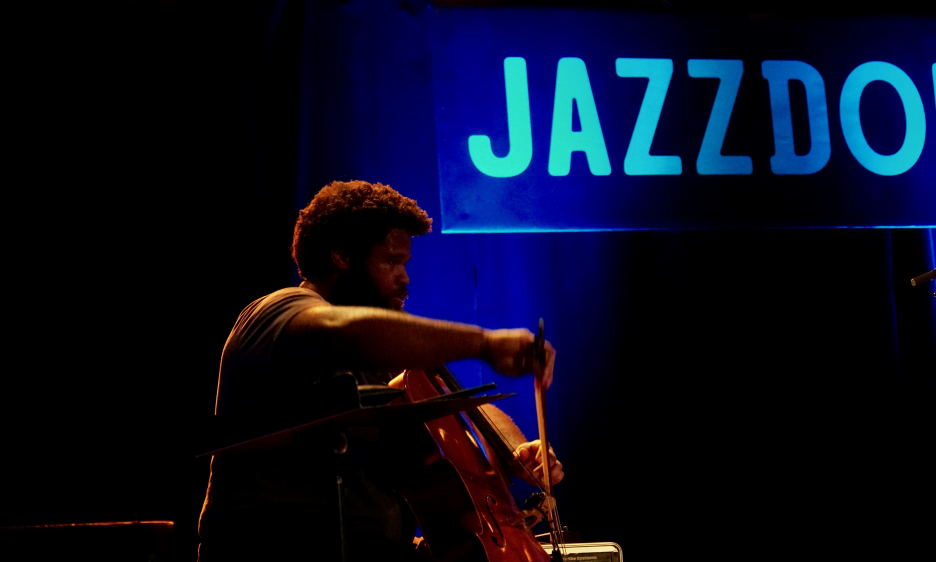 Jazzdor is a unique double-sided European jazz festival offering a 15-day November edition in Strasbourg and environs including German town Offenburg on the opposite side of the Rhine river, and it also presents a June edition in Berlin. It is a bilateral French-German affair embedded in a multinational panoramic view. We are now half-way to the Berlin edition 2020 taking place in June at Kesselhaus in Berlin Prenzlauer Berg.

As usual, a slot was reserved for the drums: (Flament/Lemêtre, Christoph Marguet, François Merville) as well as for Jazz Migration (House of Echo, No Tongues), and, as an extra color, for a Creole Spirit (Jacques Schwarz-Bart/Omar Sosa) trail.

Jazzdor artistic director Philippe Ochem has his very own rationale of programming. Seeing certain familiar names reoccurring frequently in the program might appear a bit conservative at first sight. However, it is shows that development and growth is built on and around solid and fertile kernels. These are (re)combined with new external elements of collaboration. The festival has three elements of growth in focus: (1) growth of individual musicians/groups over time, (2) growth in terms of new collaborations of up-and-coming talent, as well as proven forces, (3) growth in terms of expansion of bold musicians and groups from a great external variety of challenging artistic universes/biotopes. It is an approach that clearly works on the two corners of the baseline of a general triangle of programming (see here in the slideshow), the CHALLENGE potential and the DEVELOPMENTAL/GROWTH potential of acts, with the REPRESENTATIONAL/ENTERTAINING potentials at the top of the triangle, potentials that together evoke an ATMOSPHERIC CONTENT of its own.

The 2019 edition ran from November 8-23 containing 34 concerts. Hence, a review can only cover part(s) of it. I attended the festival from Sunday to Wednesday, November 10-13.

The day before arriving in Strasbourg, I attended "Rituels" at Maison de la Radio France in Paris. "Rituels" is a new work for four vocalists and a 13-piece line-up of Orchestre National de Jazz (ONJ) under the direction of Frédéric Maurin. It consists of five compositions by Sylvaine Hélary, Grégoire Letouvet, Leïla Martial, Fréderic Maurin and Ellino, and was performed by the vocalists Leïla Martial, Ellinoa, Linda Oláh and Romain Dayez, four strings, six horns, piano, vibraphone and drums. It revealed itself as an amazingly manifold unconventional affair of great sophistication.

There were plenty of possibilities to bring in and unfold the rich instrumentation and make use of the copious supply of musical talent in the line-up. There were great trumpet chirps surfacing from within the orchestral waving, as did, for example, the cello excursion and the call-response driven drum expedition. No classical soloing thus, but a natural moving in a sonic space. There was the strong operatic voice of Romain Dayez in the most ritualistic, declamatory, processional part, but also as counterpart the elf-like "Naissance de la Nuit," with its fragile fluidness and small sonic gestures. And again, quite different was Leïla Martial's delirious musical action field of waves, warps and vowels—staggering, swelling, warping, tumbling, rhythmic syllabic juggling.

The next day in Strasbourg, a Sunday, would provide a continuation with another opus of ONJ, "Dancing In Your Head(s)— La Galaxie Ornette," which was a revelation compared to other recent renderings of Ornette's music. While the same program presented earlier the year at Jazzdor Berlin rendered dynamically less satisfying music missing "something," a deeper livelihood (see my review), now five months later in Strasbourg ONJ showed how to implement and integrate a bubbling swirling core into a large ensemble's music.

The Strasbourg concert found its dynamic edginess in the combination of smaller parts of the ensemble and larger sound walls, as well as mighty confluent sound layers of the Big Band as a whole. An edgy jamming core group was fired up, highlighted and elevated by 'big sounds' at right moments, and vice versa. Frederic Maurin, the new ONJ director, succeeded in a turnaround, and as a result, an overall fiery piece of music was created due to a changed dramaturgy.

French Orchestre National de Jazz is a long-standing institution that can look back on a varied history with respect to musical directors and approaches. With the instalment of the new musical director, guitarist Fréderic Maurin, things now develop in a new direction. OJN is now no longer an ensemble with a stable line-up for a three-year term. Each project can be worked out with its own line-up that also may contain non-French musicians from outside France such as, for instance, Portuguese trumpeter Susana Santos Silva. ONJ consequently has become an internationally staffed national ensemble (a normal occurrence in the classical field). This is a contra indication to the prevailing image of a rigorously closed French jazz field and a shining prime example for other countries, especially in Scandinavia. With three diverse programs, ONJ is now clearly more present than before. There is a challenging Ornette Coleman program "Dancing In Your Head(s)"—La Galaxie Ornette," a 'vocal' program "Rituels" with four vocalists containing five compositions, and the youth program "Dracula"

"La Galaxie Ornette" was preceded by three smaller configurations: Miles Okazaki's guitar-solo with Monk compositions, the young all-female trio of saxophonist Maria Grand, both from New York, and German-French quartet of pianist Florian Weber with bassist Joachim Florent, drummer Edward Perraud and New York saxophonist Loren Stillman subbing on short notice for regular saxophonist Anna-Lena Schnabel. Stillman filled his role convincingly thereby enriching the group's music with an extra refined accent. Monk on bare electric guitar is something uncommon and Okazaki indeed achieved a real unadorned quality of Monk's music in his playing that led into a shifted and fresh listening experience. The strikingly young trio of saxophonist Maria Grand, bassist Kanoa Mendenhall and drummer Savannah Harris on its turn was surprising, with its startling artistic maturity, versatility and creativity. Grand (1992), a sidewoman in ensembles of Steve Coleman and Mary Halvorson, surely is an up-and-coming new type of artist in her own right.

Two more attractive festival nights followed. First a night with well-known French trio Ikui Doki joining forces with Swedish vocalist Sofia Jernberg and the Fly-Or-Die group of trumpeter Jaimie Branch with its "Bird Dogs of Paradise" program. Ikui Doki, with its unique unconventional and charming line-up of bassoon (Sophie Bernado), saxophone (Hugues Mayot), harp (Raffaëlle Rinaudo), and Sophie Jernberg's boundless voice, navigated through a wondrous field of historical innuendo and peculiar stylistic transformations. Jamie Branch never pursued refinement but preferred to ride on the wild side. She cleared the air with her wildly determined striking punches. Branch, cellist Lester St Louis, bassist Jason Ajemian and drummer Chad Taylor, sparked a fiery dark storm rising and raging in a space of turbulent flares of feelings. The deeply soaked color of their music conjured just so much more than a fashionable blues noir. With a mighty welling up, and a heavy push from deep yonder, Taylor, Ajemian and St. Louis opened an unparalleled force field for Branch to cross and cut through, to shout out and howl, to brand and damn. Then, the second and also my last night, offered the large-scale French percussion duo of Benjamin Flament and Sylvain Lemêtre-large-scale because of the impressive battery of assorted percussion devices filling the whole stage. Jazzdor has built a long record of percussion duos as a regular slot of its program over the years, and, if possible, I try to catch that. It was something special to experience he magic of these two percussionists in deep concentration on one stage (complemented by the rapidity of the dismantling of the 'percussionscape' on stage afterwards). Experiencing this is a good step up to checking this kind of percussion that is one of the French specialties.

Subsequently another large ensemble, the German-French Trans Europe Express of pianist Hans Lüdemann https://bulletin.swarthmore.edu/bulletin-issue-archive/index.html%3Fp=383.html target=_blank>(see more here) came in to present its new "Polyjazz" program. As a satellite program that very night also Amir ElSaffar's six-piece Two River Ensemble played a concert in Mulhouse at La Filature, a location 120 km south of Strasbourg, also known for its free-improvisation festival in August (for an audio recording of the concert through France Musique you can listen here). Apparently, the musical dining table was richly set.

Trans Europe Express—an allusion to the first pan-European high speed railway network initiated decades ago by the director of the Dutch railway company NS— comprises four French and four German musicians, convinced by the tangy and witty rendering of its shifting rotational complexity, its fast-forward propelling velocity and its great dynamics, its looseness, light-footedness and structuredness—un qualité extraordinaire emerging from the distinguished voices of trombonist Yves Robert, and guitarist Kalle Kalima, bassist Sebastian Boisseau and drummer Dejan Terzic, the saxophonists Alexandra Grimal and Silke Eberhard, violinist Régis Huby and pianist Hans Lüdemann. The ensemble's music is also excellently represented on its recent Polyjazz album released by the Hungarian BMC label (Budapest Music Center). 'Poly' is the programmatic rationale for the ensemble's efforts meaning the music is polyphonic, polyrhythmic, polyharmonic, polychromatic, and polystylistic, including microtonal interstices and fuzzy edges. Format and line-up constitute a similar challenge to that faced by the Ornette Coleman venture of ONJ, to integrate and reconcile the possibilities of a small group with the colors and the dynamics of a flourishing large body of sound. The main asset is the rich cumulating musical experience these eight musicians contribute to the playing in, and composing for, the group. It is a configuration that started out 2013 in Paris and has since then proved as a place where experienced, creative and original musicians collaborate to develop music from their very own angles and backgrounds in a longer-term perspective, with a strong sense of communion and unity increasingly permeating the flourishing diversity.

Actually, there are not many configurations incarnating such a treasure of experience that are long-lastingly active on such a high level and with such wide perspective. Against this background it is rather astonishing that such a group seems to be a bit under the radar and not present at more prominent festivals and venues as a shining musical example. In the group's music you can find a plethora of elements that often get high (and hyped) attention as singularities for other groups. It is an ensemble focused purely on the music with apparently little interest in auratic emanations, hyperbolic imagery or extravaganza.