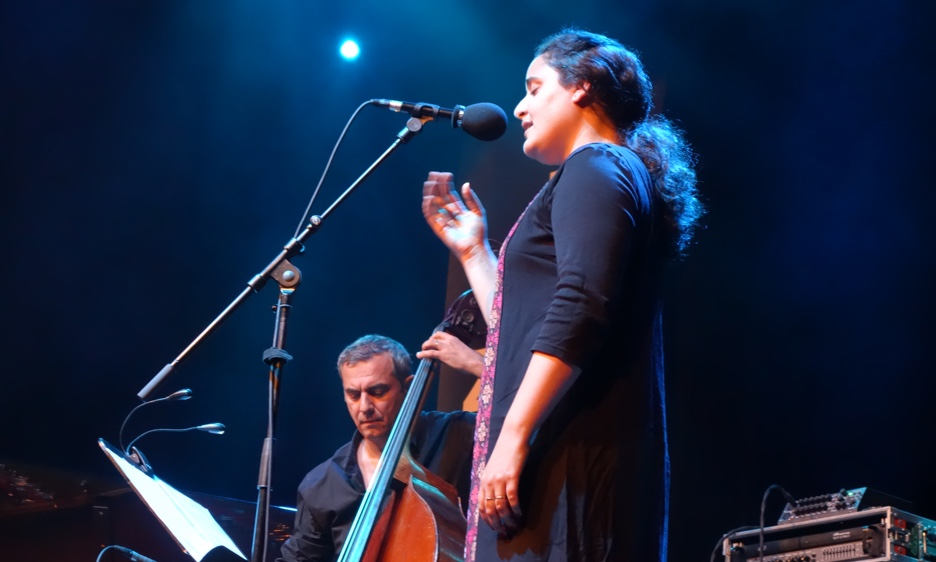 Jazzdor Berlin is one of the few truly, consistently and enduring European minded and spirited jazz festival events around—an initiative taken by Phillip Ochem, the artistic leader of the Strasbourg festival Jazzdor, more than a decade ago.

Unlike other festivals that now and then guest one-time partnering spots the Jazzdor event at Berlin turned out to grow into a unique real long-term annual satellite festival of its own from the very beginning in 2006. And it looks as if a second satellite will be launched next year in cooperation with Budapest Music Center (BMC) in the Hungarian capitol. It will be the offshoot of a longer tight French-Hungarian cooperation including musicians of both countries.

This year's edition presented 11 configurations during four nights chosen and curated by the curating hand of artistic director Philippe Ochem. All concerts took place at the Kesselhaus venue of Berlin Kulturbrauerei in the Prenzlauer Berg borough: three duos/trio, six quartets, a double trio and a new version of the 17-piece Orchestre National de Jazz. 10 of the 11 acts, believe it or not, were premieres.

As a French festival in the German capital Jazzdor Berlin offered a rich mix. There was a Norwegian-German-French configuration (Sandtorv/Gropper/Risser/ Baumgärtner), a French-German configuration (Perraud/Schnabel/Weber/Florent), a combination of French with North-American-English migrants and Berlin related musicians: French pianist Benoit Delbecq, Englishmen Tom Arthurs (trumpet), a former Berlin resident now teaching in Bern, newest Berliner, drummer Jim Black, and Canadian Berlin residents Miles Perkins (bass). These were completed by four French constellations: the duo CLAUDIA SOLAL/Benoit Delbecq, the trio of Naïssam Jalal with Claude Tchamitchian and Leonardo Montana, the Trio En Corps and the Jean-Marc Foltz Quartet. Three eminent and ubiquitous jokers 'ran' through this program: French pianist Benoit Delbecq, French drummer Edward Perraud and pianist Eve Risser, all three from different generations. Last but not least two young configurations of this year's Jazz Migration selection were presented, the quartets House of Echo and No Tongues. The Jazz Migration program offers emerging creative jazz musicians opportunities to build their careers, develop their skills and get their music out into the world (see my article here).

This edition provided a remarkably distinguished and memorable musical experience at the beginning as well at the end -both nights formed a strong bookend this year. In between it offered a 'weites Feld' (wide range) of diversity in terms of backgrounds, temperaments, temperatures, volumes, small and big sounds. I will proceed here from the concerts of these two bookending nights to the concerts of the two nights in between.

The three musicians of Quest of the Invisible, flautist/vocalist Naïssam Jalal, bassist Claude Tchamitchian and pianist Leonardo Montana led the audience in a magical flight into the mysterious whispers and secret fires of the night, roaming the vastness and depths of its shimmering darkness. While this beginning had a mysterious, deepening contemplative character, at the end the group No Tongues wandered along musical echoes of pagan shamanism vocal conjurations, to tap into and merge with ancient everyday voodoo practices. Both groups operated on a deep musical level with a masterful timing and provided their strong expressive musical techniques with a speaking context and a strong significance and impact. Musical expression in both cases stood for something strongly speaking to listeners' imagination and emotion. Especially No Tongues from this year's selection of French Migration program opened a completely new door of highly original expression. Both concerts were examples of a new quality in merging heterogeneous cultural sources and traces, in the case of Quest of the Invisible Syrian, Armenian and Brazilian backgrounds, in the case of No Tongues a diversity of ancient sources.

Due to a new approach OJN is now no longer an ensemble with a stable line-up for a three-year term. Each project can be worked out with its own line-up that also may contain non-French musicians from outside France. ONJ consequently has become an internationally staffed national ensemble (a normal occurrence in the classical field) especially for this Ornette Coleman program under direction of guitarist Frédéric Maurin, named ""Dancing In Your Head(s)"—La Galaxie Ornette." From 'outside' three musicians have been added to the ensemble: Susana Santos Silva, a young Portuguese trumpeter residing in Sweden,Anna-Lena Schnabel, a young saxophonist/flautist from Germany and famous old hand saxophonist Tim Berne from New York. In how far is the music of Ornette suitable for reducible to ordinary BigBand treatment and rendition? The orchestra had a thick messy sound, which increased the worry. After a short period of getting into the game, it all improved considerably, got looser, edgier and more and more Ornettish with remarkable fiery soloing spots, especially that of Susana Santos Silva. I am looking forward to the next programs when the process has to be run through again.

The first night was finished by Unbroken, a quite new, mighty Norwegian-Italian-French double trio that consists of violinist Régis Huby , viola player Guillaume Roy and cellist Vincent Courtois on the French string side, electronic mastermind Jan Bang and guitarist Eivind Aarset from Norway and Italian percussionist Michele Rabbia. The three French string players are strong musical personalities bundling enormous power when joining forces. The troop succeeded with bravado: to push and give space in prudent combination thereby sparking cosmic rays and swirls on its UFO-flight to outer space.

Bubbling, burning diversity in between

The duo of vocalist Claudia Solal and pianist Benoit Delbecq and the quartet of (bass) clarinetist Jean- Marc Foltz were the tried and true configurations in the ring.

Foltz, together with Philippe Mouratoglou on acoustic guitar and French famous rock solid rhythm tandem of bassist Sebastien Boisseau - Matthieu Donarier and drummer Christophe Marguet, went 'to catch' a couple of the wildest of wild beasts -bête féroce—in musical bêtage—a highly enjoyable and entertaining affair with tribal tones and trancing trends, music truly needed in these wild times. The new compositions of the ebony blower, rooted in a collection of African photos of Nicolas Bruant, were premiered at the Strasbourg festival last November.

From a different angle, the duo Solal/Delbecq came into the listening space: intimately with highly delicate vocal markings —concise, airy, squirrelly—and goose footprints dancing around. It rendered a first class performance -a new kind of Pierrot-Lunaire-phrasing—of unique flair and a fascinating expressiveness beyond the beaten track.

"The artistic collaboration between Claudia Solal and Benoît Delbecq has dawned in the fall of 2013 : it was totally evident. Their first concerts take place in November 2015, during a tour in Chicago organized by the French association The Bridge, with Antichamber Music quartet, around poems by James Joyce (with bassoonist Katie Young and cellist Tomeka Reid). Back in France, they decided to continue as a duet, and soon record imaginary and improvised songs with suggestive titles, from texts by Claudia : No sake tonight, Inner otherness, Burning green, Ultimate embrace ... From this singular alchemy, arises a cosmic and timeless chant, playing with all transparencies : an impetuous and powerful music, deeply intuitive,— shifting and moving music." (taken from Claudia Solal's website)

French pianist Eve Risser, Berlin musicians Philipp Gropper (saxophone) and Moritz Baumgärtner (drums) and Norwegian vocalist Natalie Sandtorv, know each other from earlier Echtzeitmusik meetings in Berlin and Oslo. Philipp Gropper (1978) is one of the main figures of the Berlin scene (Hyperactive Kid, Philm etc.). Moritz Baumgärtner (1985) is a versatile musician operating in jazz (Lisbeth Quartet, Melt Trio) and rock bands. Natalie Sandtorv is a vocal force from Norway, who worked in the Bergen, Oslo, Copenhagen and Berlin free jazz scene and is a rising star in Norwegian experimental pop music (see my review at here).

For the Jazzdor appearance, the feverish creative spirits of these vanguard musicians had the opportunity to work together more thoroughly for a few days to co-develop their pieces. In the performance they took a slow pace to gradually condense, unfold gestalt and unleash higher energy levels. For me it felt like weird sounds hauling through the inner of the whale. Would they hold on in slow pace together and stay patient or would all burst in thousands of snippets, flow away or collapse? It became quite tense and energetic simultaneously. The group came quite close to the point where the music can fill itself in. The knot was still waiting to be untangled. Personally I liked the mixture of weird sounds, clear presence, pulsing persistence and transitional imperfection. This configuration has great potential—not at least due to its different temperaments, cultural backgrounds and approaches. I am looking forward to see them going with the escalator over the hill.