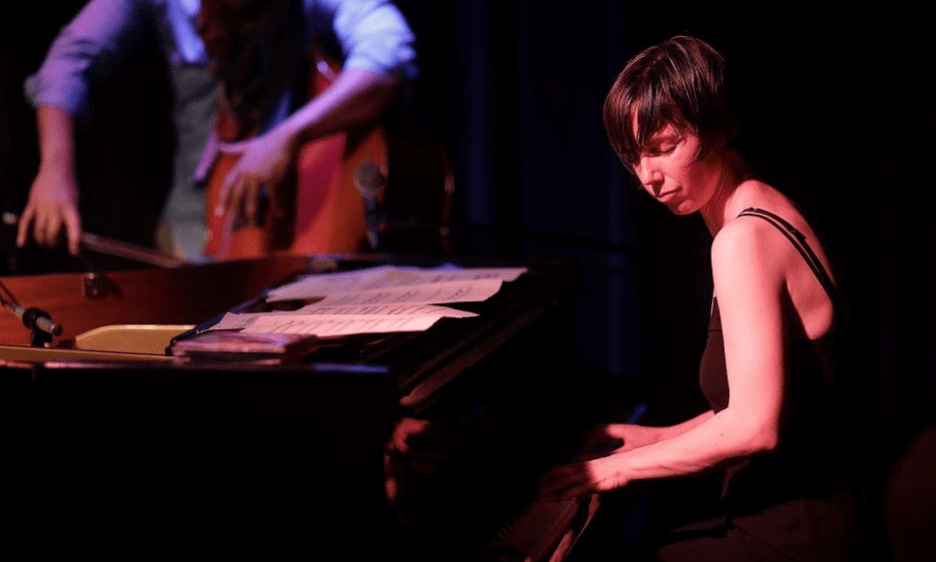 It was my first love, Bill Evans Trio, Ahmad Jamal, there's something so intimate about those first records I discovered, and wanting to be able to have that level of communication. &#151Brittany Anjou

Pianist/composer Brittany Anjou may not be a resident Seattle musician in the strictest sense of the word. Having departed as many do, to create a base and an identity in New York, Anjou returns to Seattle often to perform and visit. She spends a portion of her year teaching in Kuwait as well, making the intrepid Anjou a bit of a world resident.

Anjou first became acquainted with jazz within the programs of the Seattle School District, culminating in the nationally acclaimed program at Roosevelt High School under the baton of Scott Brown. Wanting nothing more than to perform with that band as a sophomore, the pianist was looking at a depth chart in front of her that included Aaron Parks and Brian Kinsella. It prompted a change to the vibraphone, and studies with Seattle based artist Susan Pascal. From there, she studied extensively in New York with Stefon Harris. It would seem unlikely then, that 2019 would see her brandishing a brand new piano trio album on a respected label that attracted international attention, including a 4 ½ star review at Downbeat, and the equivalent at All About Jazz.

Enamigo Reciprolataj (Origin, 2019), which translates to "reciprocal love" in the international Esperanto language, brought to light Anjou's personality on precise terms. The music showed a fearless sense of adventure, exquisite playing, and original compositions that expressed the diversity of Anjou's artistic palette, very much through the lens of her personal vision of the traditional jazz piano trio. There is the pensive value of Bill Evans, the image based wanderings of Ahmad Jamal, and the gentle edges within intense form of Jessica Williams. While Anjou as well performed in other ensembles, and other genres, the piano trio seemed to more access the emotional center of her expressionism, in the most honest way possible. "It was my first love, Bill Evans Trio, Ahmad Jamal, there's something so intimate about those first records I discovered, and wanting to be able to have that level of communication. That's the goal, and has always been inspiring to me," she recalls.

Anjou performed at the 2019 Ballard Jazz Festival with her Northwest trio, featuring bassist Evan Flory-Barnes, and drummer Todd Bishop. She returned later in the year to tour with Flory-Barnes and drummer Matt Jorgensen. As the west coast version of the trio became more and more accustomed to Anjou's unique compositions, the music began to flow much like with her New York band that includes bassist Gregory Chudzik and drummer Nicholas Anderson. The music tends to spool out like a rhythmic ribbon of sound with no end in sight, searching and probing for resolution. Recreating the vibe that was achieved in the studio onstage nightly while on tour is always a rush, always a challenge. Taking the music away from her comfort zone to perform with musicians that she grew up admiring in Seattle was an experience that helped both the artist and the music grow.

"The record definitely came out the way I hoped. I'm grateful for that. I think what's wild is that there's a point of departure for every record, and the life of the record has a separate life than the life of your tour playing it live. I think what is wonderful is getting to have the process of recording and releasing an album. To get to tour with it as well is special. What I found with the live life of it, I grew with each band I did it with, I grew deeper into the interpretations. Especially with Evan (Flory-Barnes) and Matt (Jorgensen), there's a point of departure where you start to read each other's minds-that's the most exciting part. It feels like I have a long way to go in that vein of finding that connection. You get to do that on tours, and you're playing every night. That kind of high I've always dreamed of experiencing," she says.

As a jazz pianist, performing in her original voice in the trio session is in a sense, working in a comfort zone. Playing gigs under other bandleaders is quite another, an experience she especially is appreciated of, and humbled by. She performed along with Jorgensen and Flory-Barnes with Seattle trumpeter Thomas Marriott while in Seattle, a musician she has always held in the highest esteem.

"When I played trio it was my music, my comfort zone, me, me, me. With that comes the responsibility of calling a set list, organizing the band. When you're playing a side role, it's such a wonderful gift after leading! It's a breath of fresh air. Ok, now I just get to play my instrument and dig into the tradition. There's trust, a framework, a deep lexicon, and a wind tunnel came over me that night onstage with Thomas, Pete, Matt and Evan. It was like a really good jazz movie. That night I literally got on stage with heroes who I've looked up to for years while growing up in Seattle, and I felt so much energy and excitement before the show, knowing I'm about to play with them as a sideman for the first time, knowing my family was there to see it was incredible. It was totally surreal to do that for the first time. It's everything I could have dreamed of, and luckily it happened," she recalls.

Whichever way her creative impulses may lead her, Anjou's connection with the city that launched her on this journey remains solid. She continues to search, explore and share her gifts with us on her own terms. There is a strength and courage that reveals a certain vulnerability in her work. Even more so, there is excitement as to where this all leads.