Brittany Anjou is an American composer, vocalist, and piano focused multi-instrumentalist based in New York City. Exploring everything from Ahmad Jamal to Bikini Kill in her repertoire, this creative, versatile, and virtuoso performer hails from Seattle. Starting from the age of twelve Brittany has performed in award winning jazz ensembles throughout the U.S.A. and Europe. She has had the opportunity to perform with people such as Wynton Marsalis, Ernestine Anderson, Clark Terry, and Elysian Fields. As a young woman she continued jazz and philosophy studies at New York University under the mentorship of Stefon Harris. Since, Anjou has directed and composed for many of her own instrumental ensembles, including the Brittany Anjou Trio, the LARCENY Chamber Orchestra, Bi TYRANT, Ghanaian Gyil Gala with Alfred Kpebsaane, and BEWAA, a series of ensembles incorporating Ghanaian xylophone. Recently she was a key support musician in the revival of 1960s all-girl outsider music band, The Shaggs, and supported Dot Wiggin in the studio and live while recording her 2013 solo album. Brittany performs actively with many artists and musicians throughout New York City and has toured throughout the US, Europe, Middle East and Africa. Anjou is currently working on releasing three albums: a 1960's style jazz piano trio album of originals entitled Enamiĝo Reciprokataj (Esperanto for “Reciprocal Love”), an avant-gyil album titled Nong Voru (“Fake Love” in Dagara) with Ghanaian master xylophonist Alfred Kpebsaane, and original music for a series of poems by Kuwaiti women entitled Astamaea (Arabic for “Listen”)

”The eclectic Brittany Anjou, a very gifted pianist with a classical imprint, whose compositions for the percussive use of the instrument recall some of McCoy Tyner's and the Blue Note school of the sixties. Accompanied by the drummer Shirazette Tinnin, and Umberto Lepore on the double bass, Brittany proposes a convincing live set.” - Pietro Previti, Magazini Inexistenti, Italy

“Hers is a music about music, a jazz about jazz.” – Charles Mudede, The Stranger, Seattle

”A technical mastery that harmonizes the tragic carnival in the sound and music by Brittany Anjou.” - Pierre Abi Saab, Al Akhbar / Lebanese Daily

Reciprokataj I: Cyrene (Flight Of The Butterfly) 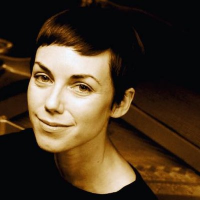 All About Jazz musician pages are maintained by musicians, publicists and trusted members like you. Interested? Tell us why you would like to improve the Brittany Anjou musician page.