By Mark Corroto
November 9, 2015
Sign in to view read count 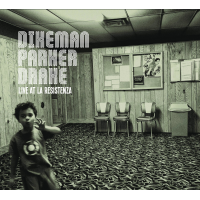 The subtitle to Charles Mingus' composition "Gunslinging Bird" is "If Charlie Parker was a gunslinger, there'd be a whole lot of dead copycats," refers to the great alto saxophonist's ability to dominate a bandstand and quiet any and all comers. Parker, who died in 1955, might not have known about automatic weapons, nor the free jazz revolution which was to come in the following decade, but he certainly would appreciate a machine gunner like saxophonist John Dikeman.

For many Live At La Resistenza with bassist William Parker and drummer Hamid Drake will be be a coming out party for the saxophonist. If that is so, you've missed his fine performances in the bands Cactus Truck and Universal Indians. The latter outfit recently released Skullduggery (Clean Feed, 2015) with Joe McPhee. Dikeman, an American living in Amsterdam, formed Cactus Truck with Jasper Stadhouders and Onno Govaert to create a kind of free jazz hardcore music not heard since John Zorn's collaboration with Japanese musicians in the 1990s.

This session, recorded in Ghent in May 2014, is bookended by a London performance at Cafe Oto (available as a digital download from Otoruku) the same month. His choice of Parker and Drake suggests a philosophical connection to Peter Brötzmann, who the pair have recorded with in trio and large ensemble. Plus, they've also collaborated in trio with Kidd Jordan, Fred Anderson, Jemeel Moondoc, and Daniel Carter.

Dikeman is in good hands here, although he certainly needs no handlers. He opens the set with a bluesy drunkenness, aiming his saxophone toward the energy center of Parker's bass. He plays with the energy of Brotzmann, but is more tuneful. The four pieces here melt into each other with plenty of space for each player to be heard. Parker and Drake are so familiar with each other's sound that they naturally fall into a rhythm. Drake's patterns constantly shift time and tempo, forcing the pace on "Invocation," then backing off. Dikeman takes the shifts without panic; guided by his partners he slices off chunks of explosive sound that often resolve into a gentleman's agreement of sound.