By Hrayr Attarian
November 9, 2015
Sign in to view read count 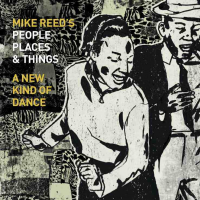 As a drummer, promoter and composer Mike Reed is a standard bearer for Chicago's creative music scene. His club Constellation is a hot bed for improvisation and innovation that often defy narrow genre-isms. His unique musicianship, meanwhile, is on display on his many recordings particularly ones with his groups; People, Places and Things and Loose Assembly.

The intriguing A New Kind of Dance is his tenth album as a leader and the sixth with People Places and Things. On it Reed and his band explore various motifs with unfettered spontaneity and anchor their imaginative flights of fancy with earthy, hypnotic beats.

The traditional Bulgarian song "Markovsko Horo" has a dramatic ambience with guest trumpeter Marquis Hill exchanging lyrical lines with the rest of the ensemble. Slowly this warm undulating conversation transforms into a heady, whirling and passionate dance with Reed accelerating the tempo with his rumble.

Ward's muscular alto wails over the stormy rhythmic vamps on the darkly hued and blues tinged "Fear No Man." Pianist Matthew Shipp joins Reed and Roebke as the trio exchanges haunting refrains with the saxophonists. Shipp exhibits his sublime pianism with an imaginative and angular performance replete with crystalline tones and a contemplative edge. Haldeman echoes Ward with his fiery, ardent tenor.

Reed's own "Jackie's Tune" opens with Haldeman and Ward conversing unaccompanied and with delightful atonality. With the entry of the other musicians an infectious sense of swing permeates the piece. Shipp's shimmering and resonant solo evolves with pensive and subtly acerbic flair. Roebeke takes center stage with an agile and lithe performance built with crisp, clever expressions.

Haldeman channels his inner Albert Ayler with a riotous and honking monologue on the energetic "Candyland." This Reed original sways between free flowing and fervent dissonance to a hard boppish swagger with the leader's thundering polyrhythms driving the music.

This cohesive and riveting record documents another stage in Reed's creative evolution. With each installment his abilities as a consummate musician refine and mature. A New Kind of Dance provokes and simultaneously thrills satisfying both mind and spirit.