By MARK CORROTO
September 26, 2019
Sign in to view read count 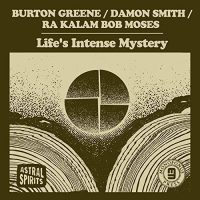 Let's give credit to whomever assembled this swinging free-improvisation trio. Sometimes, no, invariably, all great improvised music results from the reciprocal nature of the musicians: not something done in response to another (although it can be) but by some subconscious agreement made by the players. A fine example is Life's Intense Mystery by the trio of pianist Burton Greene, bassist Damon Smith and drummer Ra Kalam Bob Moses.

Although the bassist recorded with Moses on Astral Plane Crash (Balance Point Acoustics, 2018) (along with Vinny Golia, Henry Kaiser and Weasel Walter) this outing is the first recording by the trio. Smith was probably the driving force for the gig because unlike the bassist, we don't get much new music from Burton and Moses these days. Maybe Smith had the thought, "why don't we hear more from these masters?"

Neither needs an introduction. Burton whose career was essentially born in the free jazz milieu of the 1960s has performed with everyone from Albert Ayler, Cecil Taylor and Archie Shepp to Gato Barbieri. Likewise Moses cut his teeth with Rahsaan Roland Kirk and collaborated with Larry Coryell, Dave Liebman and Gary Burton. His preference for pulse and swing is evident here, but he also stretches to accommodate his free improvisation partners. Recorded in one long set, the tracks are divided by the change in atmospheric pressure of the performance. Parts I-III of "Life's Intense Mystery," although split between the opening and closing of the disc, are free formed with multiple changes and what sounds like mini-demos of dazzling technique. The give-and-take here is the barter and exchange between pulse and freedom.

Two tracks shed the seriousness for some levity. Both "Anything That Ain't Yes, Get Rid Of It!" and "Kid Play" could be mistaken for a bit of New Dutch Swing à la Misha Mengelberg, Han Bennink and, well, Damon Smith. There's a bit of Thelonious Monk mischief, some patriotic marches and cartoon flourishes. Whether serious or silly, this is some imaginative music making.