By Jim Worsley
September 26, 2019
Sign in to view read count 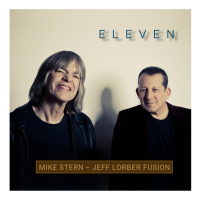 Eleven is a record co-led by fusion giants Mike Stern and Jeff Lorber. It features ten songs (Stern laughingly stated that he never was very good at math) which are a mix of originals and reworked vintage. Stern was also quoted as saying that he and Lorber are from "different orbits." One thing they do have in common is their highly melodic songwriting sensibilities. Having fun merging their sounds was the focus of this project. The other constant on the record is bassist Jimmy Haslip. Drummers Dave Weckl, Vinnie Colaiuta and Gary Novak all make strong contributions.

The Lorber original "Righteous" kicks off the record in a bright and bouncy manner. Big horns energize this most engaging piece. Dave Mann's horn playing and diverse arrangements prove to be an integral part of this record's invigorating sound. An imaginative Stern original called "Nu-Som" follows, and features Stern's signature guitar voyage in a different light. Joined by Leni Stern on an African ngoni, the hypnotic tune has a polished finish as Lorber eloquently finds and echoes Stern's groove. Stern then reaches back to 1997 for the sophisticated "Jones Street." The version from Give and Take (Atlantic, 1997) has a mesmeric blues feel, later fortified by a penetrating Michael Brecker sax solo. This reimagined take cranks up the intensity and is fueled by Weckl's dynamic drumming. Stern's mighty chops are buoyed by Lorber's nifty pacing. Lorber then intertwines Stern and the big horns while bopping through "Motor City." Handsome solos from Stern and Lorber are delivered in this Lorber-penned song; it is perhaps the tune that best meshes their sounds. Co-written by Haslip, Lorber also contributes the steady grooved "Big Town" to the mix with stylish keyboards. Stern comes in late to punch it home with authority. From Stern's Voices (Atlantic, 2001), the graceful "Slow Change" is now a heavier epic in which Lorber's Hammond B3 is as densely provocative as Stern's blissfully laced cuttings. The one ballad on the record is "Tell Me." Stern's poetically designed and timeless piece from Between the Lines (Atlantic, 1996) once had Stern delicately staying in lines provided by saxophonist Bob Malach. Stern now balances with Lorber's Bruce Hornsby-like keys instead. It is more than a subtle change as Lorber's take is a reinvention that comes from a more modern perspective. "Ha Ha Hotel" is given all new treatment. The high-energy hard-edged classic from Is What It Is (Atlantic, 1994), now has Lorber and the big horns kicking it out and setting up a furious pace for Stern's ambitious and lightning-bolt guitar work. Driven by Weckl and the horns, Stern cuts loose like nobody's business. Lorber joins in on the fun, smokin' on his B3. In simple terms, it could be referred to as the kick-ass piece of the record. The journey doesn't slow down with Colaiuta animating the spicy "Rhumba Pagan." Lorber and Mann's clever horn arrangements, aligned with Stern's guitar effects make Lorber's tune rival "Motor City" as the most seamless union of their styles. Kudos to Haslip for his funky-grooved bass line. Haslip is also part of 3-piece melodic vocal harmony with Stern and singer Chelsea Maull. The Lorber juggernaut "Runner" then serves up a tasty odd time signature which features the stalwart and brilliant efforts of the Haslip/Novak rhythm section. Stern's flourishing and effervescent guitar riffs bring the song and the record to a powerful conclusion.

All-star bands or big names coming together generally bring excitement and, along with it, expectations. Much of the time they fall short. Sometimes the expectations may be too high. Sometimes they just don't click, or there isn't as much space as an artist is accustomed to having. This union is significant in just how well it does work. Stern and Lorber both maintain their own identities and, at the same time, venture into each other's worlds with notable success. It is a record that utilizes a purposeful scope of ideas, seems to spend just the right amount of time in or on each one and, in the end, is a distinctive blend of challenge and orbital symmetry. Oh, and for the record (no pun intended) the title Eleven is actually a nod to a reference made in the 1984 movie This Is Spinal Tap, the joke being that their amplifier's volume knob went to eleven, "for when you need that extra push over the cliff."