A fine drummer, Bob Moses has received his strongest recognition as a colorful and adventurous arranger/composer for large ensembles. He played as a teenager with Rahsaan Roland Kirk (1964- 1965), formed the early fusion group Free Spirits with Larry Coryell (1966), and toured with Gary Burton's quartet (1967-1969). Moses collaborated with Dave Liebman in the trio Open Sky, recorded with Gary Burton in the mid- '70s, and worked with Jack DeJohnette's Compost, Pat Metheny (recording Bright Size Life), Mike Gibbs, Hal Galper, Gil Goldstein, Steve Swallow, the Steve Kuhn/Sheila Jordan group (1979-1982), George Gruntz's Concert Jazz Band, and Emily Remler (1983-1984). He recorded as a composer for his own Mozown label in 1975, but Moses' reputation as a writer rests primarily with his Gramavision releases, especially When Elephants Dream of Music (1982), Visit With the Great Spirit (1983), and 1994's Time Stood Still 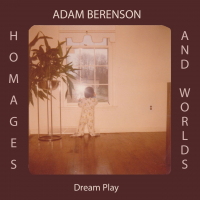 Label: Dream Play Records
Released: 2021
Track listing: CD1: Ideology is Consciousness; The Desert; Before it Died (it gave us the code); Sinthome; Majestic Desolation; Fernando Pessoa; Anxiety Dream; Can You See Your Puppet Strings?; Catacombs; Shadows of What it is Not. CD2: The Elusive Ground of Reason (glimpsed in the gesture of its withdrawal); Rachel Carson; The Disinterested Loan and Life Assurance Company; Pit of Acheron; Demotic Rhythms; The Phantasmatic Frame; The Ecclesiastical Fashion Show; The Ninth Amendment; Satyagraha; Guide From Beyond (for Stefano Battaglia).

Live at the Berlin Philharmonic, 1977

Keyboardist and composer Adam Berenson has at his disposal an arsenal of instruments, electronics, synthesizers, etc. But to hear him in the traditional acoustic piano trio setting is immensely enjoyable, while hardly “traditional." On the double-disc Assemblages, Berenson puts aside his Korg Triton Extreme, Yamaha Symphonic Ensemble and other impressively named and plugged-in instruments in favour ...