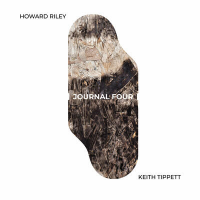 British pianists Howard Riley and Keith Tippett were seasoned proponents of the never widespread format of the piano duet, both together and apart. Riley's partners also included Jaki Byard as well as overdubbed sessions with himself, while Tippett's discography contains entries with Stan Tracey, Daryl Runswick and Matthew Bourne (though the last took place subsequent to this 2016 concert at Soho's Pizza Express). Journal Four is indeed their fourth and, sadly, final, record documenting what proved a fertile and enduring joint venture since First Encounter (Jazzprint, 1981), although paradoxically each was more than complete in itself.

Since hailing from Huddersfield in 1943, Riley has trodden a wide-ranging path, from the pioneering trios featuring bassist Barry Guy—which extended yet further the egalitarian template first established by Bill Evans and Paul Bley—to a plethora of unaccompanied dates, to small groups with reedmen Elton Dean and Lol Coxhill, coming full circle as soloist with Guy's London Jazz Composers Orchestra. What distinguishes his work is a keen intelligence and an orchestral conception, even when in the spotlight alone. Tragically Parkinson's Disease has since stilled this unique voice.

Tippett, who died in June 2020 aged 72, had an illustrious career spanning over 40 years. His achievements range from madcap flourishes on seminal King Crimson albums, to leading the legendary Centipede, to free improvising with the cooperative trio Ovary Lodge, and latterly alongside reedmaster Paul Dunmall in the superlative outfit Mujician. But as the decades passed, his deeply personal piano sound, partly defined by his early adoption of spontaneous preparations such as woodblocks, pebbles and metal bars, was perhaps best appreciated in intimate settings such as this.

The album presents short solo sets by each man which serve as stylistic primers for the 46-minute title track. Tippett's "Sea Walk" constitutes one of the highlights. He juxtaposes the prepared and unprepared sections of the keyboard, at times to electrifying effect, suggesting a meeting between two particularly imaginative pianists, who reprise melodies extemporized or composed including his own elegiac "Dedicated To Mingus," and flit between rolling vamps and music box sonorities, as if following some fruitful inner logic. Riley's "Misteriously / Round Midnight," as its title alludes, references Thelonious Monk themes as part of a richly voiced, lyrical unfurling which also possesses more than a touch of melancholy.

Together they make a complementary pairing, with common roots in the jazz tradition which occasionally bubble up to the surface to anchor passages less amenable to categorization. Largely consonant and maintaining some sort of time, both play for virtually the entire duration, one frequently holding down a rhythmic pattern as the other embellishes, in a kaleidoscopic restlessly evolving flow.

One notable sequence arrives about half way through when Tippett evokes South African kwela, reminiscent of Abdullah Ibrahim or more pertinently those exiles such as Dudu Pukwana and Mongezi Feza who made London their home during the '70s. Surprisingly that refrain then takes on a distinctly Country & Western air when he modulates the piano strings into sounding a banjo twang. Although often more oblique, Riley also introduces a tune just before the close, as the familiar intervals of Monk's "Misterioso" ring out, garnished with aplomb by Tippett. It creates a pleasing full stop to cap an inventive and accessible performance.