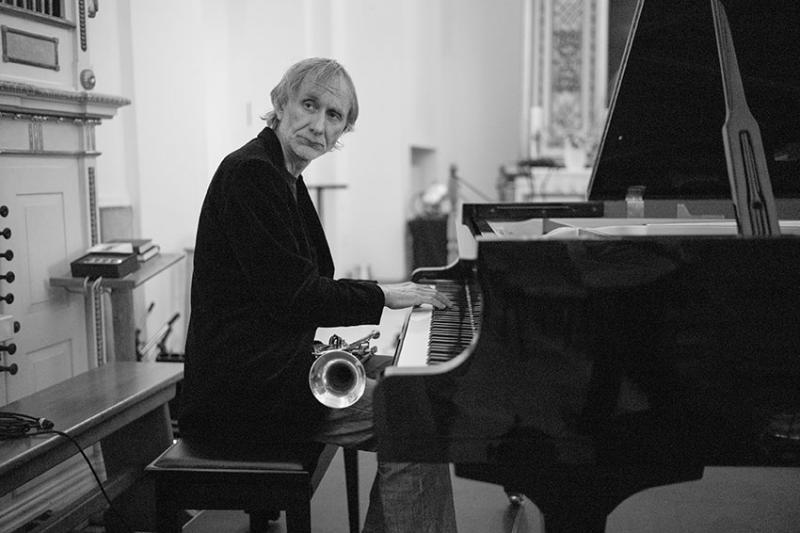 The Jazz in Church Festival reaffirmed its call of unconventionality by bringing together artists of most diversified styles and orientations. A subtly assorted lineup consolidated the nascent tradition of open dialog and transgender interplay set forth three years ago. For four days in April the cupola of the Lutheran Church in Bucharest echoed with the unobstructed creativity of the performers and reverberated with the high emotional energy of the performances in a true celebration of improvised music.

Rainer Bruninghaus opened the festival with a piano solo suite made up of his own compositions combined with old jazz tunes in which his conceptual approach was toned down by the right amount of dreaminess. His firm grip on the keys was backed by a submersed tinge of lyricism; the sober and collected scalar ascents built up to well-dosed tension peaks, tempered by harmonic alertness.

Large concerting roots amplified by a strong left hand achieved Baroque roundness; a nervous rustle of keys alternating with wide-paced intervals of rest became a balanced journey among the pearlescent clouds in rosy hues of gray. The tunes floated away carried by the warm air currents into a harmonic whirl that mingled the colors and scents of spring. Intensified by the direct key attacks, the melody rose in a jubilant arch, floated diaphanously, and was then brought to an abrupt, suspended end.

A clarinet solo with Gershwin inflections opened the show of Urlich Drechsler on bass clarinet, and Christoph Cech, piano, on a note of bright melodiousness. The piano joined in finely measured intervals of solitude creating a fluid conjunction with the floating clarinet line. The piano solo rose then with crystalline clarity, harmonized by the grave airflow of the clarinet, emerging into a grave serenade with dramatic heights and diaphanous lulls.

The sober piano line, acquiring a new rhythmical dimension through the energetic left hand sustenance moved in direct complementarity with the melodiousness of the bass clarinet, mellow yet full of vigor. The growing harmonic interaction of the instrumental lines resulted in a journey into large fields of waving green and yellow with round isles of deep red bending in the gentle breeze.

A subtle waltz with a romantic touch dedicated to Drechsler's two sons became a progressive sequencing intensified by modular alternations, a lullaby with tempo largeness transgressed the dream territory with large breaths of peacefulness. "Your Paradise," a piece written by Drechsler for Tord Gustavsen, set out in sax mode with the right ingredients of joyfulness and passion, receding then in a calm solemnity, that became first a whisper, then a sigh.

On the second night, from the beginning of Nils Petter Molvaer's show, as the first sounds filtered by his trumpet became music, a faint golden ray started pouring out of a thin sliver of light at the horizon. As the melodic air flux gained electronic intensity the gray strips of sky became tinged with pink and mauve. A ripple of rising waves flooded the sonic landscape bringing in the light sea breeze and the taste of salt. A fine profusion of trumpet sounds was touching the surface and diminishing again in a torrent of beats.

The amplified sound releases the sound of voices mingled with whirls of tone and a faint rhythmical fluster that grew into an accelerated groove. The trumpet joined the beat creating a perfectly balanced contrast between the raw alertness and the large melodic folds opening into a serene instrumental soliloquy.

The theme -a meditation, a chant, and a prayer -unfolding in wide sheets of white and curls of green poured out of the fluid harmonic fabric with the suggestive expressiveness of a stellar pursuit. From wide tides of silence the dormant beat was waking into a rhythmical frenzy out of which the trumpet rose like the solitary call of a late bird. As it departed the song left behind a transparent sound cloud gradually absorbed by narrowing sliver of light narrowing in the distant darkening horizon.

Eivind Aarset on guitar and electronics, together with Michele Rabbia on drums and percussion, closed the second day of the festival with a show of exquisite instrumental virtuosity unfolding as a sensuous, trance inductive narrative with strong suggestive power.

Subtle sound ripples were coagulating the acoustic energy of the room into crystalline vibrations that lingered for a while, relapsing again into a deep instant of silence. The elongated riffs descended into dense liquid depths to surface again in a fluid graduation of implosive drum rolls. A primeval tumult with organic twinges was emerging from the waters, taking form out of chaos and issuing the harmony out of rhythmical shreds.

The sampled sound floating asunder in minute spheres was reconfigured into aerial rhythm pyramids joined then by the distant reverbs of the guitar, echoing the sorrowful wail of the duduk. Serial impulses were translated into effects of spectacular immediateness, provided by the scratching of tinfoil or the crumpling of scotch tape, to become later the melodic hum of an airplane vanishing in the deep blue.

As the reverbed resonance of the string taps intensified, acquiring the menacing energy of a waking volcano, the subdued tension was released into a fluorescence of beats measuring the jubilant guitar riffs vibrating with the fierceness of a siege, the joy of a victory, and the quiet solemnity of a revelation.

Louis Sclavis on bass clarinet and Benjamin Moussay on piano brought to the Lutheran Church in Bucharest an intellectual show of classical touch that developed a subtle, rarefied, yet warm melodic radiation. A show of virtuous but flexible instrumental mastery, introspective, yet forceful.

Out of the intricate harmonic confluence, marked rhythmically by the piano keys, the bass clarinet line rose aloft in light serpentines towards the gilted dome. Percussion beats on the clarinet keys marked the intervals of a finely wrought tension arch.

Through the natural harmonization of the instrumental lines he show of trumpet player Erik Truffaz together with pianist Benoit Corboz took the form of a serene, organic dialogue inducing a state of pure musicality with jovial rhythmical sustenance and discretely controlled alertness.

The trumpet opened with a morning tune recalling the remnants of a dream in soft tones of distant birdcalls and the swish of satin. The mood progressed into brisk alertness induced by the piano lyrical introduction, like a day launched in its succession of predictable acts, to develop -through the sensuous architecture of the trumpet line -into a memorable experience full of joy, passion and drama. In long lingering lines the piano concluded the day with dour touches of weariness.

The tender groove was carried into the second piece by the low keys, which were taking over the bass function. The clear undulating trumpet line soaring with the calmness and fluidity of phrasing brought into the charmed nave of the church in Bucharest the spiritual freshness of Spring. On a late night, the wind was caressing the budding branches and the petals started dancing in the quiet whirls of a white rhapsody.

The piano launched a tender adagio in minor while the trumpet line rose like a dream recalling a long forgotten memory. Moments of bliss, times of longing and years of regret were evoked in diminishing piano touches and in long rising trumpet tones of velvet and ash.

Mihai Iordache on sax together with Ghassan Bouz on percussion opened the last day of the festival with a short, vigorous number in which the firm, tall tone of the sax with finely nuanced lyrical inlays met the inspired rhythm variations of the percussion. The result was a lively alternation of sobriety and tenderness based on the tones of the East. The traditional Romanian flute fluier called on ancient shepherd traditions, with long modulated Romanian motives, embossed in the Oriental rhythm of the cajón. Transparent hues of veiled dances in pale tones of green and blue were enveloping the melodious themes in a languid, tender swing.

Clarinetist Gianluigi Trovesi described his concert together with accordionist Gianni Coscia as a carousel turning around the Mediterranean soundscape while crossing time and cultures and styles. The joy of playing of the two musicians, paired by a good dose of humor, resulted in a show with spectacular musical and dramatic effects attained with admirable minimalism.

The clarinet's roundness of sound, its smooth clarity, was enhanced by the energetic alternating of registers and moods while the accordion was following its line with controlled nostalgia like a light breeze. The traditional sound, filtered through a perfect economy of expression, brought the art of pianissimo to its most accomplished form. Light touches of keys exploring the sound of silence produced a restful melody reminding of a late summer night when the party is over and the guests, too tired to go home, are lingering in the memory of a perfect day.

The show closed with a 16th century theme adapted by Trovesi in the dulcid tones of the clarinet piccolo followed by the accordion in a harmonic hue. The gliding tones were picked up again by the clarinet in small ascendant intervals, departing in the turns of an ancient dance.

The pianist Aki Takase and Alexander von Schlippenbach closed the festival with a spectacular "tour de force." The double performance, with Schlippenbach playing the lower keys, became, a gender musical dialogue of genders carried out with energy and passion in nervous interaction, united by polyphonic depths and balanced internal growth.

In powerful yet controlled strokes Aki Takase opened the set with a direct plunge into the eye of a sound storm, which was then gradually tamed to a conceptual, still highly energetic performance with a strong bass resonance. Through the spectacular alternation of techniques and moods performed with full force, Duke Ellington standards became explosive hits sustained by a solid inner balance.

Alexander von Schlippenbach's sober performance, of similar energetic emanation, started with a vertical plunge on the keys, which brought an additional implosive effect to Thelonious Monk and Kenny Wheeler themes. The rapid key fulgurations and deep percussion effects of a light rain on the roof developed into pulsing rhythmical patterns, and plunged into the harmonic flux, which accruing melodiousness became fluid, liquefying then into airy intervals of silence.