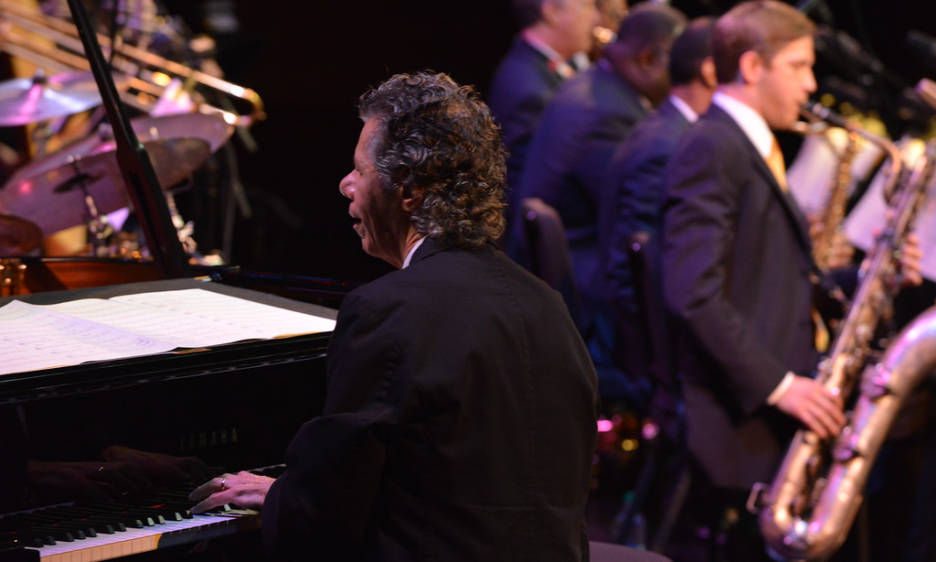 In the words of Robin Kelley, Thelonious Monk's definitive biographer, Monk was "An American Original," meaning that he was both one of a kind and contributor to an evolving tradition. This impossible-to-resolve paradox of Monk affects any attempt to perform his music with his unique inflections. No matter what you do, it always comes out as soup.

You can make a good soup in two ways. You can take some great leftovers from your fridge and add some broth and spices to make a satisfying stew. Or you can take one or two carefully selected fresh ingredients, blend them together precisely, cook them slowly over a low flame, and create a consommé or bisque worthy of a gourmand. This concert, which consisted of a big band testimonial to Monk's music was clearly of the first kind. It was a delicious, hearty mix of everything in the kitchen with a liberal dose of "Thelonious the Onliest" (the title of a tune by J.J. Johnson) thrown in for good measure.

How could it be anything else? If you bring together a unique, creative pianist with Latin roots like Chick Corea with a band like the Jazz at Lincoln Center Orchestra whose leader, Wynton Marsalis came up from the depths of New Orleans, Swing, and the Ellingtonian legacy, to honor a composer who created a unique blend of stride piano with bebop and hard bop, you're going to get an interesting mix of ingredients. But by the same token, to ask these diverse musicians to provide a consistent interpretation of a master's approach, well, it was not meant to be, nor should it be expected. What they did deliver was a heady evening of musical energy and ingenuity by monkeying around gloriously with the contributions of a latter-day saint of jazz. Part of what empowers jazz consists of dancing on the graves of the past masters.

This knightly feast of stew was established from the beginning with a swing-band solo by Marsalis in Monk's "Four in One" as arranged by Chuck Israels, who served as bassist in one of Bill Evans' trios. So you already had a mix of styles, and it was not until Corea's solo that you could hear Monk's famous stride-based syncopation clearly stated. Most of the subsequent arrangements were by members of the band, for example, alto saxophonist Ted Nash, whose version of "Think of One" could have come out of a Count Basie playbook with some tasty nuggets of Monk added. Trombonist Vincent Gardner's arrangement of a little known Monk tune, "Light Blue" was stunningly reflective of Duke Ellington and Billy Strayhorn's extended compositions like Black and Tan Fantasy and The (Harlem) Nutcracker Suite. Next, trombonist Chris Crenshaw's setting of "Hackensack" smoothly integrated Monk with classic swing, allowing for impressive soloing by tenor saxophonist Walter Blanding.

With the Monk tune, "Baya" (arranged by bassist Carlos Henrriquez), chards of Monk's "eccentricity" began to appear, especially in an "in the zone" piano-bass interchange between Henriquez and Corea that captured the creative interaction that Monk was aiming for in his own groups.

Following the intermission, the band seemed to latch on more consistently to the Monk idiom. Alto saxophonist Victor Gaines' arrangement of "Trinkle Tinkle" had a genuine Monk flavor, and Marsalis caught wind of it with a rapid-fire trumpet solo that grabbed everyone's attention. The most harmonically advanced solos of the evening were delivered by Corea and by trombonist Elliot Mason in Cranshaw's version of "Epistrophy." Generally speaking the music in the second half of the concert was more Monk-ish and lively than the first. Corea's "head" arrangement of a tune called "Work," left ample room for great solos and exchanges by himself, trombonist Mason, and bassist Henriquez.

Monk wrote beautiful ballads such as "Round Midnight" and "Ask Me Now" that are not in the least eccentric. Blanding arranged the latter perfectly for the Lincoln Center band, and baritone saxophonist Paul Nedzela soloed magnificently with a "bari" tone to die for. This concert honoring Monk ultimately proved to be a great vehicle and showcase for these exceptional musicians' improvising and arranging capabilities.

The show concluded with a rip-roaring performance of "Rhythm-aning" with a carefully crafted alto saxophone solo by Alexa Tarantino, who was joined by Blanding to end the festivities with a rich display of virtuosity. Marsalis proudly identified all the musicians and, after such an exhausting run, no one expected an encore.

But then something happened that is rare in a concert hall, living proof of Yogi Berra's quip, "It isn't over 'til it's over." There was a standing ovation, the band exited the stage, people began moving along the aisles and started to leave. The night seemed over, but for some reason the applause suddenly escalated and persisted. After what seemed like a lifetime, the band came out for an encore! (They did a tune called "Stuffy Turkey," that is rarely performed but fits the gastronomical analogy used in this review.)

The delayed upsurge of enthusiasm was a crowd event that happens only when an audience has been mesmerized. And indeed there was something hypnotic about this show. It was the combination of the belly-filling "stew" of music, the magical power of the band, and the captivating presence of the legendary Corea that seemed to do it. Add to this the fact that the concert was held at the Academy of Music, where on June 5, 1945 jazz history was changed forever when two aspiring young men, John Coltrane and Benny Golson, came there to hear Charlie Parker and Dizzy Gillespie introduce bebop to Philadelphia on the very same stage.

Photo: Courtesy of the Kimmel Center for the Performing Arts