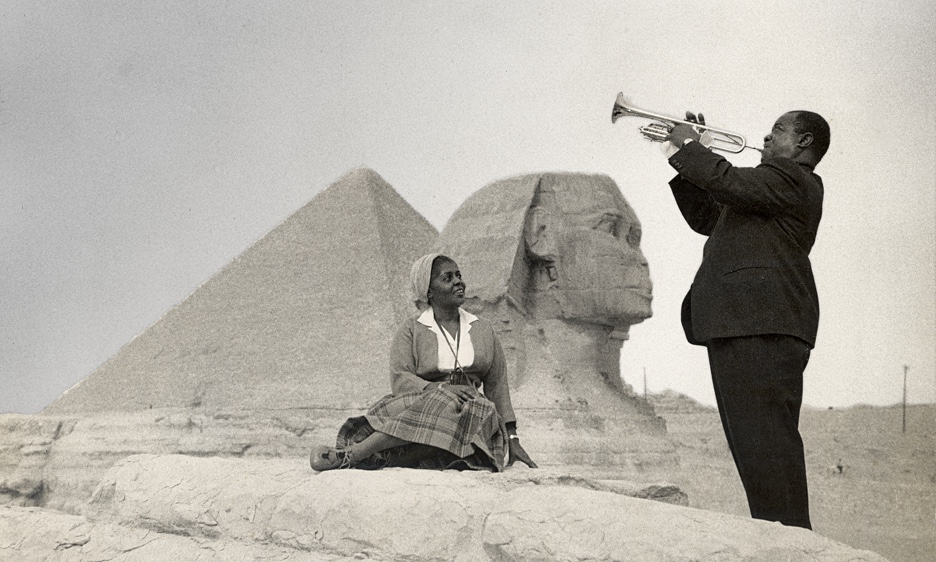 Here, long overdue, is a comprehensive documentary about the legendary jazz musicians in the 1950s who served as "cultural ambassadors" under the aegis of the U.S. State Department, touring Europe, Asia, Africa, and the Soviet Union. The film comes sixty years after the fact. As Americans continue to mourn the loss of Tom Brokaw's "Greatest Generation" of WW II soldiers and their families, we jazz fans also grieve the passing of the "greatest generation" of jazz musicians who came up in the same era or shortly afterwards. As jazz fans in the New Millenium recall and reflect on the great ones of the past, there have recently been several biopics about icons like Miles Davis, Lee Morgan, Chet Baker, John Coltrane, and others. This new fillm, however, is not a biopic, but rather a documentary about a group of "greatest generation" jazz musicians, including of course African Americans, who supported America when America was not supporting them.

As one of the major developments during the post-war period, the Jazz Ambassador Program sponsored by the U.S. State Department featured worldwide performances by famous names like Louis Armstrong, Duke Ellington, Dizzy Gillespie, Dave Brubeck, and Benny Goodman. It was initiated by Senator Adam Clayton Powell, Jr. of Harlem, whose wife Hazel Scott was a prominent pianist and singer. One of the great historical contributions of jazz musicians of the 1950s was to bring this uniquely American form of music to the world as a way of breaking the ice of the Cold War. A thoughtful documentary about the Jazz Ambassadors is a well-timed reflection on the cultural history of that era.

Newsreels, TV, and other media of the time provided ample witness to the American public of the jazz ambassadorship tours. Thus, there still exists considerable film and video footage about their journeys. Director Hugo Berkeley has woven together these memorable film clips with vivid and thoughtful narratives by musicians and historians to tell the story as it unfolded in real time in its historical and political context. While evoking memories and feelings about the key figures in the story, Berkeley adhered carefully to the events as they unfolded, avoiding false sentimentality. Such a disciplined approach risks becoming academic, strictly presenting and analyzing the facts, but the newsreel footage and the personalities of the protagonists and narrators convey the emotional power and significance inherent in the story. Of the many narrations, especially compelling are those of Quincy Jones, who as a young man was thrilled to serve as musical arranger for Gillespie's tour, and Robin Kelley, representing the current generation of African American scholars, who gives a rich depiction of the ways in which the ambassadorship fit into the history of a long suffering people determined to become a part of, rather than apart from, the country and world in which they lived.

The thematic thread that propels the film is the musicians' deep-seated conflict about presenting America's music—which came directly out of the black communities -to the world as pro-U.S. propaganda during a time of racial segregation and violent acts that went unchallenged by the very government which they represented. Gillespie, Ellington, and Armstrong in particular were outspoken about their opposition to segregation, supporting the budding Civil Rights movement. Armstrong's participation was especially poignant. His independent tour of West Africa, which attracted huge audiences, provided a stimulus for the Jazz Ambassador program. He initially refused to come on board with the State Department, but finally relented and began a successful tour of Russia. But when he found out about the school integration crisis in Little Rock, Arkansas and then President Eisenhower's refusal to protect the students, he ended the tour. The film shows interviews in which Armstrong, visibly hurt and angry, condemns Ike's refusal to act on behalf of the students. It's a serious political side of Armstrong that he rarely if ever showed on stage. The film is unflinching in suggesting that the government's hypocrisy stood in stark contrast to the thrilling welcomes that the bands and their music received in all corners of the globe. As Gillespie's drummer, Charlie Persip, points out, the musicians came to think of the tours as an expression of the universality of their playing and rapport with the people rather than a patriotic effort to win friends for America.

The film also does a great service in giving a relatively unsung figure a significant place in jazz history. At the time, Willis Conover was the jazz DJ for the U.S. Information Agency's Voice of America radio station. His broadcasts brought jazz to the people in many countries, including those behind the Iron Curtain. He paved the way not only for the Jazz Ambassador program, but for the world-wide love of jazz that still today makes jazz an international phenomenon. Conover really appreciated the musicians, whom he often interviewed on air, and his gentlemanly attitude contributed to the respect that his listeners had for music many of them were hearing for the first time. In his own unassuming way, Conover changed the face of jazz by establishing trust and bringing it into homes around the world.

The film deftly moves between narration, musical moments, and historical footage. An especially moving scene shows Dave Brubeck ending a concert in Warsaw with a piece dedicated to Poland's great composer Chopin. The audience is silent and then erupts into thunderous applause. The joy they feel is a stunning tribute to the connection Brubeck made with them by this gesture. Another deeply touching moment occurs when a camera focuses in on Ghana liberator Kwami Nkrumah visibly moved by Louis Armstrong's performance of "Black and Blue," a song that expresses the feeling of being of a different skin color: "What did I do to be so black and blue?" It is remarkable to see how much communication beyond words went on between the musicians and audiences. The power of musical diplomacy is not to be underestimated. During the tours, the most specific and concrete "diplomatic" role of a band occurred when the State Department hastily set up a concert by Dizzy Gillespie in Athens, Greece to try to quell a rash of student Anti-American protests there. It worked! The students jammed the concert hall, and at the end rushed the stage to lift Gillespie into the air as a great hero! The protest subsided.

Jazz Ambassadors is a film that, by its historical and cultural perspectives, simplicity, and adherence to the facts, tells a story that needs to be told in the way it should be told-in a coherent array of music, film images, and intelligent commentary instead of the melodramatic hyperbole that close up the holes in so many jazz documentaries. Through this film, those old enough to remember those heady midcentury times in jazz and American life will feel as if they are there. Younger generations will hopefully become more aware of a time of awakening to freedom and justice and the important role of jazz in those historical moments. And perhaps younger audiences will begin to hear jazz not only as a stimulus to the senses but as an expression of hope for unity amid diversity in a world free of racism, prejudice, and retrogressive nationalistic interests.