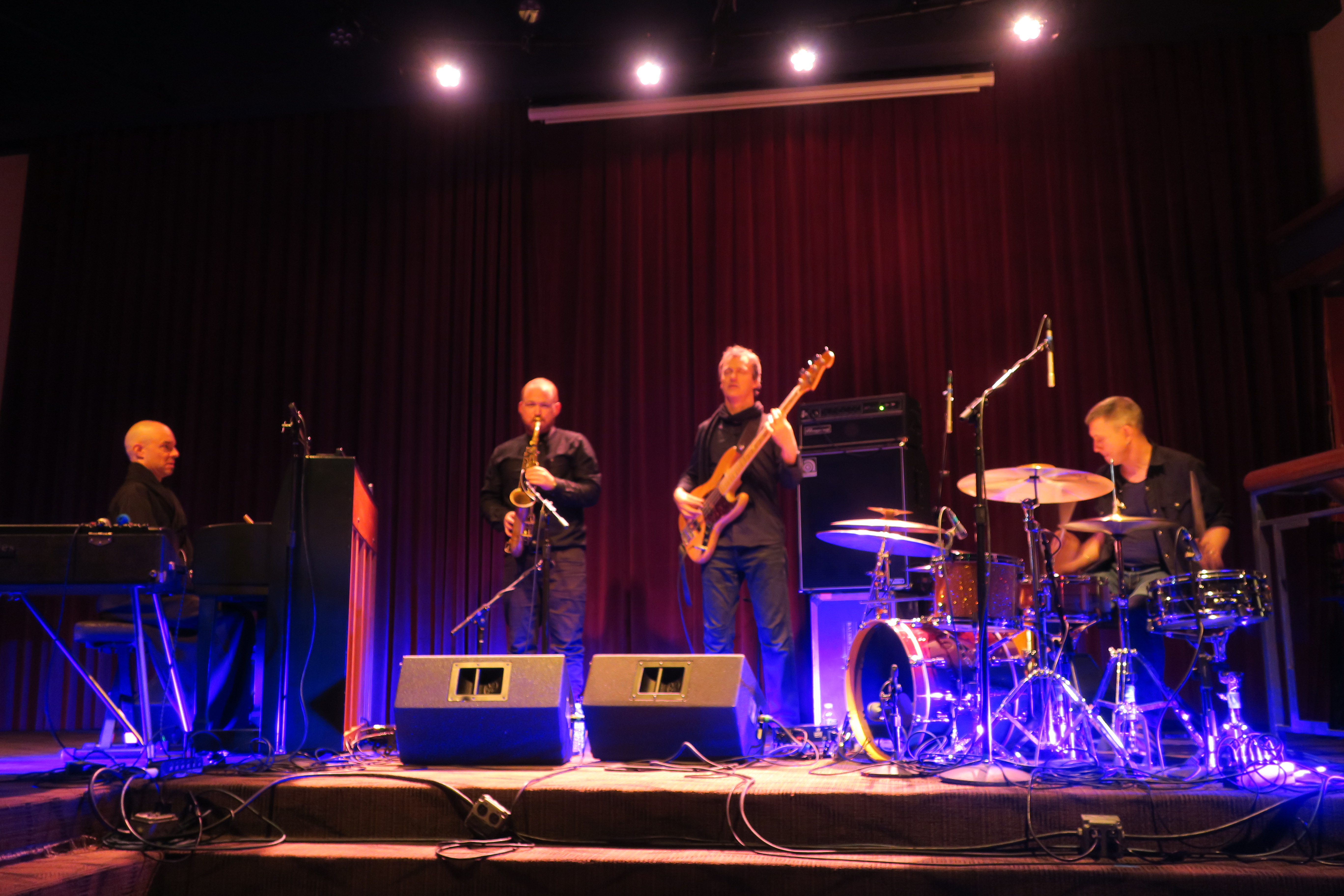 Of the oddest sights Philadelphia's art scene might offer on any given Tuesday night, a stern-faced figure in samurai hatama whacking a piano with a mallet should probably be in the top five. (Unless there's something like the Fringe Festival going on, in which case, maybe the top twenty.) To the unfamiliar, the music of Nik Bärtsch's Ronin may seem similarly odd and yet oddly compelling—an endlessly grooving kind of less-is-more jazz/funk balancing exciting spontaneity with masterful discipline. Unusual percussive sounds and all, it made for a whirlwind of a performance that was always mesmerizing and sometimes transcendent.

The audience in World Cafe Live's cozy upstairs room was somewhat disappointingly small for the band's long-awaited debut in the city, but they made up in heart what they lacked in numbers. A performance so irresistibly rhythmic inevitably meant some dancing off to the side, which was happily unself-conscious and carefree. Cheers and shouts of joy were plentiful at the right moments between songs. When a piece would drift to a simmer, the applause was often respectfully restrained to let the quieter segues cast their spell in something close to silence.

Appropriately enough, things started in sparse near-emptiness—the leader began a feather-light buildup at the piano until Sha's saxophone eased in light and slow. As Thomy Jordi interjected sporadic bits of bass, the easy drone congealed into the central hook of "Modul 58," the truly epic highlight of the just-released Awase (ECM, 2018). That title refers to moving together as a single organism, and Ronin lived up to it with elegance. From single piano notes and circular bass lines to Kaspar Rast's octopus-like polyrhythmic drumming, all the pieces locked together like parts in a high-functioning engine. They soon built to a small peak, then slightly backed off with Sha making sharp percussive-sounding breath noises as Bärtsch got out the mallets.

The band took several minutes to ramp up from that intro to a wild roiling churn, though the changes always happened so naturally you couldn't hear the join. The leader's joy was infectious as he switched between two-hand counterpoint piano runs and fuzzy electric keys, often juggling parts with the calm concentration of a monk, then suddenly cracking up or smiling ear to ear as someone took flight. Sha's piece "A" made a mid-set breather as they traded the shifting rhythms for a more static yet dynamic trance. Soon it led to another room-hushing segue with Bärtsch making plonky noises from the piano's interior strings, until they eased into the slowly-snowballing "Modul 36"—and where its studio recordings smolder, this one combusted and then exploded.

We could really do without that widespread tradition of briefly leaving the stage when everyone knows the show isn't over. Nobody was fooled when the band walked off after barely an hour; in mere moments they were back for another 35 minutes of chamber-trance and James Brown funk that left everyone jumping to their feet. For a surprisingly straightforward touch, the last stretch actually combined the precise interlocking grooves with some honest-to-God solos. Bärtsch's electric piano dueled with some nimbly solid riffing from Jordi's bass. They and Sha each got a space to step out and wail—though, as always, they managed it without a hint of flash or ego.

Above all it was a communal experience: while some people join together by attending sports games or going to church, Ronin finds spiritual oneness through creating something beautiful as a one-of-a-kind musical unit. It was a magnificent experience, challengingly smart, beautifully accessible and exhilarating to behold.