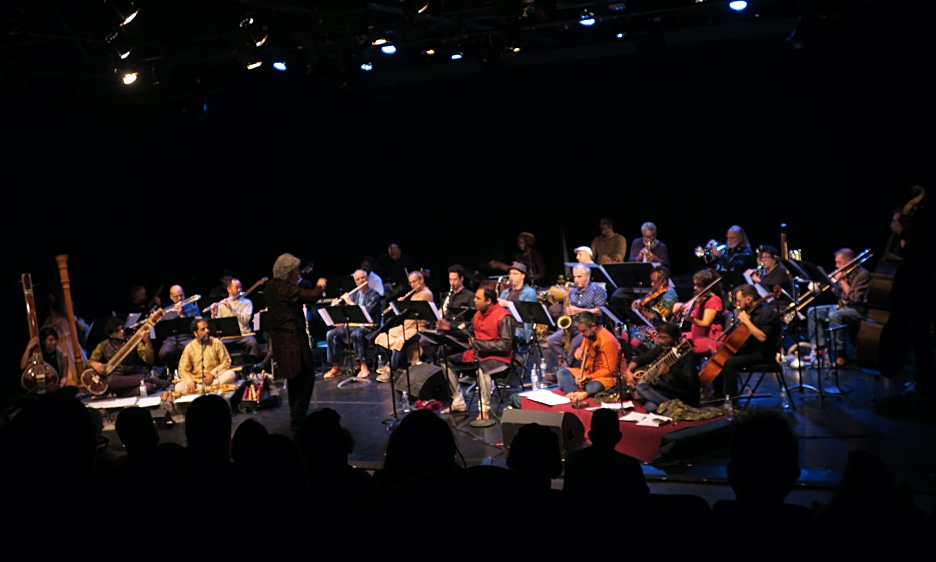 While Philadelphia's Painted Bride Art Center has been presenting jazz, improvised and/or experimental music for half a century, it's still entirely possible this was the most sweepingly wide, boundary-defying cross-cultural performance the venue has ever seen. The sizable and amorphous Go: Organic Orchestra collective already serves up a fascinating kind of severe culture shock on its own, as demonstrated in several recordings over two decades. Brooklyn Raga Massive does a similar thing on a smaller scale, mainly centered around Indian instruments and forms. Most ambitious of all was the idea of combining them into an unclassifiable "future orchestra" with space for just about every flavor of sound the global musical spectrum has to offer. The faintly miraculous idea is a longtime vision for composer/percussionist Adam Rudolph, the mastermind behind the Orchestra and the two groups' meeting on Ragmala -A Garland of Ragas (Meta Records, 2019).

The album-release performance was a gloriously all-encompassing mosaic built with almost every jazz or Indian instrument you've heard of and probably several you haven't. The 31 players onstage (a slight step down from the album's 40, though nobody was complaining) contributed all manner of horns, reeds, strings, flutes, voice, electric and nylon guitar, sitar and tamboura, not to mention a range of percussion almost bordering on absurd. If an orchestra this size would seem to require its material strictly arranged down to the last detail, Rudolph is happy to defy that obvious idea as well. As on their studio recording, the affair was "improvisationally conducted" rather than actually written, which made for a free-flowing spontaneity that almost should have been impossible for a cast of dozens.

Rudolph himself was a joy to watch at center stage, gracefully striding around in red jacket and sneakers like a colorful hippie professor and playing the ensemble as one giant instrument in itself. A series of finely crafted gestures would single out individual players or entire sections to start or stop, go loud or quiet or solo over the steady patterns of others. Some pieces floated on sparse motifs that floated without obvious forms. In the heavier moments the underlying pulse would take over the stage. Steady rhythmic patterns would get staggered in odd ways; at other times odd meters might flow as easily as even ones, as in a mantric 5/4 for the bewitching highlight "Glare of the Tiger."

Whatever different places the pieces went, the transitons between never sounded anything less than natural. A calm steady tamboura drone often floated by itself to fill the space between songs. Other segues happened with small duets between sax and bansuri flute, or perhaps guitar joined with sitar. Coloring could come from a violin or harp as easily as synthesizer or tabla. Some passages got big hits of brass reminiscent of mid-century film scores, while others coasted on deep jungle ryhthms barely touched by actual melody. The first set closed on a tropical motif with more than half the players blowing into flutes or shells. For the finale of the second, it was an epically dynamic read of "Savannahs" that travelled through meticulous rises and falls in building to a room-shaking crescendo.

It's no exaggeration when Rudolph declares this music a true culmination of his wide-ranging endeavors, and "something that's never existed before." This transcendent sound collage is one of a kind in every way, and the experience of seeing it brought to life was a delight and a marvel.